Our breakdown in Gweta and subsequent detour to Maun for repairs put us off track on our journey but with some juggling we were able to still fit everything in. Our original plan was to spend 1 night in Gweta, 1 night at Kubu Island (this was closed due to flooding so couldn’t do it anyway), 2 nights in Makgadikgadi Pans National Park, 3 nights in Nxai Pan, 3 nights in CKGR and then we had built in 3 days in Maun at the end of all of this as a buffer for repairs. So we had to get creative, make a lot of phone calls and put up with some inconveniences to make it work….like making two visits to Magkadikai National Park. Double the pleasure….double the fun…that’s what driving to Magkadikai twice will get you….right? 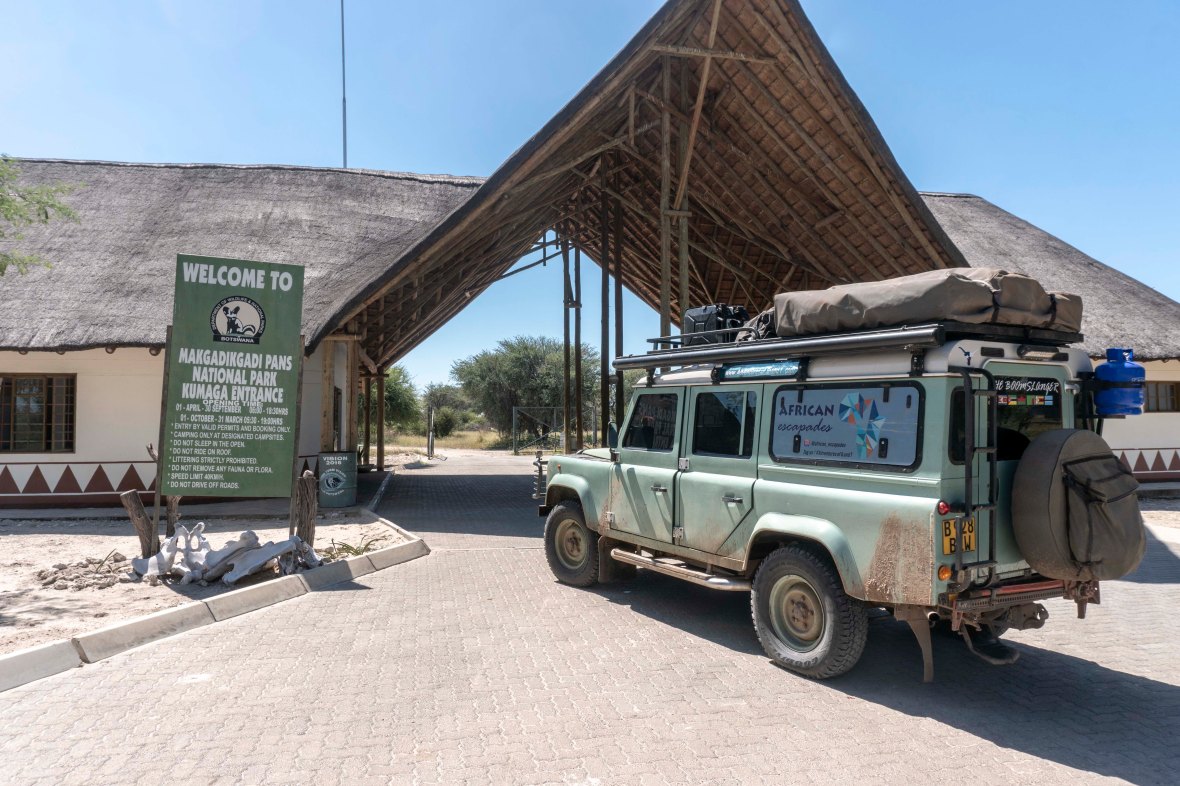 the entrance gate to the Makgadikai

The biggest problem is that in Botswana, you have to make all your reservations and payments in advance because campsites are so in demand. If there is room they will allow you to switch your dates, however many of the sites book out a year in advance so it isn’t likely you will be able to switch dates. The Makgadikadi area is not very busy in May so thankfully we could easily switch our reservation dates. The CKGR is fully booked for basically the whole season so we had to make sure we got there on time. We only had one extra night to spare before our CKGR reservations so we decided to split up our time in the Makgadikadi area. We drove down from Maun to spend one night in Khumaga which is a campsite on the Boteti river on the west side of the Magkadikadi. It was a bit of a pain to have to enter and exit the park for one night because you have to take a pontoon boat ferry to get across the Boteti. Although it was pretty awesome to get Boomie on a makeshift pontoon boat with an occupancy of one — it costs $30 round trip and takes at least 30 minutes to cross.

We made it onto the pontoon – very nerve racking driving onto that narrow ramp! 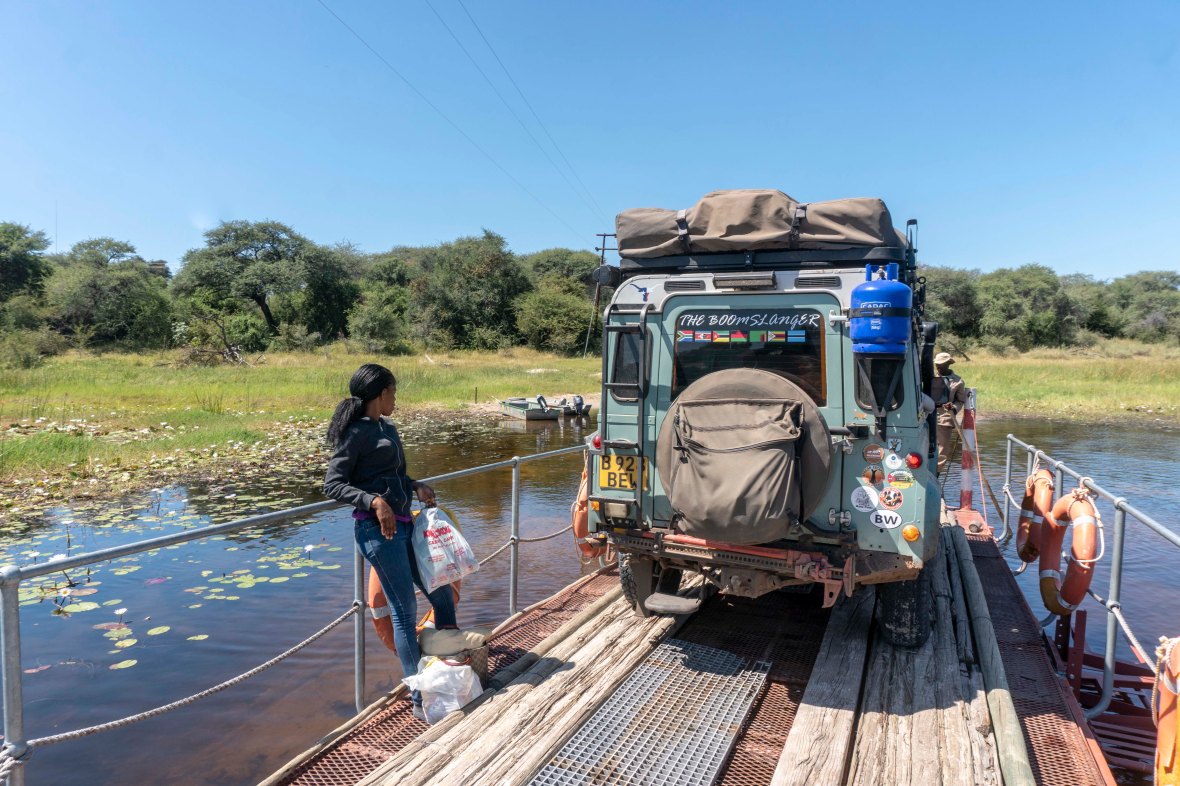 The Khumaga campsites are excellent. They are run by SKL which is one of the better lodging companies. They had good ablution blocks which looked brand new and had hot water. Staff would come around in the morning to empty trash and clean up campsites so everything was in good shape. The sites are a little closely packed so you don’t have much privacy. One of the sites is right up against the river and allows you to watch the sunset over the water. I wish I could remember which number that is! 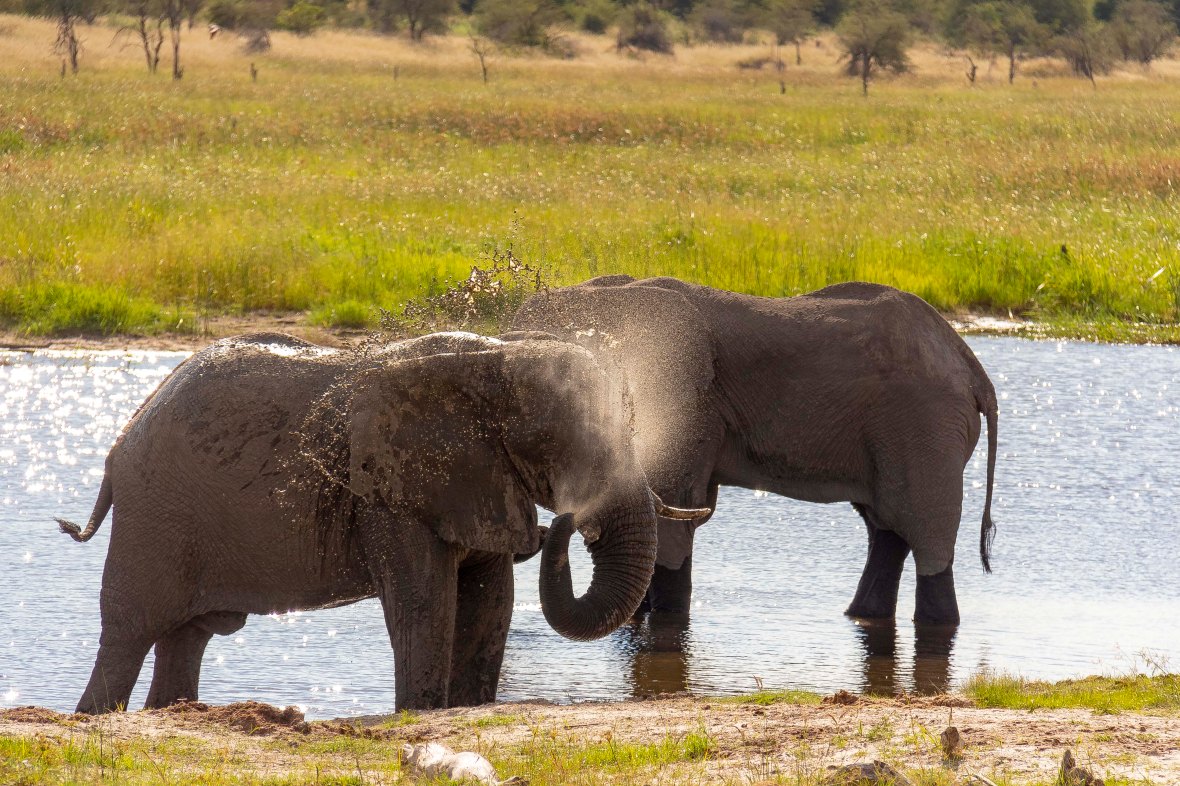 ellies cooling off in the Boteti River

We did great afternoon/sundowner game drive along the Boteti River which is stunning. Typically this is a really great area for game. In the dry season animals are packed along the river. We saw plenty of elephants leisurely wading through the sparkling blue Boteti. It was picturesque to say the least. A pack of ellies came running down to the river right in front of our car which was a great sighting. I hope we can get back to this spot during the dry season because it is a really special place.

In order to keep on track with our reservations, we did a quick early morning game drive, again crossed the Boteti pontoon boat and made our way out of the park and west to the Motswere Gate of the Central Kalahari Game Reserve (CKGR). Thank goodness we were able to keep our CKGR reservations because it ended up being one of my favorite spots on the whole trip (detailed in another post). Also there really was NO availability for campsites which isn’t typically the case. Usually there is some wiggle room and they will fit you in somewhere if you show up. Not the CKGR! We met multiple clueless travelers who showed up without reservations and were forced to do day trips in the park and sleep outside which is really crappy.

After our wonderful time in the CKGR, we backtracked east to finish up seeing the rest of the Makagikadi. We stopped in Rakops on the way there, hoping to find a grocery store….unfortunately it is a tiny village that has only a small “general store.” Only a few packages of frozen meat…..nothing fresh….not even a stick of butter! Thankfully we found some water jugs which is what we needed the most.

We then repeated our steps and crossed the Boteti by ferry. The pontoon guy must have thought we were crazy! 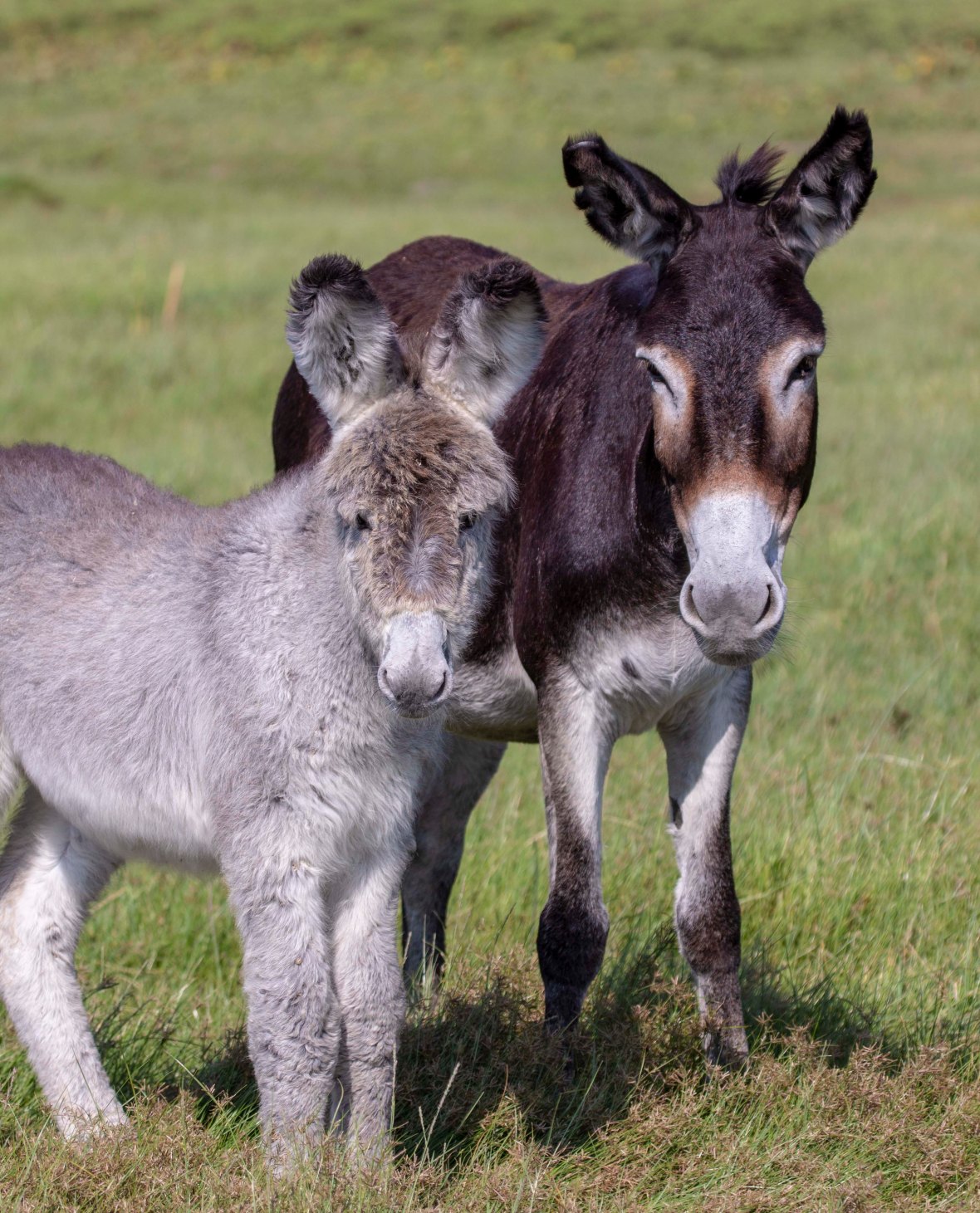 I couldn’t believe how cute this baby donkey was!

We had been told the best place to see wildlife in the Magadikadi in late april was the eastern edge near Tree Island so we spend the night there. We arrived to the park rather late so we had to make a large portion of the drive after dark….which is not allowed. We were lucky they even let us in the gates!

sunset as we drive towards Tree Island

As we made our way through the darkness, we saw a civet, an African wild cat and a few owls in the road along the way. Tree island is VERY isolated. It sits on the edge of Ntwetwe pan which is the well known “salt pan” you think of when you hear about the Magkadikadi. You can typically drive across the pan, but because of the late rains in Botswana this year it was still soggy and not safe to drive on.

cattle egrets huddled along the water

There was a lot of bird life in the flooded pan bordering the campsite but not much else around Tree Island. It is, however, a really cool camp site. We definitely had some trouble finding the site in the pitch black of night. We could only see the silhouette of the large canopy of trees against the bright starry sky telling us that this was the right place. By morning light it became apparent that we were really the only people for miles and miles ….surrounded by salt pans and desert savannah. 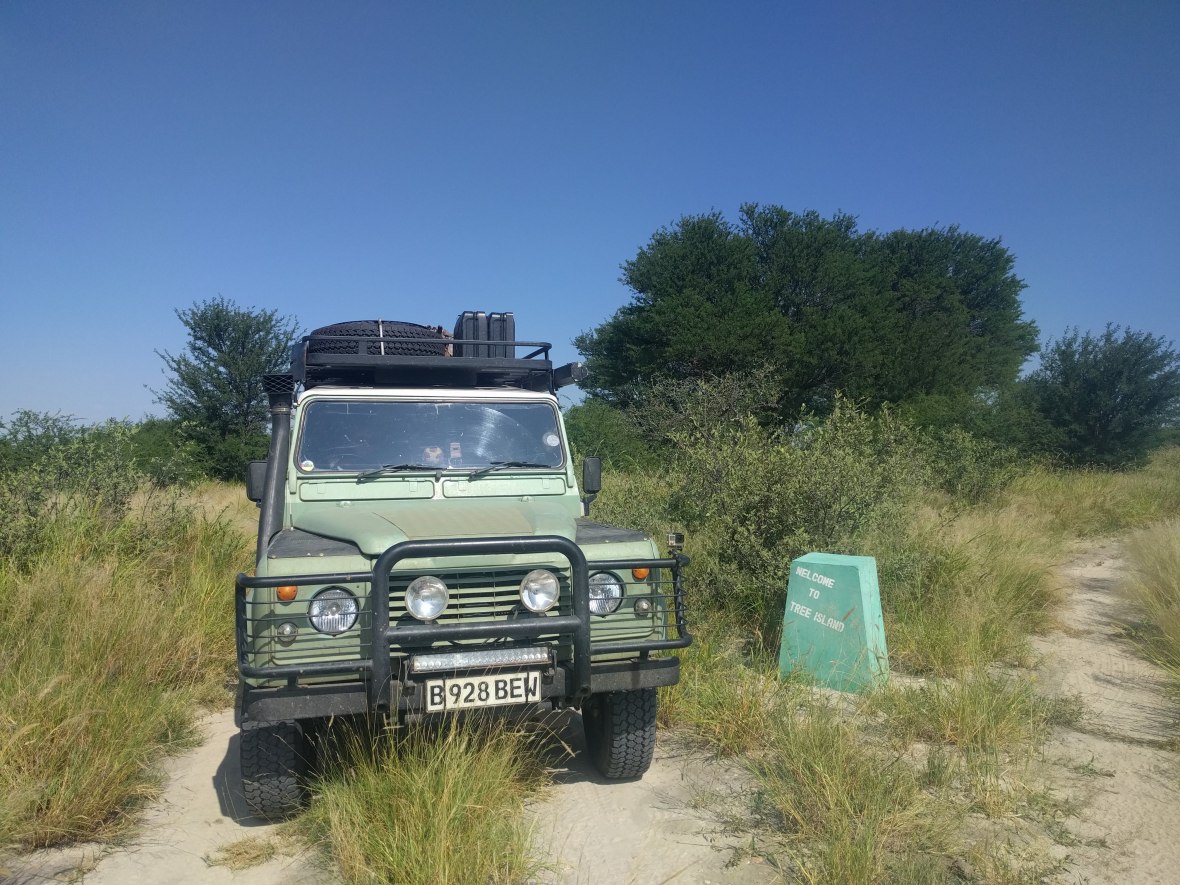 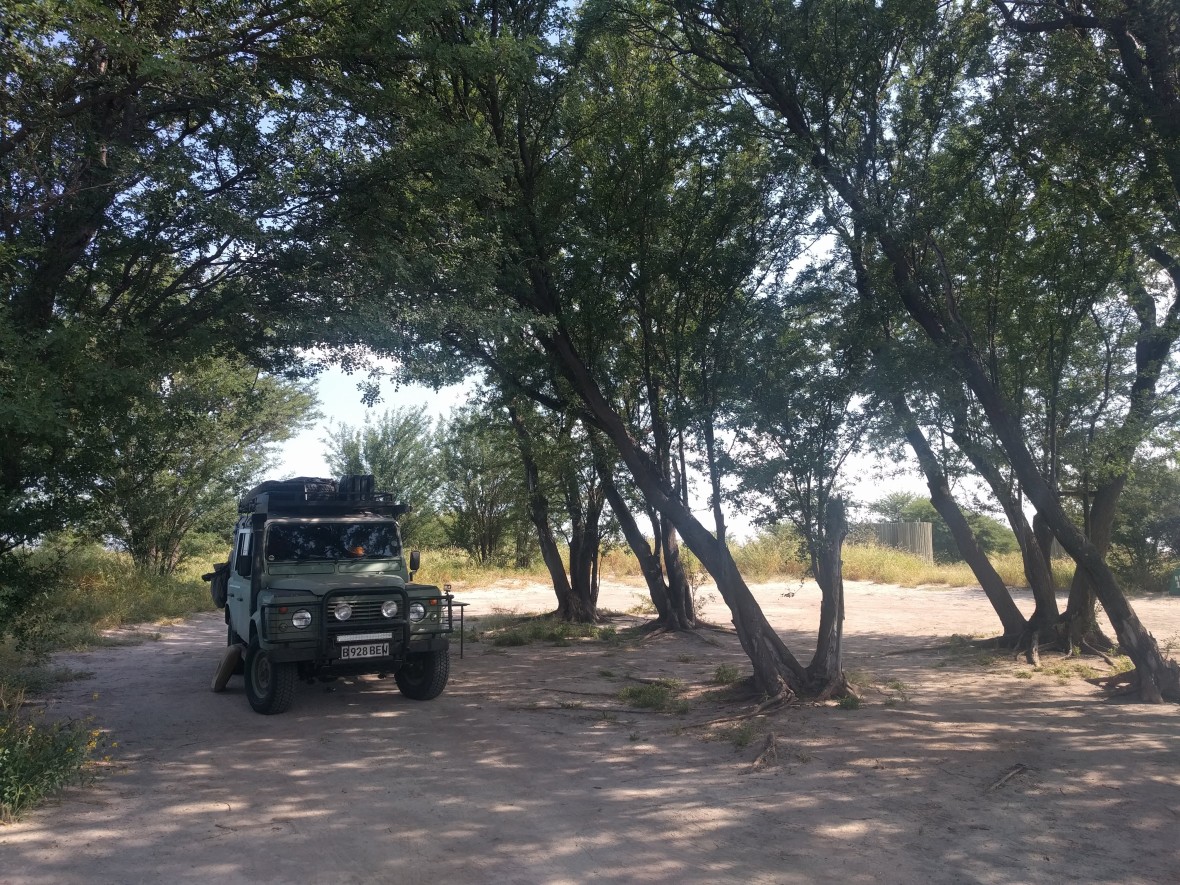 camping under a canopy of tress on Tree Island

The zebra migration is supposed to occur in April/May during the wet season. We didn’t see a single zebra on the drive in or when we woke up….so we were starting to think this whole migration talk was just a muth. Seeing the migration was the reason we doubled back to stay the night at Tree Island after the CKGR…..so we weren’t pleased!

Since there wasn’t much wildlife around Tree Island we started heading north east where we would exit the park and move on to Nxai Pan. Slowly… herds of Zebra began to appear across the horizon. Yipee! It wasn’t the solid packs of thousands that I had imagined the migration to consist of, but instead smaller pods of 20-30 were traveling together. In all directions you could see zebra running wildly across the pans, and through the tall savannah grasses. I jumped up on the roof and we followed them in all their wild glory. There is just something so liberating about riding on the top of a land rover. Its against the law so obviously that makes it all the more exciting. You have such a different vantage point – as if you are flying. And there is the added thrill of potentially being “bucked” off with any coming bump. Its really the best way to safari! 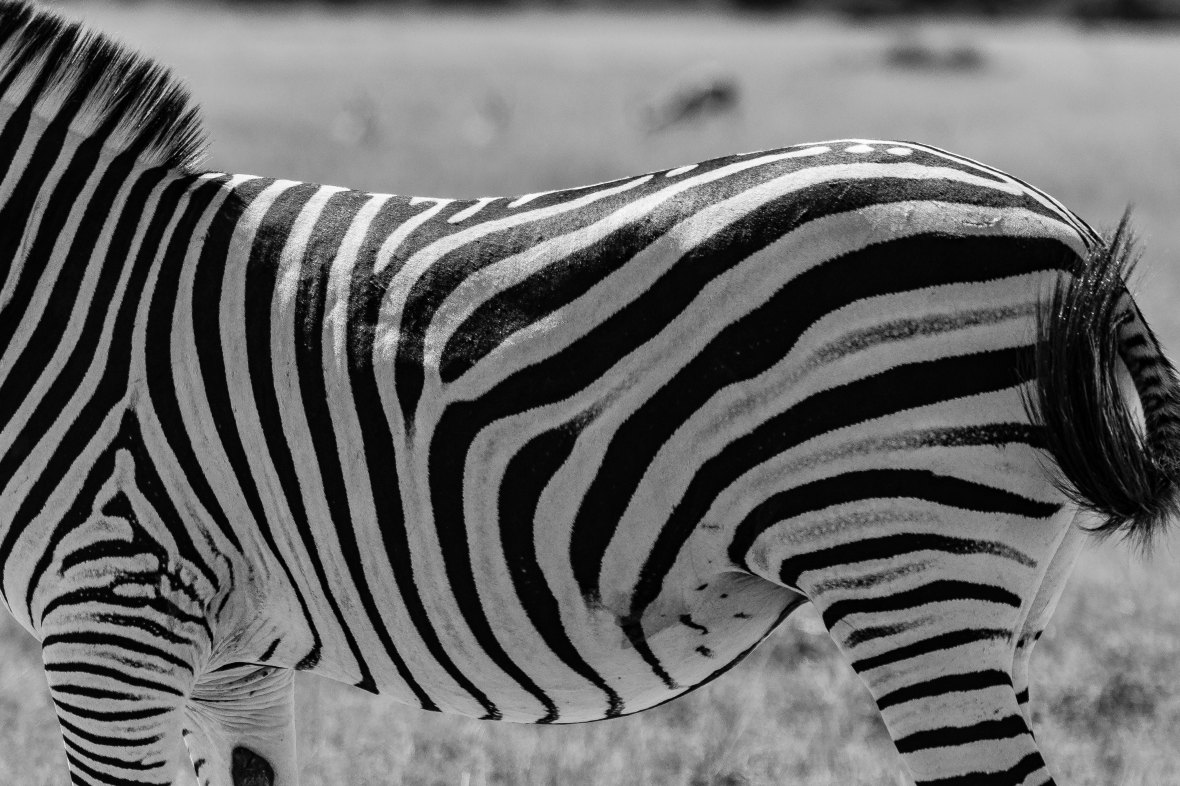 I am sure if we spent more time and traveled south in the park we could have seen zebra for days and days, but I was quite happy to have seen part of the migration and I was even more excited to move on to Nxai Pan.

we found a “wake” of vultures along the side of the road driving to Nxai pan. They were eating a cattle carcass

The Magkadikai is best visited in the dry season because the main attraction is the salt pans which you can only drive across when they are completely dry. You’ll also find quite a bit more wildlife during this time. The famous luxury safari camps – Jack’s Camp and Meno-a-Kwena (where Prince Harry proposed to Megan Markle!) are located in Magkadikai NP, so clearly it is a fabulous place! I am really grateful that I had previously visited during the summer and spent a night out on the pans. Sadly Garrett was not with me, so he still needs to experience the true beauty of the salt pans! Just another reason to come back to this area the next time we are in Botswana.