I’ve always wanted to have a Christmas in July part but it never really made sense to do it when it was blazing hot during the summer in the US. So living in Botswana where its pretty darn cold in July made it a perfect opportunity to check this off my bucket list. The fact that it could coincide with my birthday (just a few days away on August 1st) made it even more perfect! 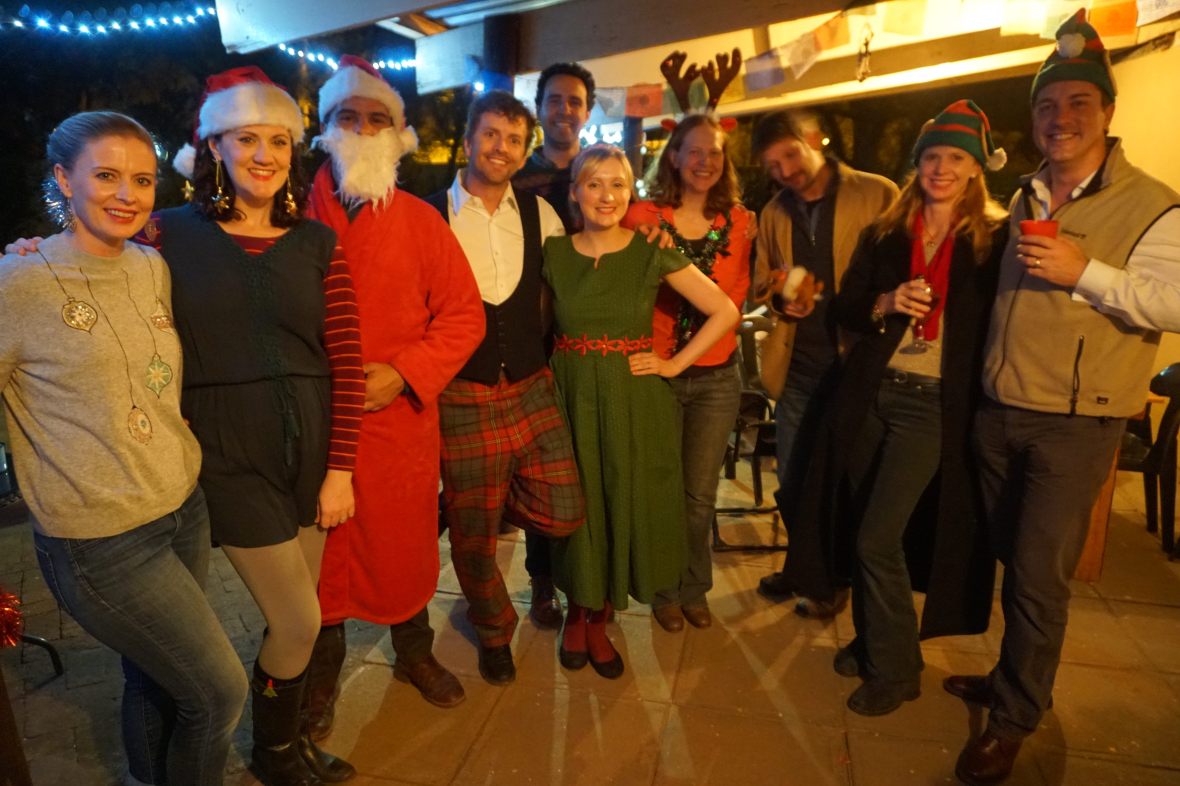 Doing anything with a theme is tough in Gabs because there just isn’t the same kind of access to things as we had in the US. There’s no Hobby Lobby, Michaels and worst of all NO AMAZON PRIME! You don’t realize how much you rely on amazon until it is ripped out of your life unwillingly! Garrett and I used to conjure up costumes weekly for Denver Cruiser rides from miscellaneous items we could easily find around Denver or would just order things on amazon to arrive the next day (now I hear you can even get them same day!). In Gabs you will be hard pressed to find anything costumy. Christmas decorations become available for only a few weeks in December and are pretty sparse as it is! Luckily we had brought a few items with us but even more lucky is that one of our American friends who has been living here for over 8 years has a plethora of Christmas decorations. With her help our backyard became a tacky Christmas wonderland! 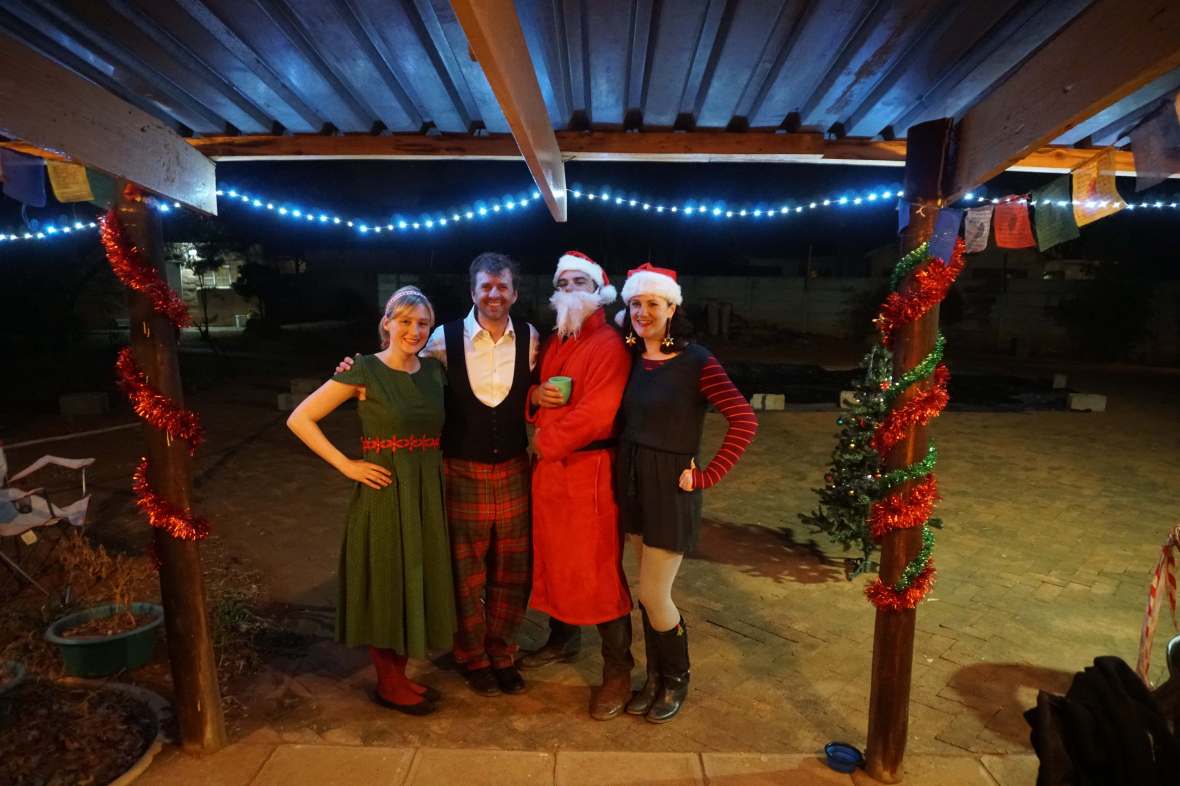 Garrett luckily already had access to the perfect Christmas outfit to wear. A friend had recently loaned him a tux that used to be his formal uniform in British military school. It consisted of a normal black vest and jacket – but the pants were red/green plaid! And it fit him perfectly – it was actually pretty amazing. So how was I going to compete with that! I had nothing to wear! But in Botswana, when we can’t buy what we need – we have just learned to make it! I went to the fabric store and picked out a christmasy pattern. I decided on a Betty Draper-esque style that I tried to communicate to my tailor. Luckily it turned out great – a little big but that is always better than too tight! 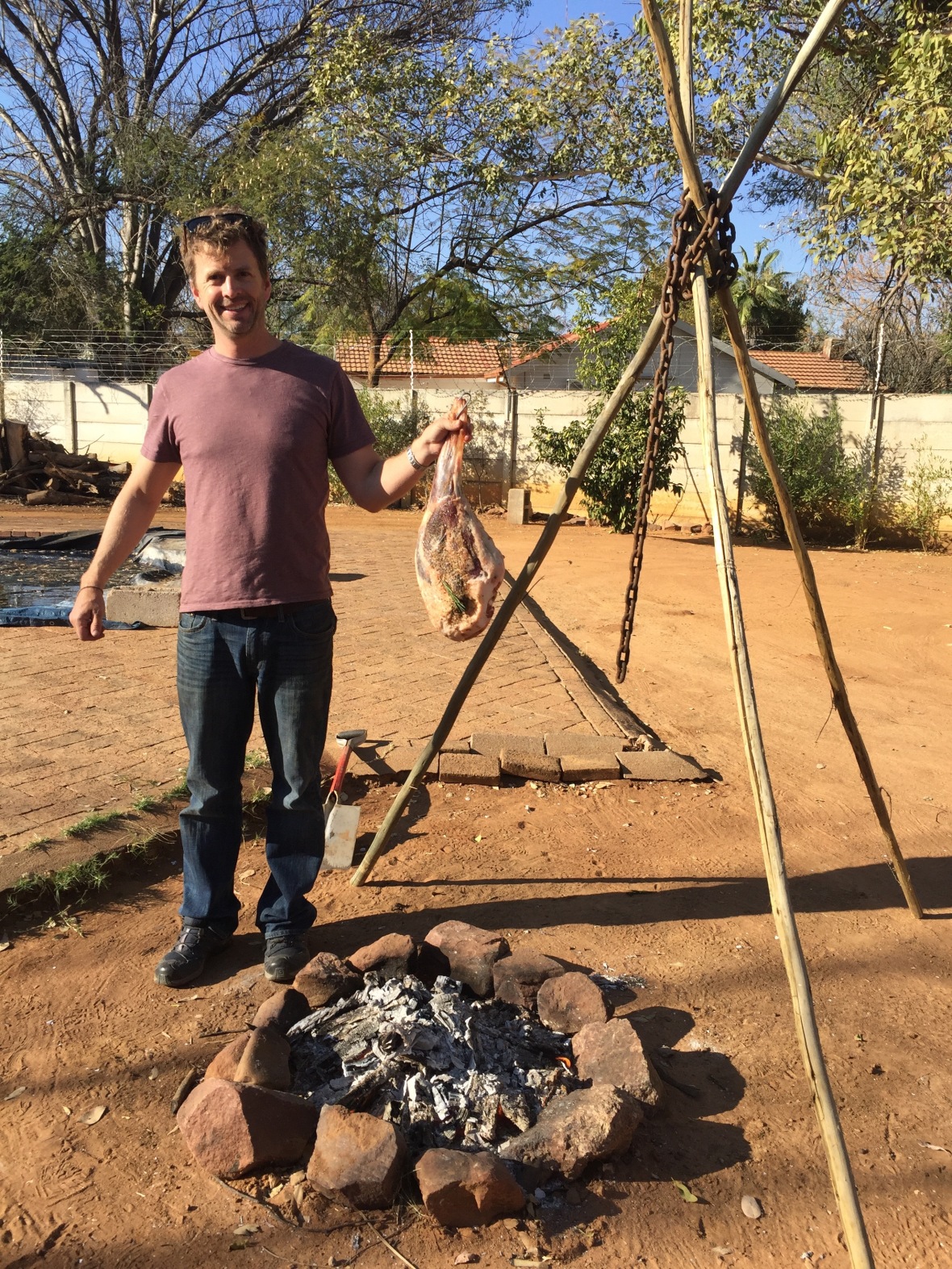 Deciding what to cook was the next step. We wanted to try out a new way to cook lamb that we learned during our trip to the Serengeti. They just shoved the leg into the sand and let it roast slowly next to the fire. Our ground is too hard to do that so Garrett built a tripod to allow the meat to hand and roast over the fire. Then we also marinated a warthog and cooked it on the weber grill. We had stuffing, glazed carrots, mashed potatoes, green bean casserole and loads more holiday treats. I made apple cider and mulled wine. Then had a holiday Moscow mule station ( a twist on the traditional with cranberries and rosemary) – people really hadn’t tried Moscow mules before and were really loving them! 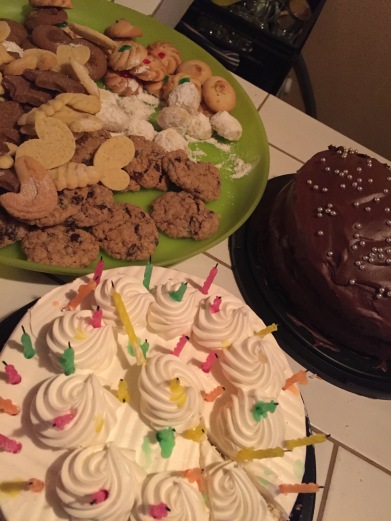 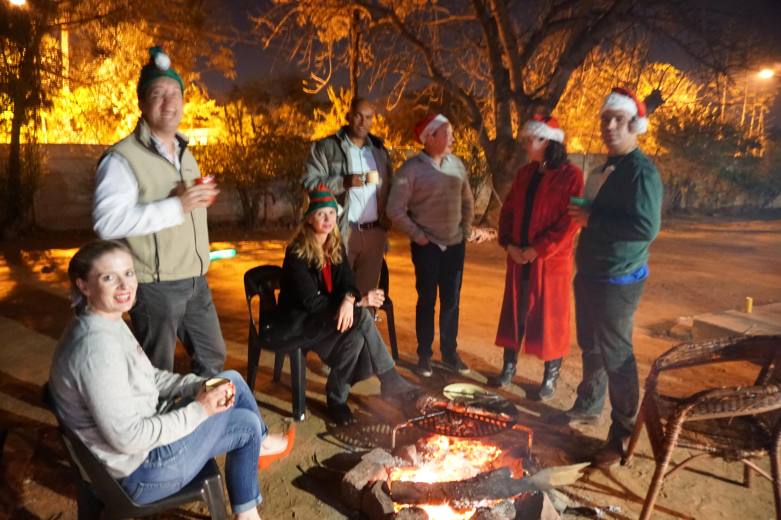 People aren’t so into dressing up here so we weren’t sure if anyone would be getting into the festive spirit. Of course not everyone dressed up but we were really impressed with some of our friends. Our friends Dale and Bri improvised a santa and elf costume which were awesome. We had a few ugly Christmas sweaters and lots of santa hats. It was an awesome party and a great way to celebrate my birthday. I am happy to be able to finally say that I have thrown a proper Christmas in July party! 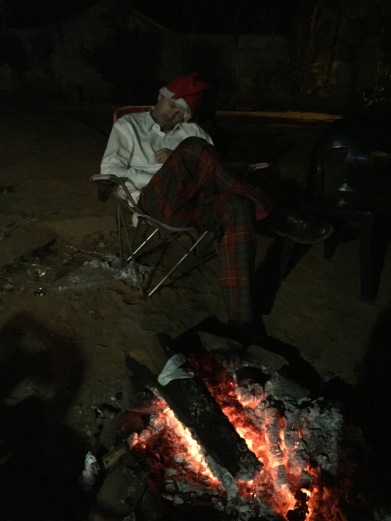 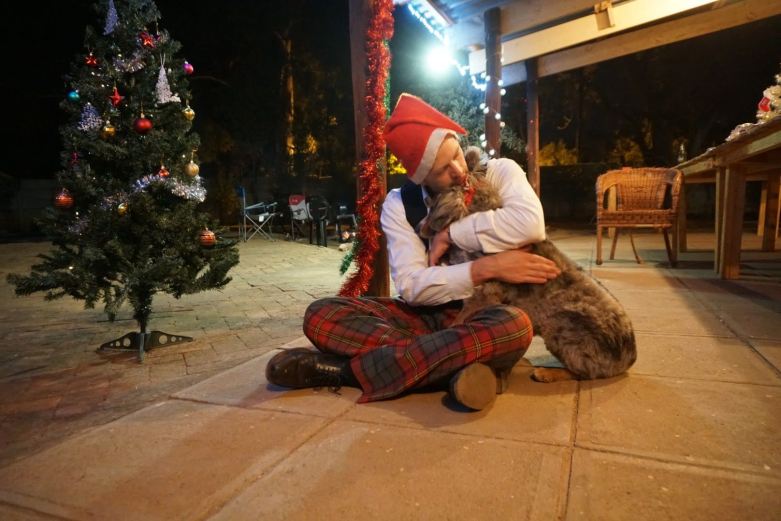 Fantastical light patterns over Sand Beach at Acadia
Fall in Acadia #fall #travel #nationalparksusa #maine
Favorite wildlife experience ever - crawling on our hands and knees up to a pack of wild dogs!! We found the pack in Mana (where you are allowed to self drive/walk), we crawled up so they wouldn’t get scared off/disturbed. As we approached a warthog made a bad decision to walk by and the pack took off after him and flew by us!!!! Thrilling!! This is not something to do if you don’t have significant wildlife experience- we know wild dogs don’t hang out in areas where other large predators are and there have literally never been any reported attacks between the dogs and humans. Still always must proceed with respect and caution around all wildlife! @glister22 #zimbabwe #manapools #wilddogs
An ode to Skippy! We found this rum in Zim named after our doggie @skippylister who we miss very much when we travel. Too bad it tasted like petrol 🤪 @glister22
Our beautiful campsite on the banks of the Zambezi at Mucheni 2 . Nice shade, great views and a nearby pond for bird watching. But of course we had some stealthy baboons make a few raids 🙈 #zimbabwe #zimparks #manapools
Heading into Mana Pools in our Britz rental. We definitely missed having Boomie but were glad to cut out 2 days of driving
Gas lines in Zim are no joke! We were lucky to have some help from local friends or else we just wouldn’t have made it to Mana! Every petrol station we saw in every town had a line stretching for blocks! It took us a whole day to get supplies for our hilux rental since we decided not to drive Boomie to Zim
Typical village scenes from rural northern Botswana. Square or round thatch roofed huts, simple natural wood fences, lots of cattle, small tuck shops to get basic goods, central village water pumps, tiny one room health posts, and nearly all are connected to the electrical grid
Brought some nice new flare for Boomie from Peru! #llamalover #landrover #defender #landylover #overlanders #overlandafrica #landroverdefender
Most people think of Botswana as flat and dry - but driving across you will find areas of green lush hills and lots of kopjes jutting out (rocky cliffs) #botswana #camping #overlanding #overlandafrica #safariguide #safariadvice #africatravel #defender #landroverdefender #landylover
This was our second visit to the Kuru Arts Project in D’kar Botswana which is one of my favorite community development programs. The program supports local San Bushman to use art as an expressive outlet for their cultural traditions and a source of much needed income. I am obsessed with the genuinely unique colorful style of the art #art #localculture #tradition #bushmen #botswana
CAUGHT on camera! A very clever honey badger knows how to take down a latched trash can. He knocked it over so that gravity would be pulling on the latch, then he dug out underneath so that the latch would drop down into the hole and he could climb in! He visited us every night while in Savuti camp 7 #honeybadgerdontcare #honeybadger #gamecamera #botswana #camping #safari #overlanding4x4 #overlandafrica #travelgram
Last year water was up to the bonnet in Moremi and Khwai....this year river crossings were a breeze and allowed us to explore more areas. But we still always check the depth just to be sure!
Many people love Khwai northgate camp so we decided to give it a try but we definitely prefer Khwai community camp! The location of the campsites is lovely but they are really packed in together which made things quite noisy #botswana #camping #overlanding #overlandafrica #safariguide #safariadvice
If you want to see a wet delta this year, you’ll have to go far west. Vumbura Plains is an absolutely stunning camp set on a permanent lagoon so you can do water activities and game drives year round. The rooms are HUGE - my favorite part being the dramatically elegant central shower draped by a grand canopy of white curtains. Massive balcony with plunge pool, private dining on your deck and a unique modern design style. Game viewing and overall experience was fantastic! #wearewilderness #safariguide #okavango #botswana #botswanasafari #travelgram #safariblogger #africasafari #overlanding #explorebotswana #africansafari
Follow The Adventures of G & T in AFRICA on WordPress.com