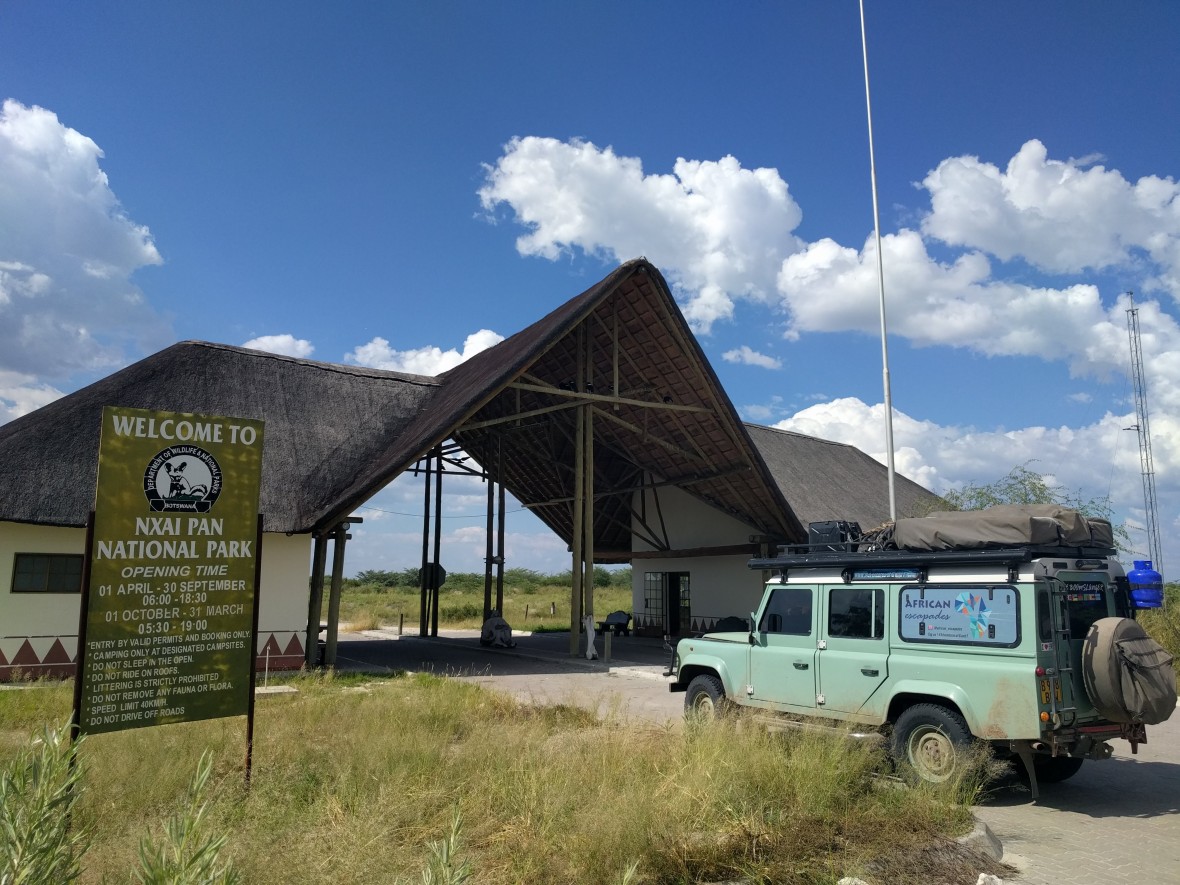 Only recently, have we started hearing a lot of buzz about Nxai Pan National Park. It is one of the lesser known game parks in Botswana which is now growing in popularity. The name Nxai is derived from the Khoisan language and the “X” represents a palatal click sound which means the word Nxai is pronounced much different than you would expect! It took me a while to figure out what people were even saying….and even longer to attempt the correct pronunciation myself! 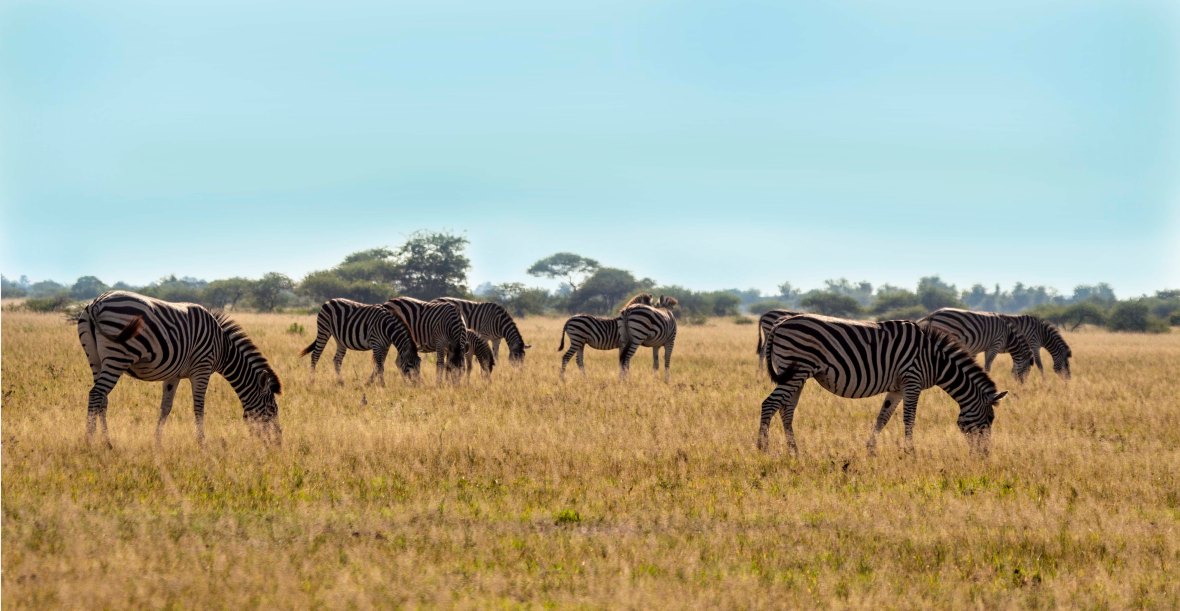 zebra grazing on the plentiful but short grasses of the pans

I pictured Nxai Pan as a salt pan and it technically is a salt pan but in the green season it becomes filled with a short layer of grass. People say it is reminiscent of the Serengeti’s savannas because of the vast open space the huge pans create. Since we have been traveling in the green season, really tall grass has covered most of the landscapes so I was really excited to visit a place with clear open areas that would allow us to spot animals more easily. 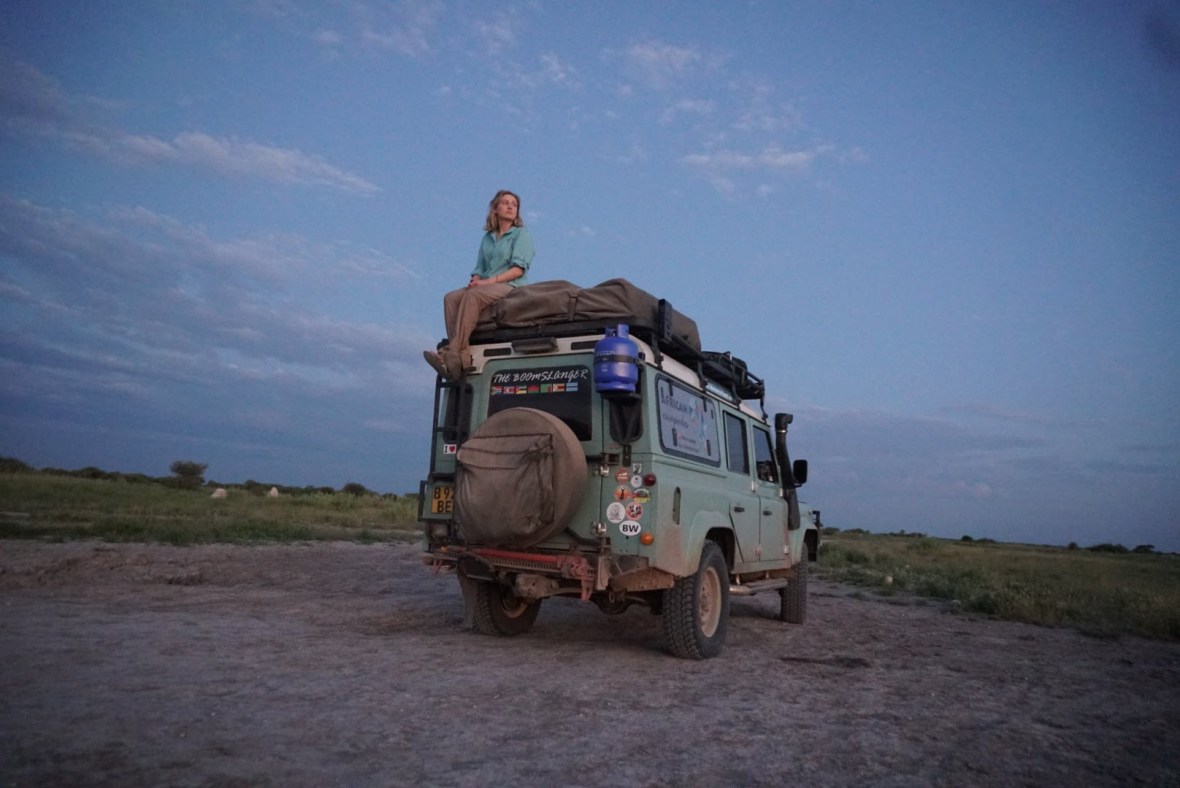 watching the pans at dusk

We had planned to camp at Baine’s Baobabs which is a famous “island” of massive millenia-old baobabs which sit picturesquely in the middle of a salt pan. It was made famous in 1862 when the painter and explorer Thomas Baines visited Nxai pan along with John Chapman on their voyage across the wilds of Botswana up to Victoria Falls. The two discovered the oasis of giant baobabs as they crossed the vast empty  Magkadikadi salt pans by horse drawn wagon (can you even imagine!). Baines then painted a famous scene of the baobabs and ever since it has become a hot spot for adventurers to visit and see for themselves.

Today there are campsites scattered under the canopy of trees. I had been eagerly looking forward to the experience of sleeping under these giants and the amazing opportunities for night photography it would bring …but rain foiled our plans. Late and heavy rains this year totally flooded the pan around the Baine’s Baobabs so the campsites were closed off during our visit. We had to relocate to South Camp in Nxai Pan… which was devastating. 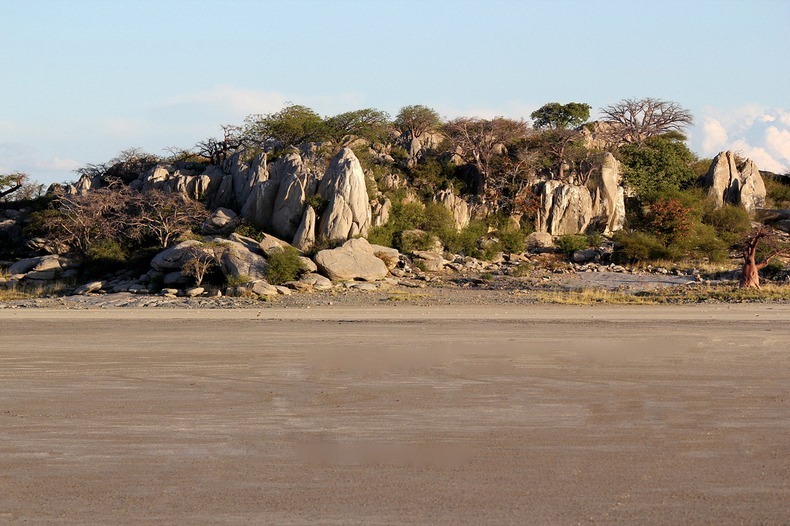 the rocky oasis of Kubu Island….not to be seen on this trip

We also missed out on Kubu island which was similarly flooded. This is another famous rocky/tree studded island in the middle of the Ntwetwe salt pan. We will definitely be making a trip back to these areas in the dry season to fill in the gaps we missed due to the rain. 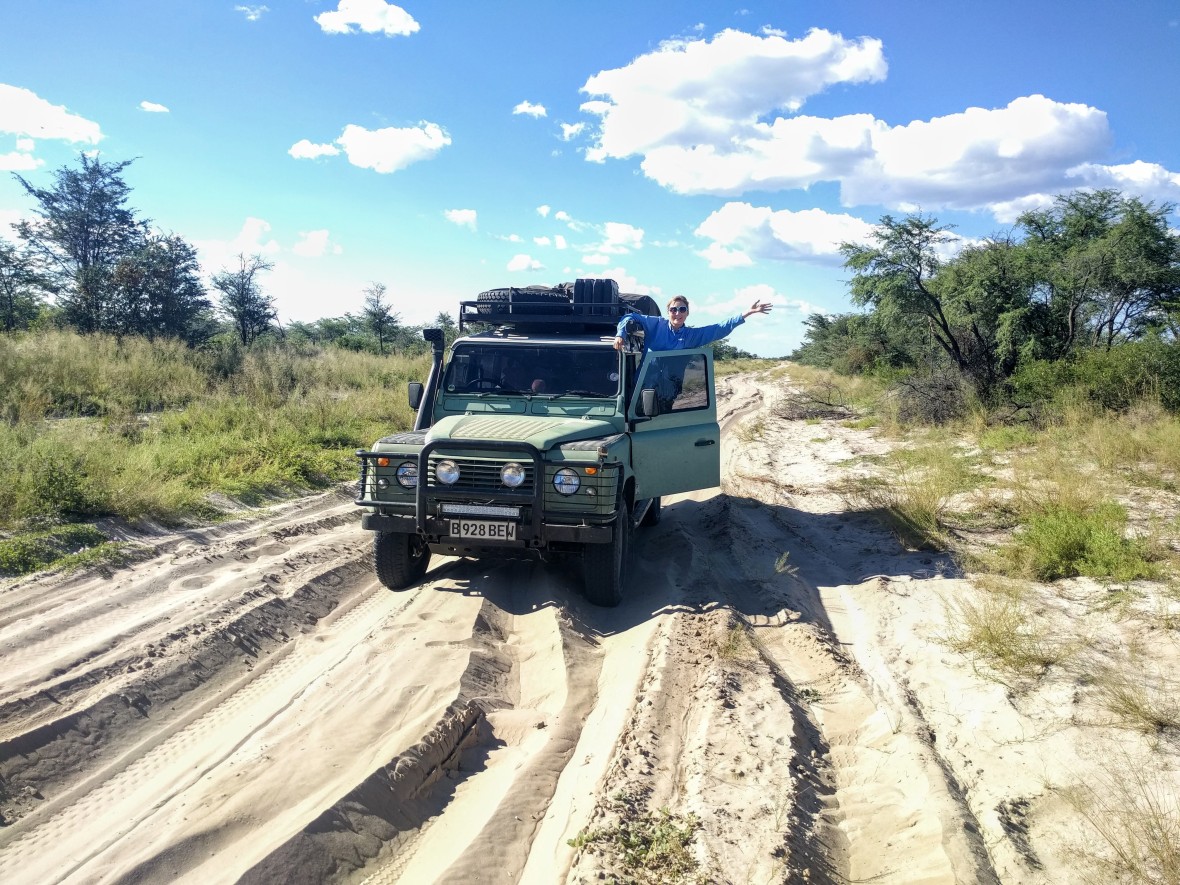 slowly making our way into the park

The rain also really reeked havoc on the roads into Nxai pan. Just one week prior it was almost impossible to drive through most of the park . We were lucky that our breakdown forced us to delay our trip by one week because the conditions had improved significantly when we arrived. The main road to the park was still washed out so we had to take a detour. The only way to get into the park was 35kms on a deep soft sandy road. This was actually the most difficult sand road we had encountered up to that point. Everyone said the CKGR had the most difficult sand roads, but by comparison those were easy! Thankfully once we reached the park, the roads were all in good conditions and easily passable. 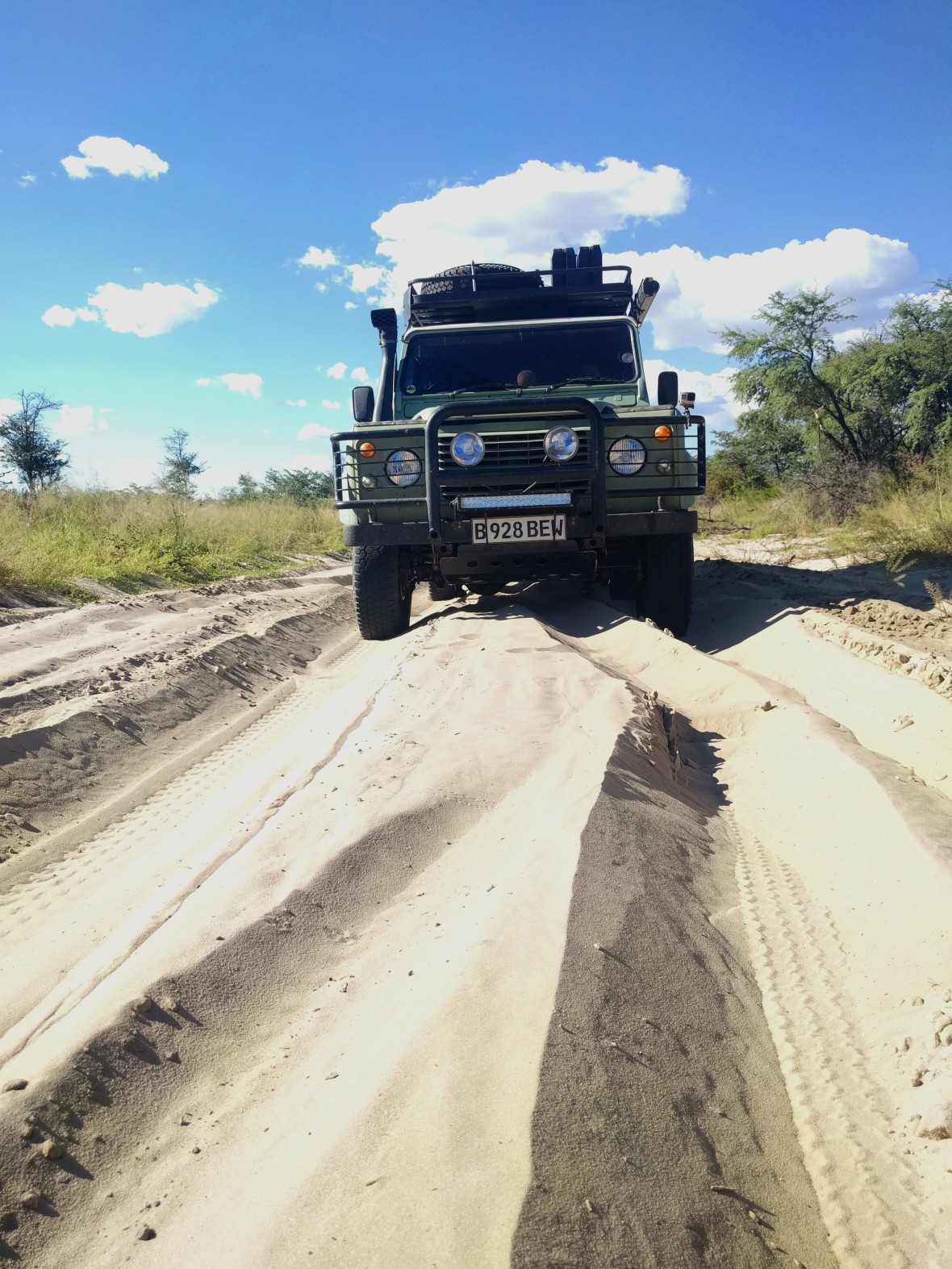 soft and deep sand is the hardest to drive on

My biggest hope for Nxai pan was to see a cheetah kill. This is one of the best places to see this because of the wide open pans that are perfect habitats for cheetah. When we pulled into the park we met an Israeli guy who reported just seeing a cheetah at one of the waterholes. Jackpot! I was enthralled by this gentleman who was a hemi-plegic traveling across Africa driving his own car! He had driven all the way from Israel! The roads are hard enough to drive when you have full use of your arms and legs, I can’t even image trying to navigate with a disability. I was very humbled and impressed by the courage and spirit of this man! 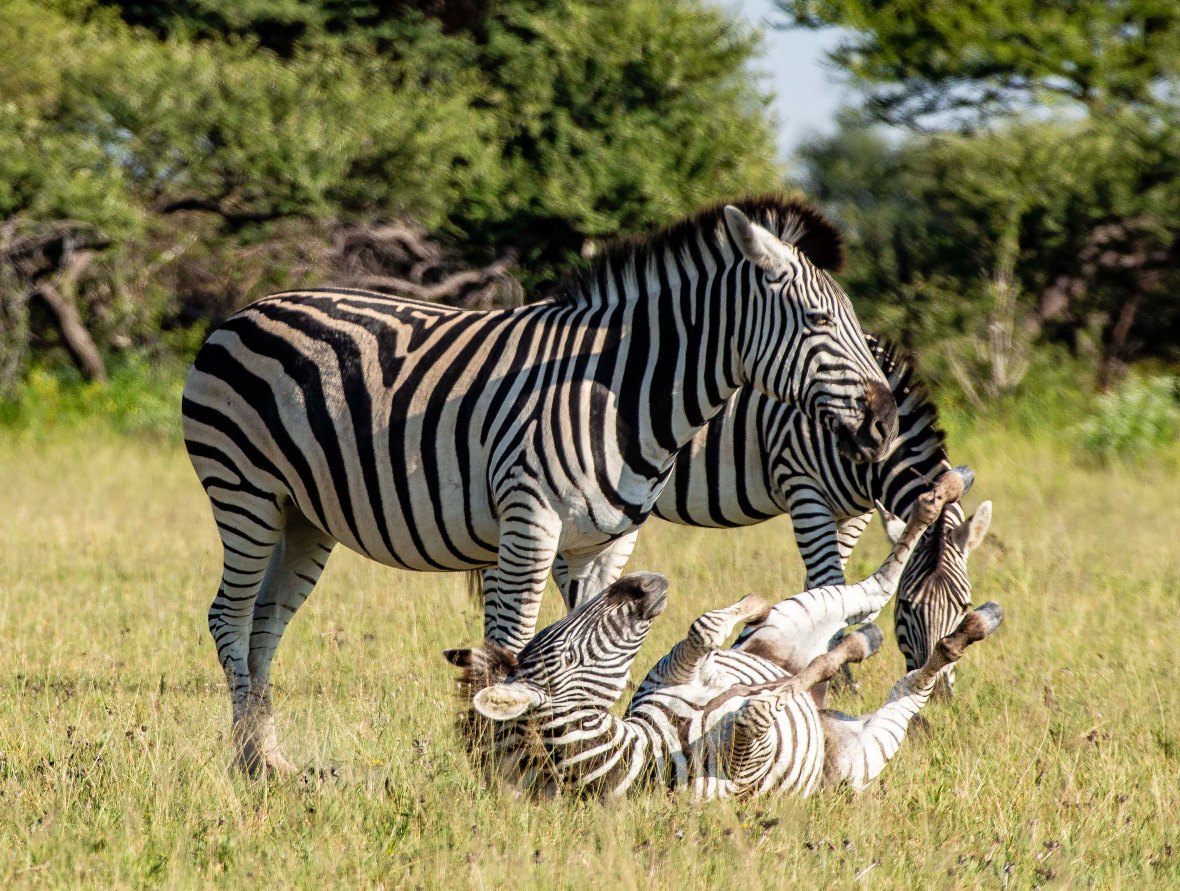 caught this baby zebra rolling over

After this interesting encounter, we sped off to try to find the cheetah. No luck. Blast! We only saw one other car on the pans which was a filming truck – they told us that 4 cheetahs live in the pans and can be seen almost every day. The film guy was super obnoxious – he condescendingly said “Here’s what you do if you want to see a cheetah. Just sit on the edge of a big pan, put your glasses on and look for the ears. You’ll see just the silhouette. Or just sit next to their food the springbok. You can’t miss them.” Thanks a lot asshole. Its not that easy! Cheetahs are incredibly tough to spot if they are lying down.

The campsites at South Camp were some of our least favorite on the trip. They were crammed really close together. Luckily we didn’t have anyone at the campsite adjacent to us or else we would have really struggled with noise. They had a nice ablution block but it was built like a fortress to protect from elephants. I’ve never seen anything like it. An electric fence and sharply pointed cement blocks with metal spikes lined the perimeter. It definitely made me nervous trying to navigate my way in at night. Not a place for kids! 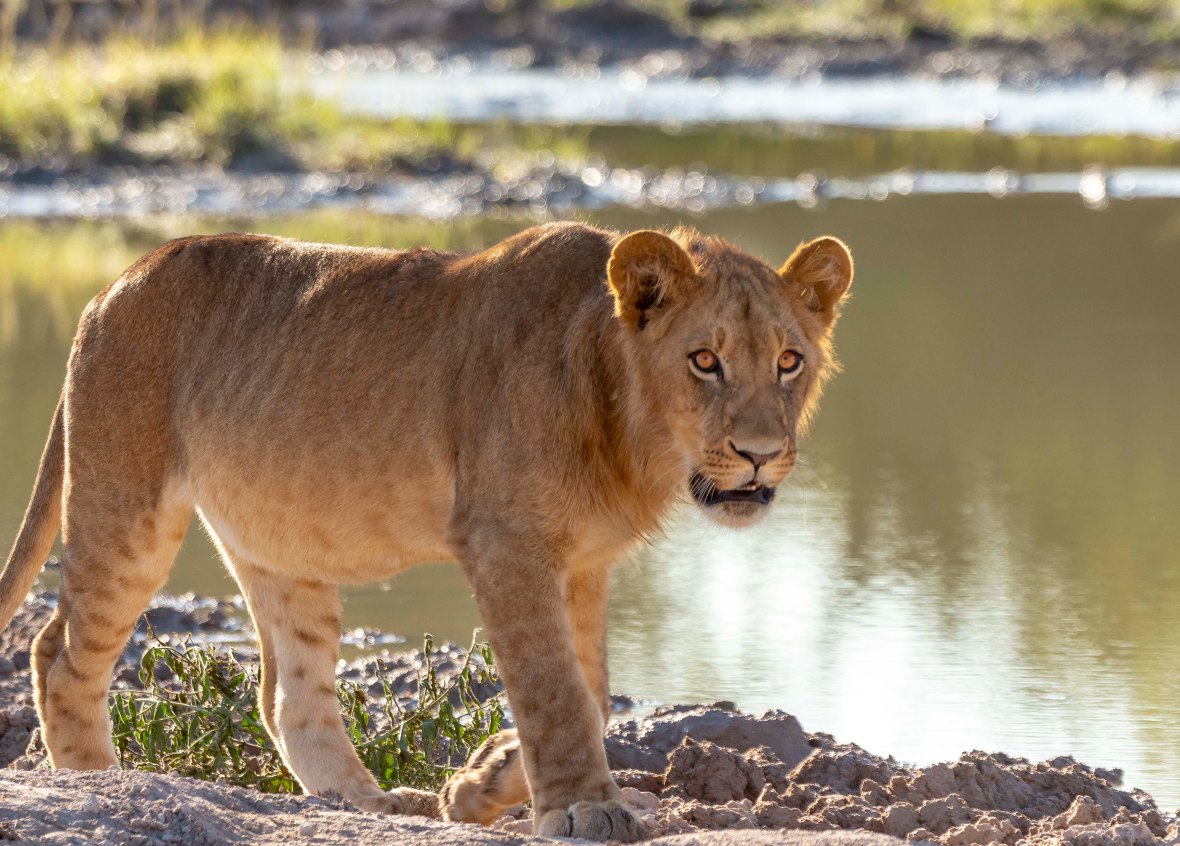 great pride of lions spotted at this waterhole

We had planned to spend two nights at Nxai pan, but plans changed when we noticed some car problems. Garrett noticed that the nut which tightens the drop arm (which connects the steering wheel to the wheels) was loose. It had gotten pulled loose during our towing incident. Also the car was leaking oil from the gasket, one of the hoses was lose and the steering damper was loose. Garrett tried to fix the loose nut but was unable to find a wrench big enough. We only had one half day to spare before our reservations in Moremi started so it was in our best interests to get back to Maun so we could try to get these things fixed before we ventured out into the isolated wilderness of Moremi, Khwai and Savuti. 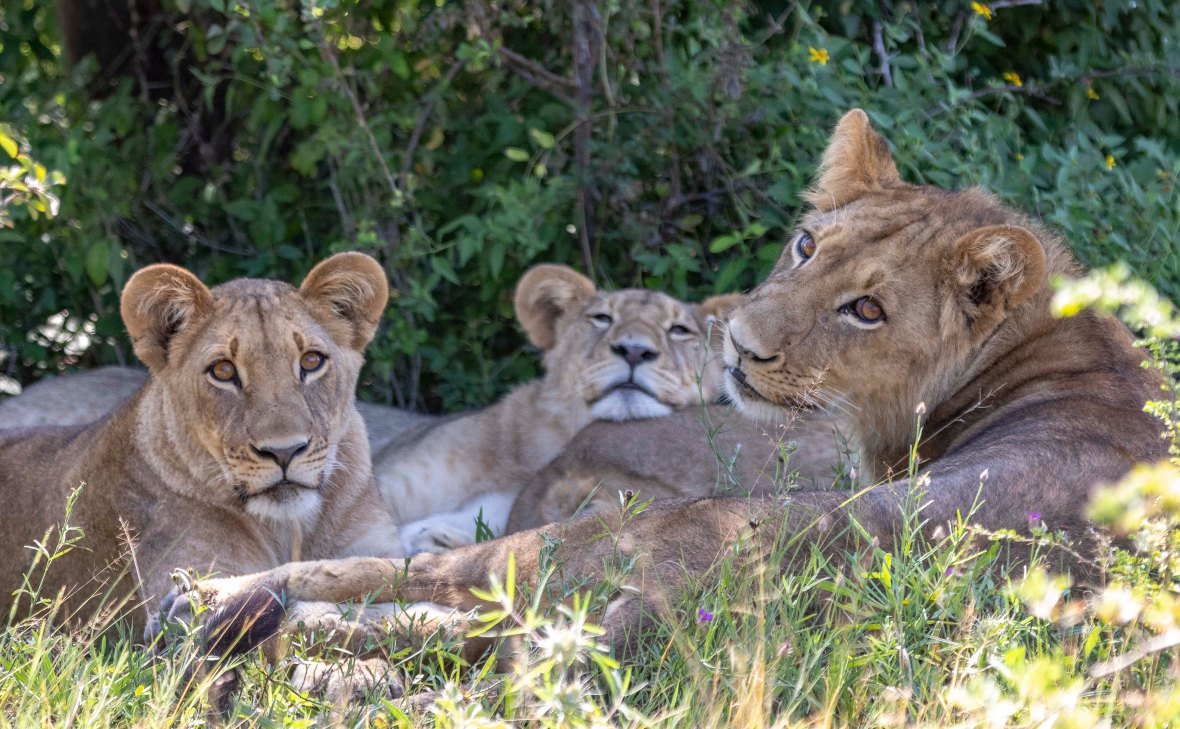 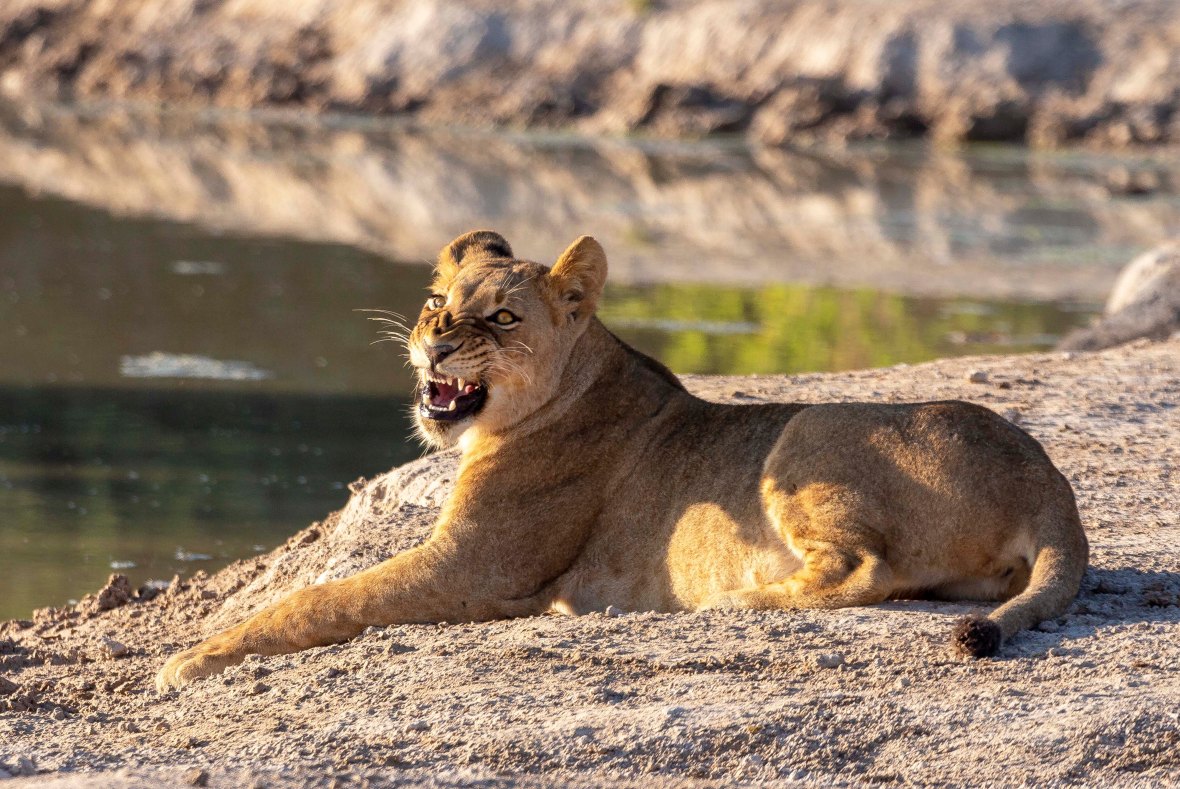 We got up really early and absolutely scoured the pans for cheetahs. We made multiple loops at each pan. No luck! However we did find a nice pride of lions. Nxai pan also had a lot of elephants, oryx, springbock, impala, jackal, zebra, giraffe and loads of birds. 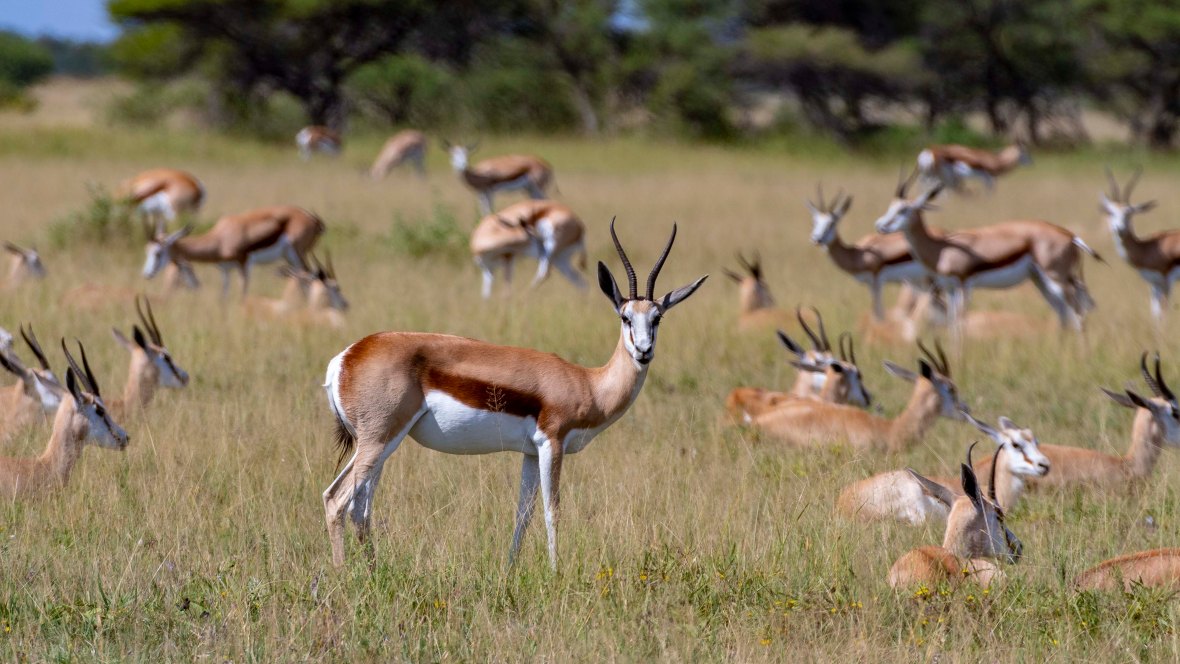 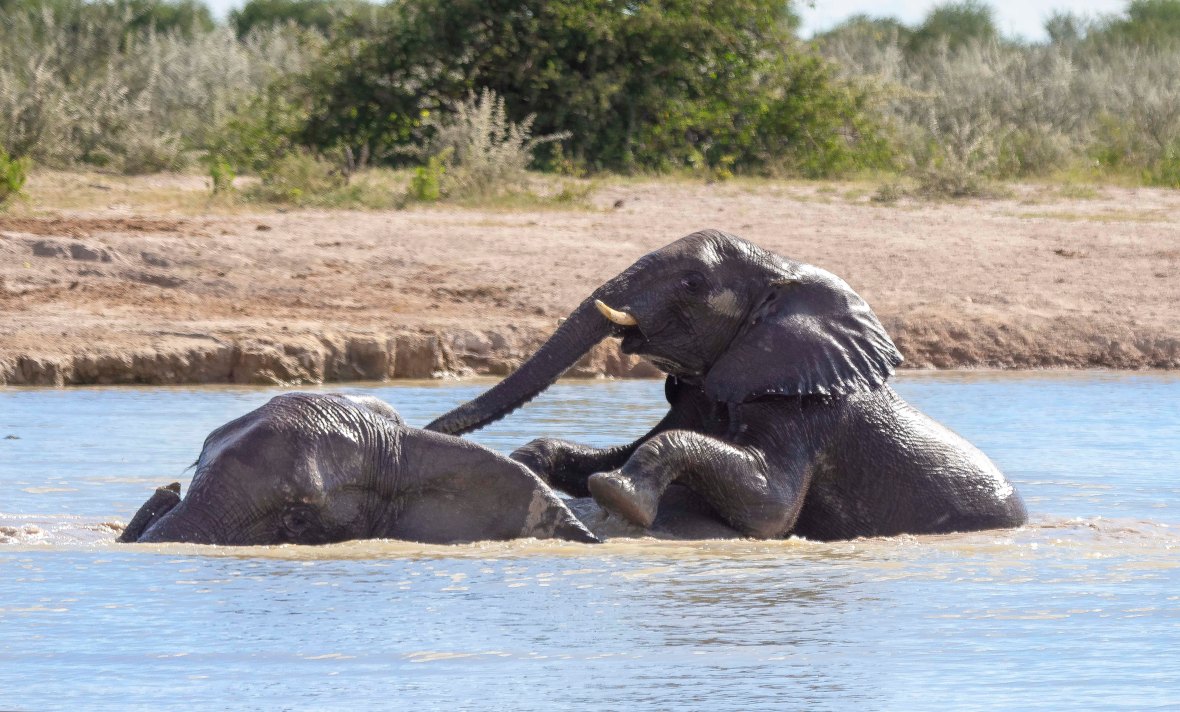 We stopped at Baines Baobabs on our way out of the park. The island itself was dry but everything around it was flooded. We had to cross a soggy pan to make the final stretch to the island. I was so grateful we got to see it and even better we had the whole island to ourselves! It was so empty that we even managed to get some drone footage (which is illegal). Would have been so awesome to camp there! We were so enthralled with the baobabs we spent a bit too much time and ended up leaving the Nxai Pan gate just at sunset. 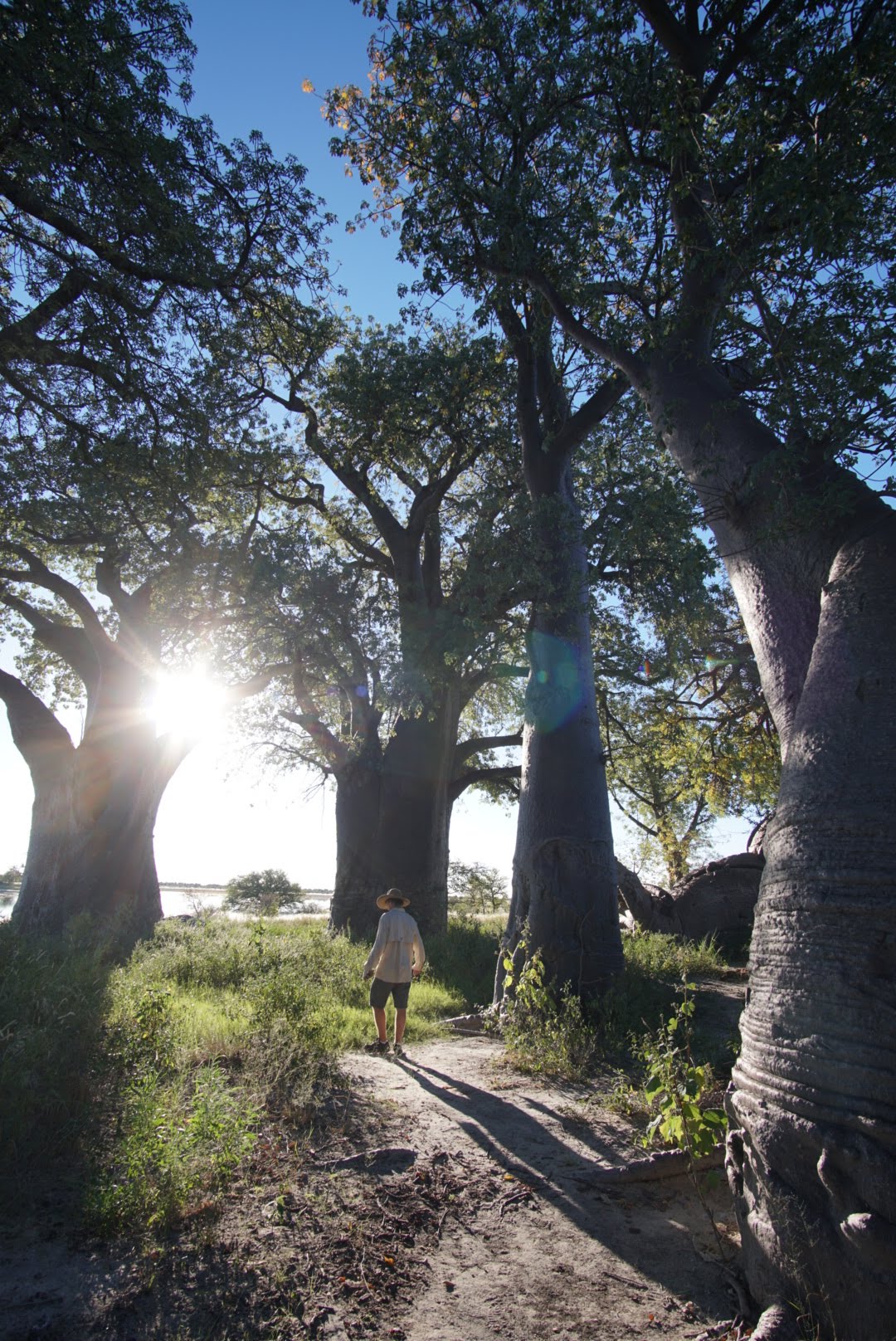 walking among the giants 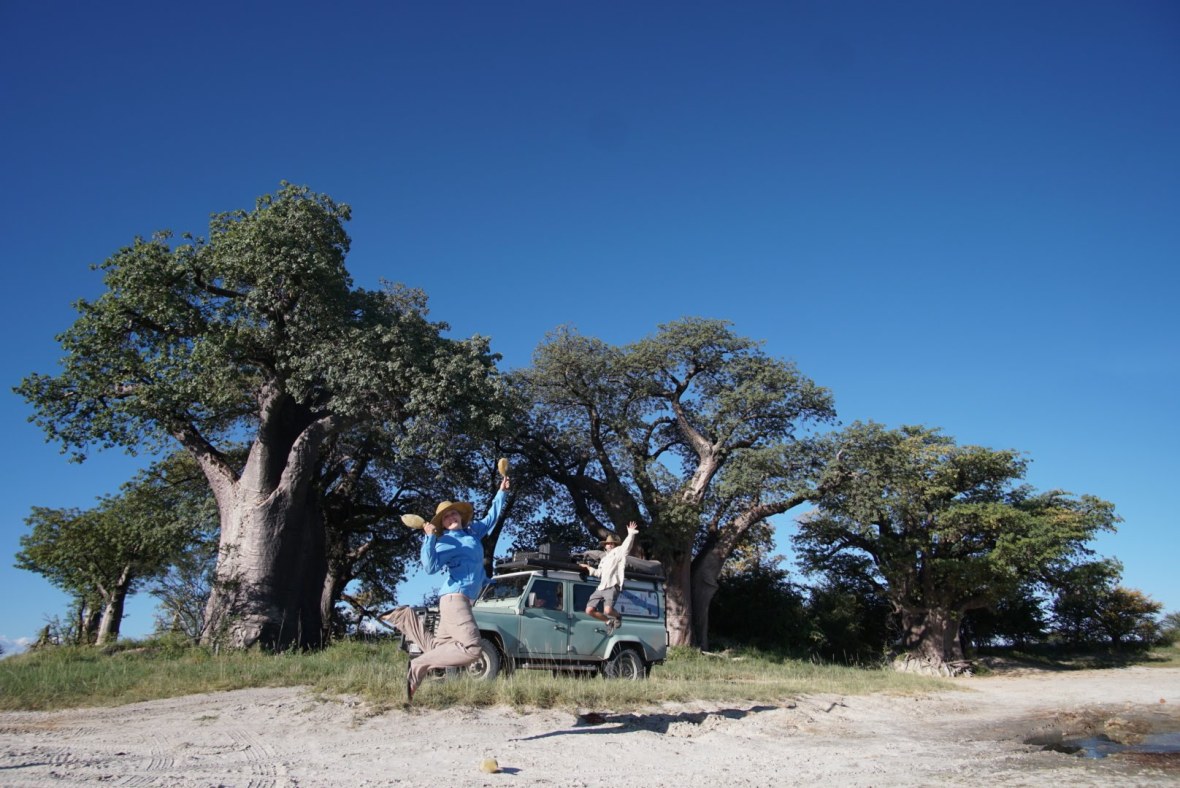 did you know that baobab fruit makes a great maraca?

The road to Maun is severely potholed and filled with cows and donkeys. Not something that should be done at night…but we didn’t have a choice! We were very cautious and thankfully made it without incident. We spent another night in Maun at Okavango River Lodge – this time camping. We liked this place because of their functional wifi and the large open deck with a great view of the Okavango River. However, camping was not that fun! It was sooo cold that night and really miserable because we stayed up so late trying to get caught up on work after being off the grid for a week. I had a ton of emails and other business to take care of. It has been really stressful trying to work while traveling. I wish I could just have taken a real break, but there really isn’t anyone else to take over my work in Botswana so even without a salary, I just couldn’t abandon the clinic.

In the morning we somehow managed to get the car fixed and get all our supplies stocked by 1pm. I went to the grocery store while Garrett worked on the car. We had hoped to leave by noon but of course things never quite work out as planned. Thankfully we left in time to get to Moremi Game Reserve before the gate closed to start the next part of our adventure in the Delta! 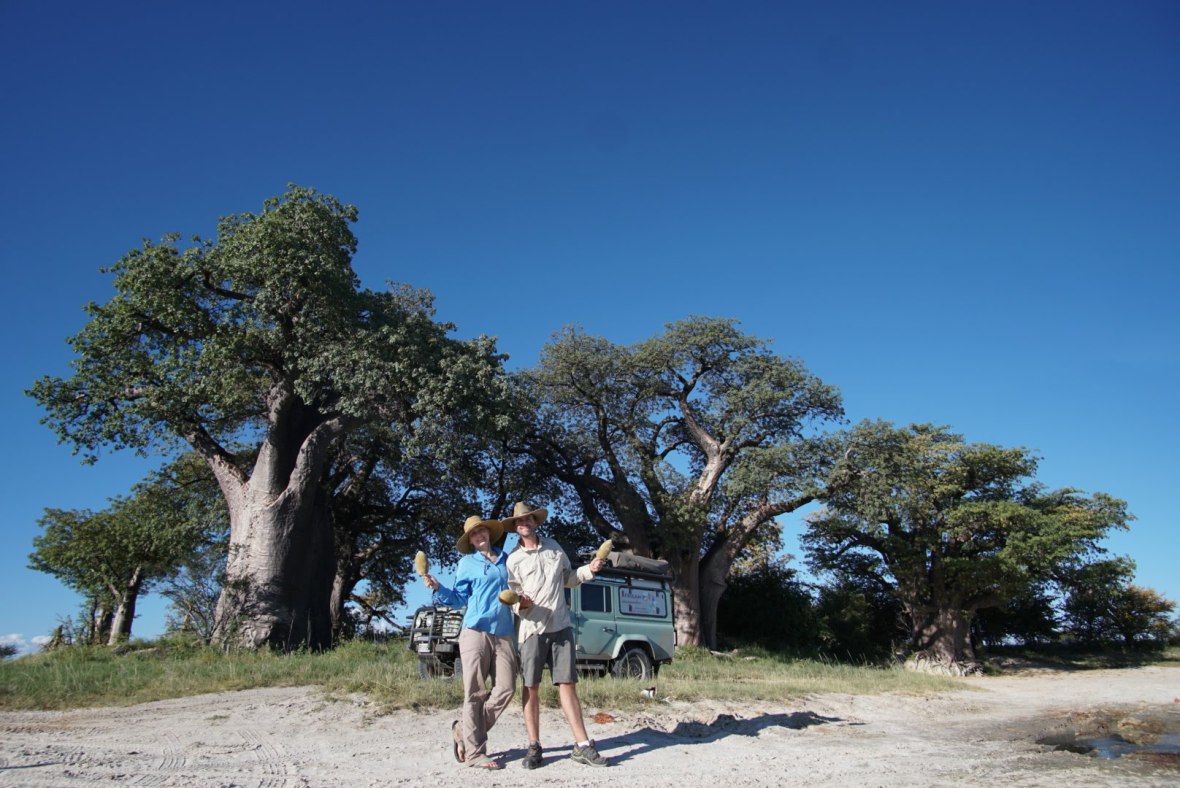