After leaving Mana Pools our plan had been to cut across the country and take the rough northern “telephone road” to Hwange. Although we read many trip report stating that this road was in “okay” shape, everyone we met while in Zim advised against to “avoid it at all costs!” After all the trouble we had in Mana Pools, we decided to take the long way on the well maintained tar road which takes you across the whole country. It was a good decision!

On the way south we noticed the car was making funny noises. It sounded like a sputtering pop. We decided it was best to cut our route for the day short and stop for the night. The only campsite we could find within 200 km was at Chinhoyi Caves. We had heard a little about the caves but had not planned to stop there. Even when we pulled into the campsite we still thought about skipping the caves because we were pretty tired. But its not in our nature to skip anything so pushed ourselves to hike up and down a ton of stairs to see the caves. Thank goodness because they were super impressive! I am not a huge fan of caves in general (because I think they all sort of look the same).  However, these caves were special because they had an incredibly crystal clear turquoise lagoon flowing through them. It felt like such a hidden treasure – so glad we ended up here for the night! The campsite was basic but I liked that it had little bungalows next to the sites and picnic tables. Also hot showers! 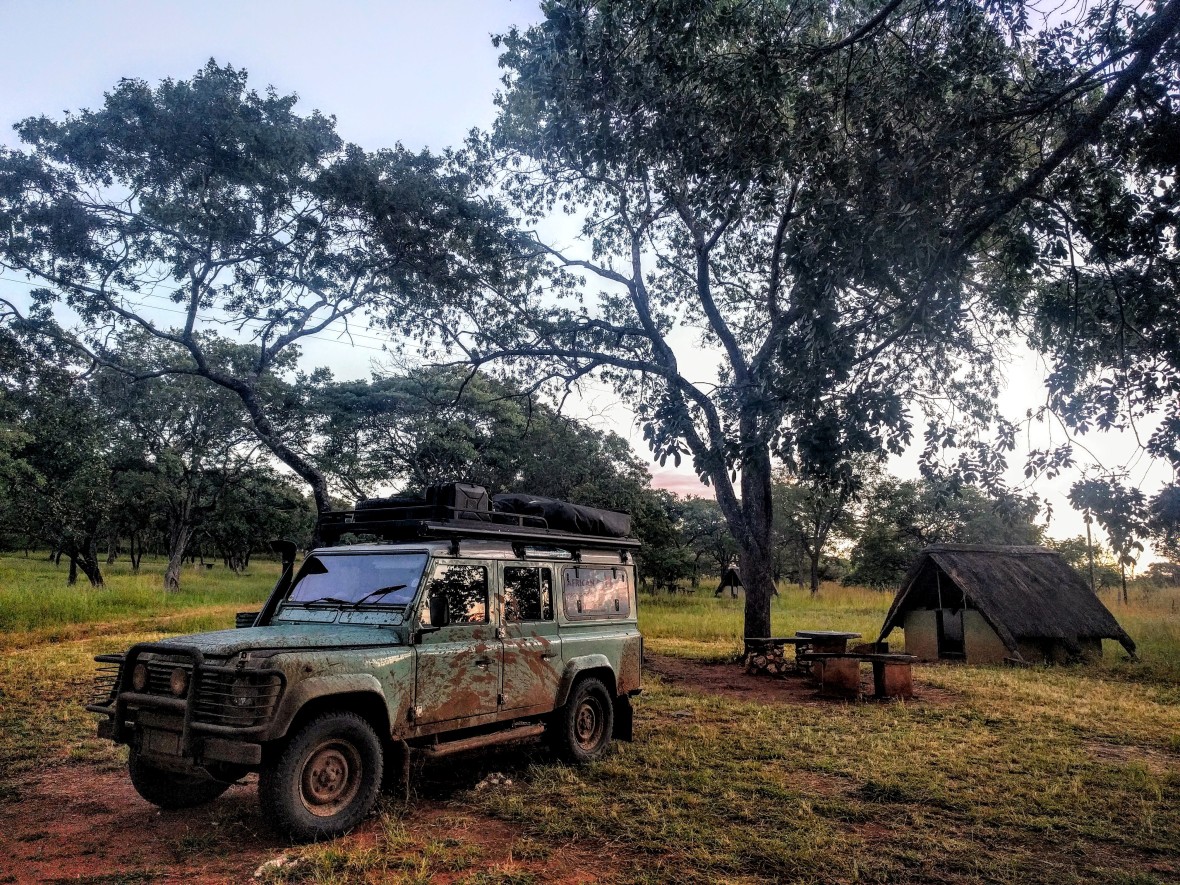 We were planning to bypass Harare and drive straight to Bulawayo to get the car checked out but the popping sound was getting much worse so we redirected straight to Harare the following morning. 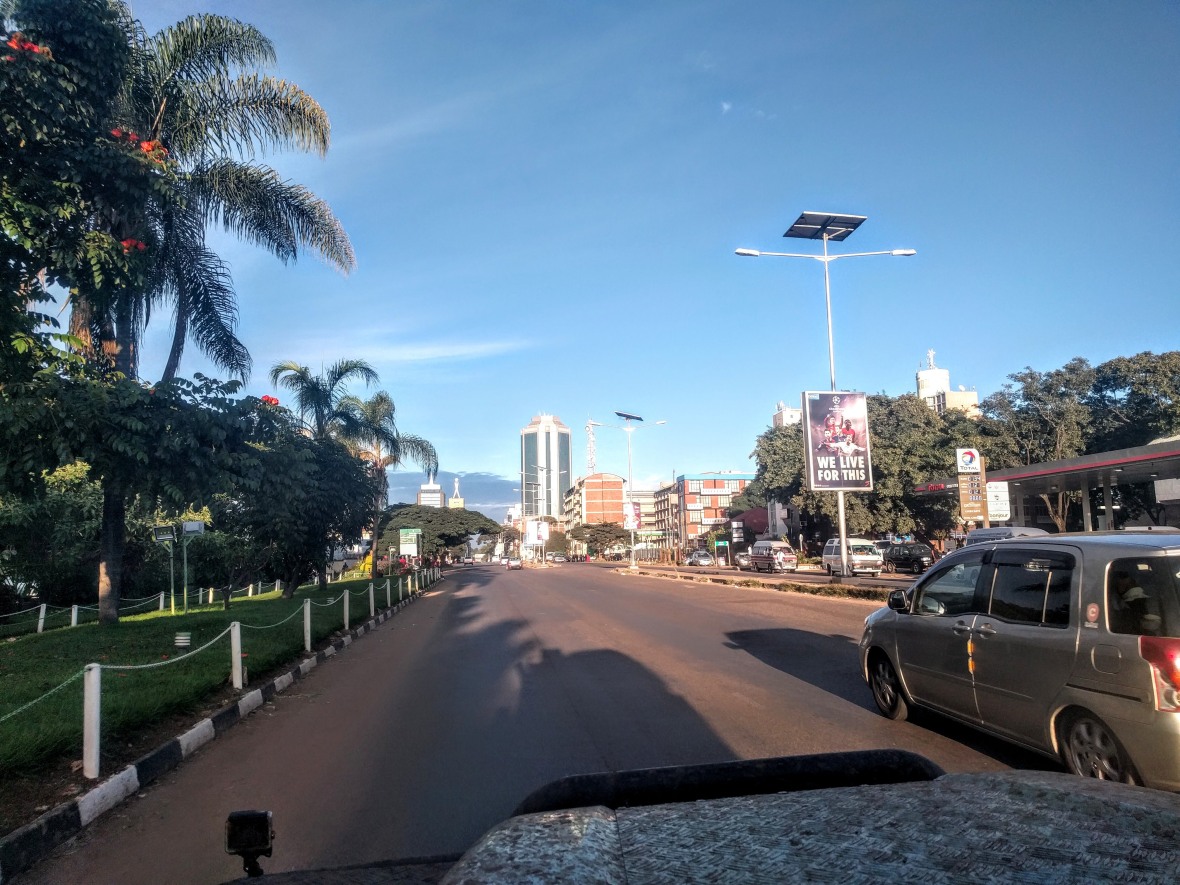 We had no contacts or leads for a mechanic in Harare. I had to wait until I got some cell service closer to the city limits to do some searching on my phone. I googled “land rover parts store” because that would be our best chance of finding someone who knew a good LR mechanic. We found one shop and tried calling but couldn’t get anyone to pick up. With no other choices we just drove to the address hoping for the best.  It was a bit tricky to find but thankfully when we pulled in we found there was a mechanic onsite who could help us.

He took a look at the car and figured out what needed to be fixed. It was the bushings that were making the disconcerting noises. We also needed new shocks and a few other fixes. He gave us a quote that was pretty ridiculous and he also demanded USD in cash. We pushed back and tried to get the price down but were only partially successful. It was a bad position to be in because it wasn’t like we had that much choice and we needed it fixed that day. So we agreed on a price and they got started. 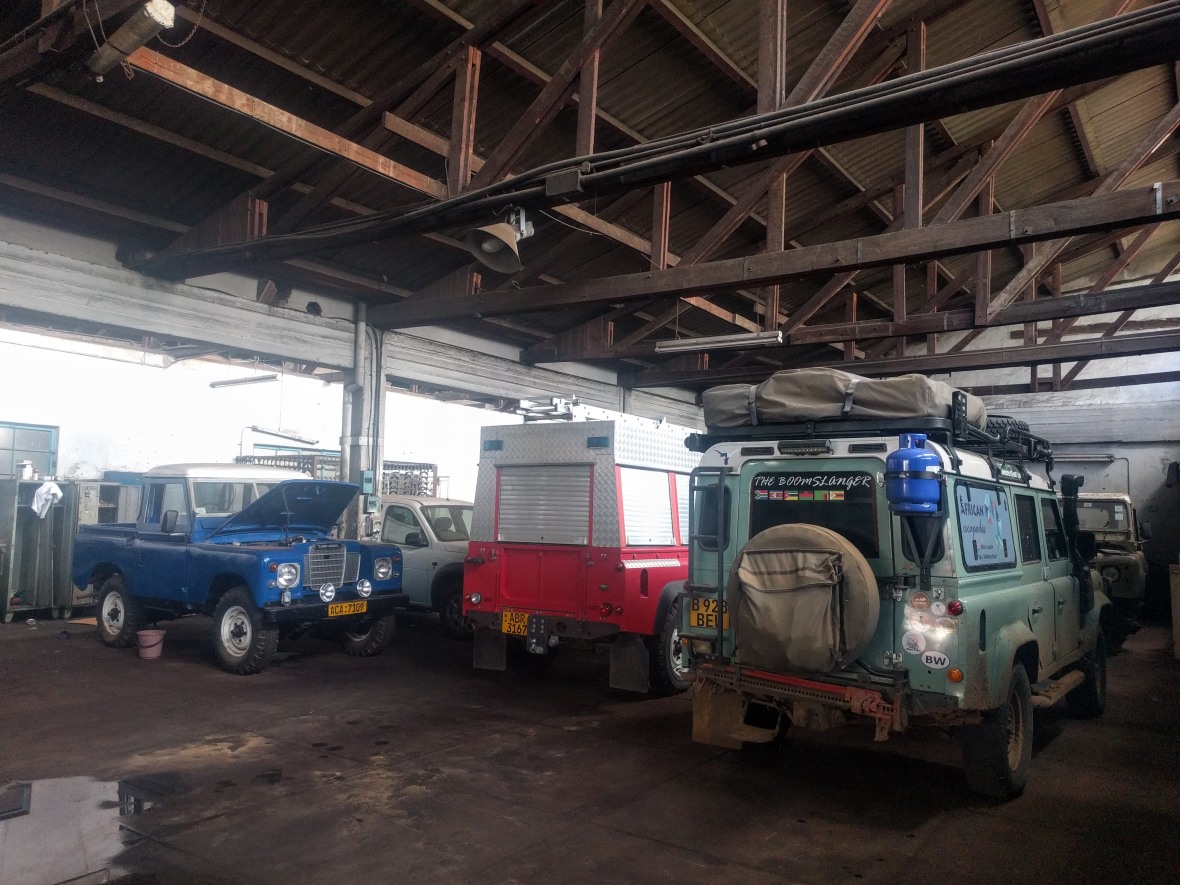 I have gotten used to waiting in strange places for the car to be repaired. All I really need is a place I can sit and use my computer because I always have plenty to work on. Of course getting wifi would be amazing – but is always an unrealistic dream in the areas we travel. I sat in the back office with some of the office ladies for about 6 hours. During that time, they told me all about their lives and the trials/tribulations of living in Zim. I couldn’t believe that one lady is basically supporting 15 people in her family by working 3 jobs. She is also paying for two of her kids to go to university internationally. I just can’t imagine how she could even earn enough money to get by. It just doesn’t make sense to me how one person in the family has to be responsible for everyone. The loyalty of families in Africa is incredible. Typically people who work give up to 95% of their salary back to their family members, many of which are sitting back in their villages doing nothing. The explanation I am often given is that they were lucky to have the opportunity to work so they have to share their blessings with their family members who were not lucky enough to get an education and a job. This is so bewilderingly different than the US mindset of “me first” and “my money is MY money.” It is common in the US to support parents when they get older but many people don’t even do that! 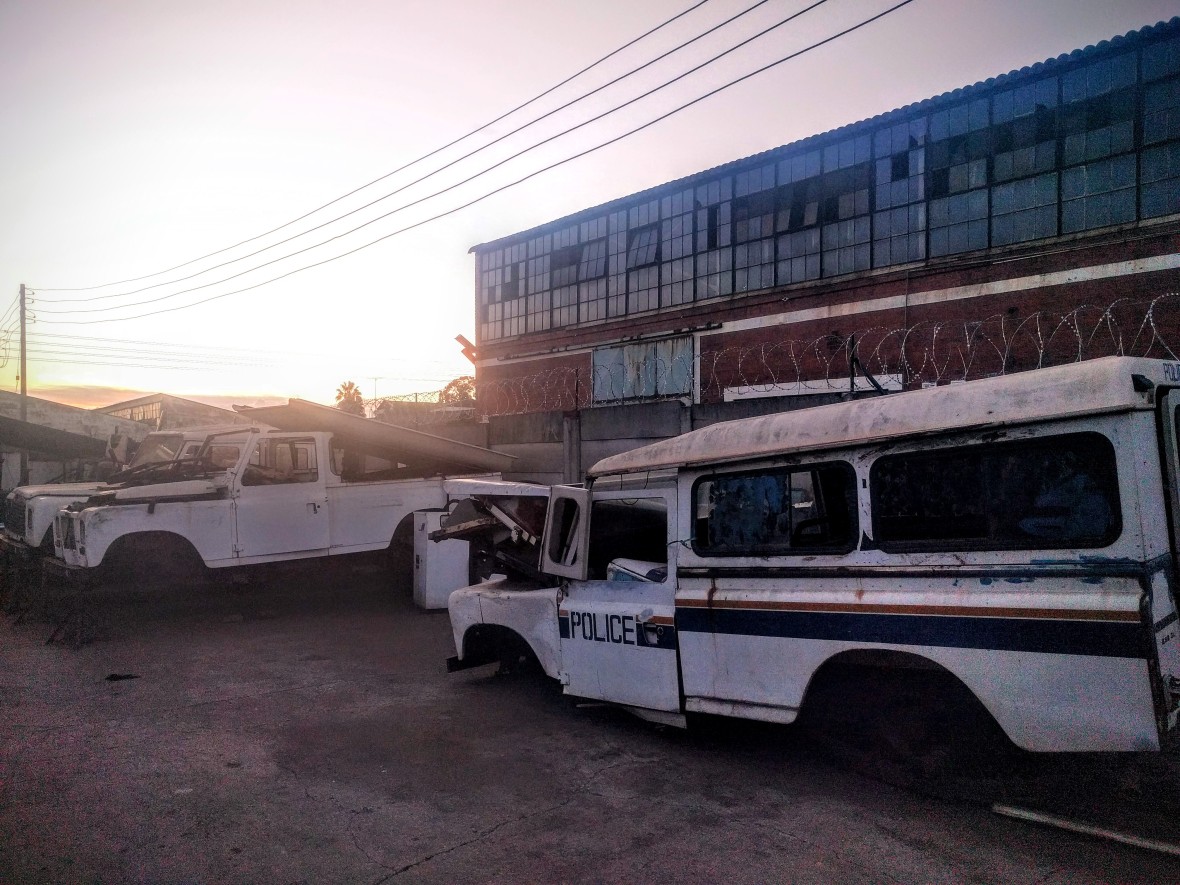 the sun setting at the shop

The mechanic finished with the care around 6pm. I had looked on booking.com to find a cheap place to stay that was close to the shop. The owner of the parts store, Maurice, found out where we were staying and immediately said that it was not a good idea to be going into that part of town after dark. He very generously offered for us stay at his home. I was really shocked – this kind of hospitality is not common in the US or in Botswana. People in Zim are really out of this world with their generosity. His house was on a lovely plot with a huge yard and attached guest room. We met his wife and a friend from Australia that was staying with them. 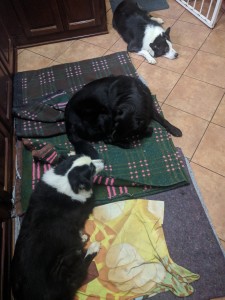 we loved getting to play with their sweet dogs!

I assumed we would just be shown our room and then go on about our business for the night. I was shocked when they asked us to join them on the back porch for drinks and snacks. Then his wife cooked us dinner and we talked until late into the night. Such kind people! So so different than what you would get in this situation in the US. Even in our previous hometown, I can’t even name 5 people who have invited us to their homes for a meal. Everyone just meets out at restaurants for meals. It is pretty rare for people to invite you over just to sit and talk and share a meal. My experiences in Africa have taught me how important it is to be generous and hospitable with your time. Taking the time to slow down, talk and reflect with people is an important part of life and one of the more enjoyable parts of living in Africa. I love hearing about different people’s experiences of growing up in Africa. Their childhoods sound so wonderful – like a dream to me. Getting to run wild in the bush, playing with animals and making  their own rules.

I am also fascinated with hearing about how Zimbabweans have coped through their tumultuous political situations. You just cannot believe what people have had to endure and yet they forge onward coming up with back up plan after back up plan to make their livelihood. They are the most resilient group of people I have encountered. Against all odds they continue to find ways to support their families. Zimbabwe is not an easy place to live but it is their home and instead of fleeing, so many have stayed and found ways to make it work. Maurice has been a hunting guide then switched to car parts but also sells many small things on the side to make money – like close pins and plates. They come up with whatever they can to scrape by – mainly to allow them to send their kids to school. 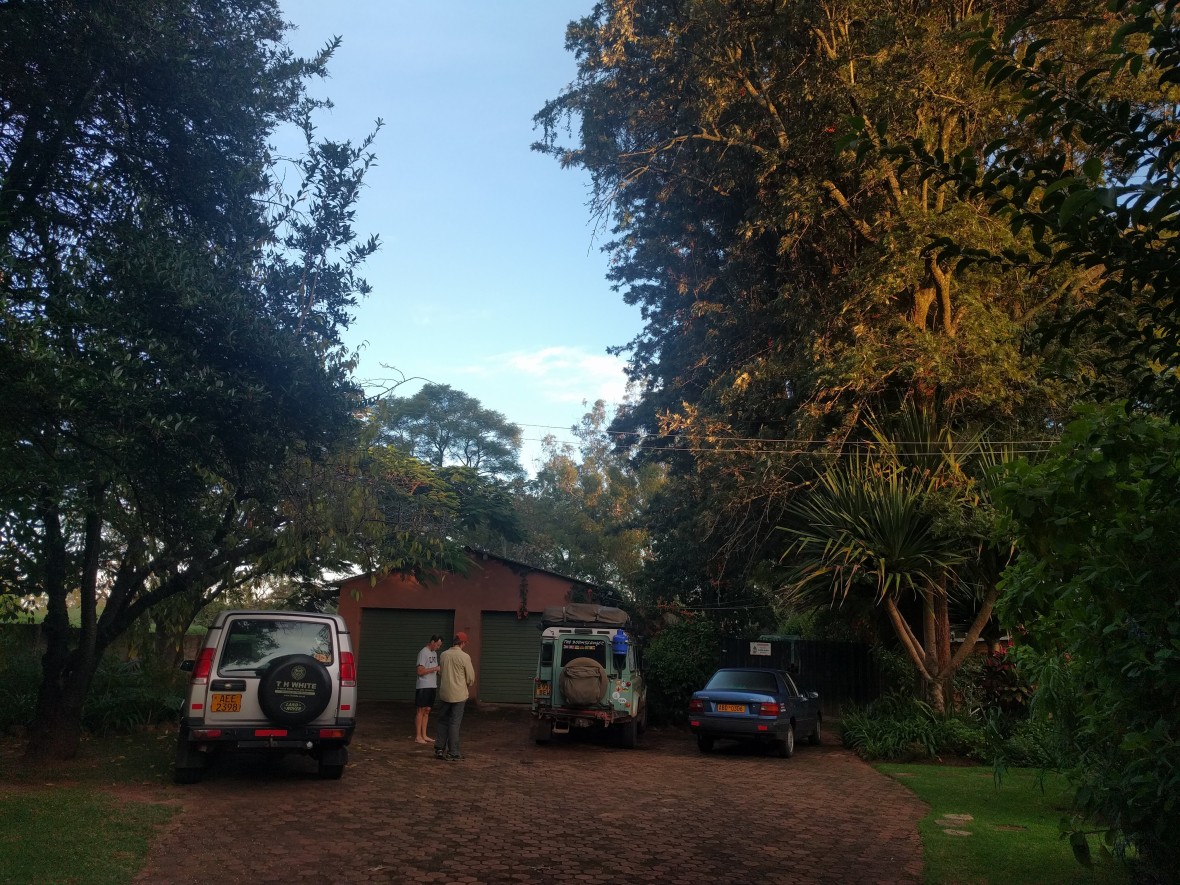 most people have huge plots with lush green yards in Zim

After giving us a place to sleep and serving us dinner and breakfast, Maurice wouldn’t accept any money. I am still amazed at their kindness. We have stayed in touch the rest of the trip for advice and mainly car help. We now consider Maurice and his family friends. I hope we will be able to visit them in the future. 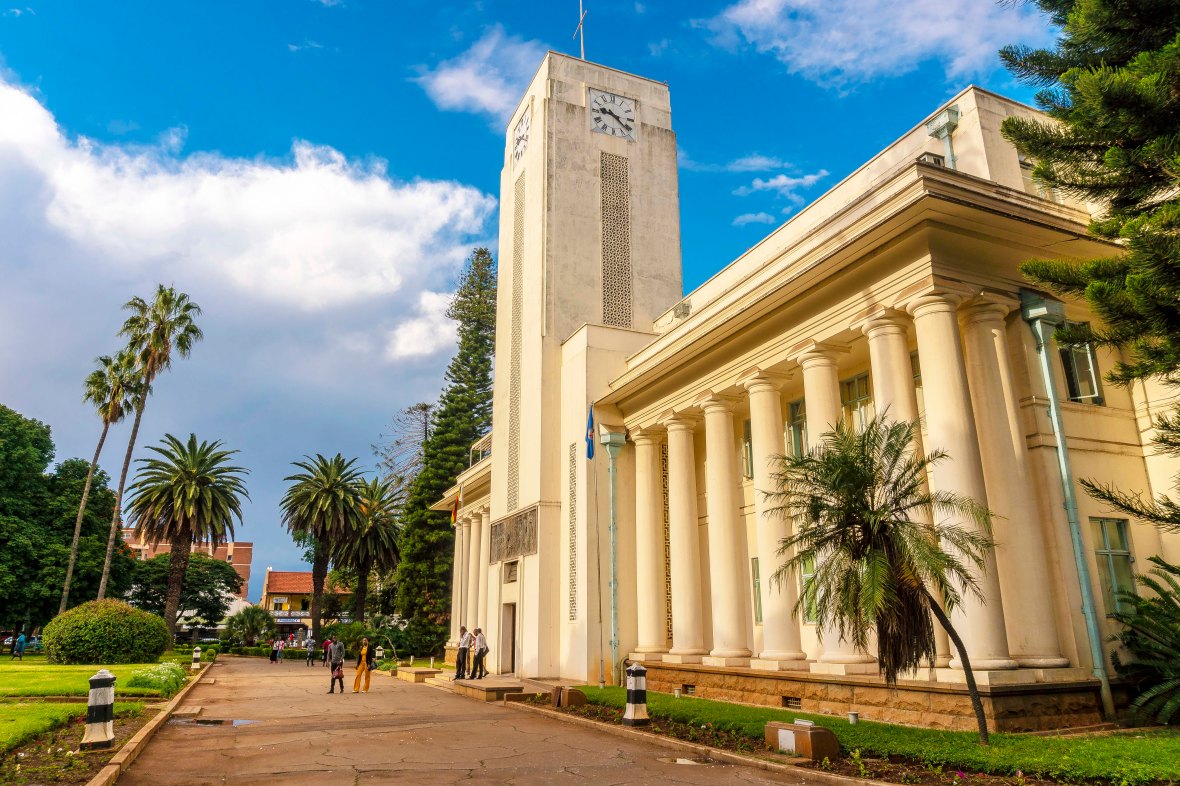 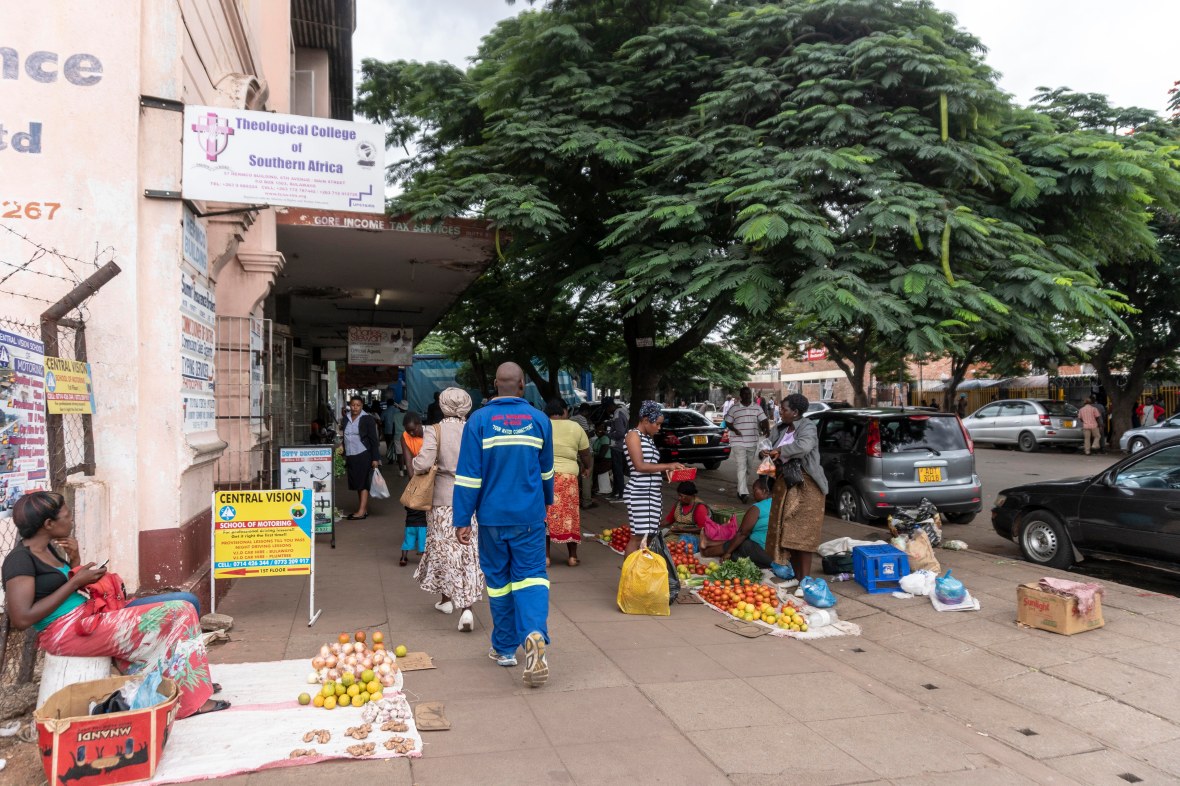 After leaving Harare, we made our way to Bulawayo. This is the other big city in Zim. I have heard a lot about it so wanted to see for myself. It is an interesting place. Bulawayo is a small town that makes you feel like you are in a time warp. You can tell it was a very up and coming cosmopolitan city in the 80s but then everything just halted when the economy crashed. The buildings look fairly new but the style of everything is so outdated. There are huge boulevards through the city making it look very grand. But the streets are filled with people in various states of poverty. There aren’t even many tourist shops. 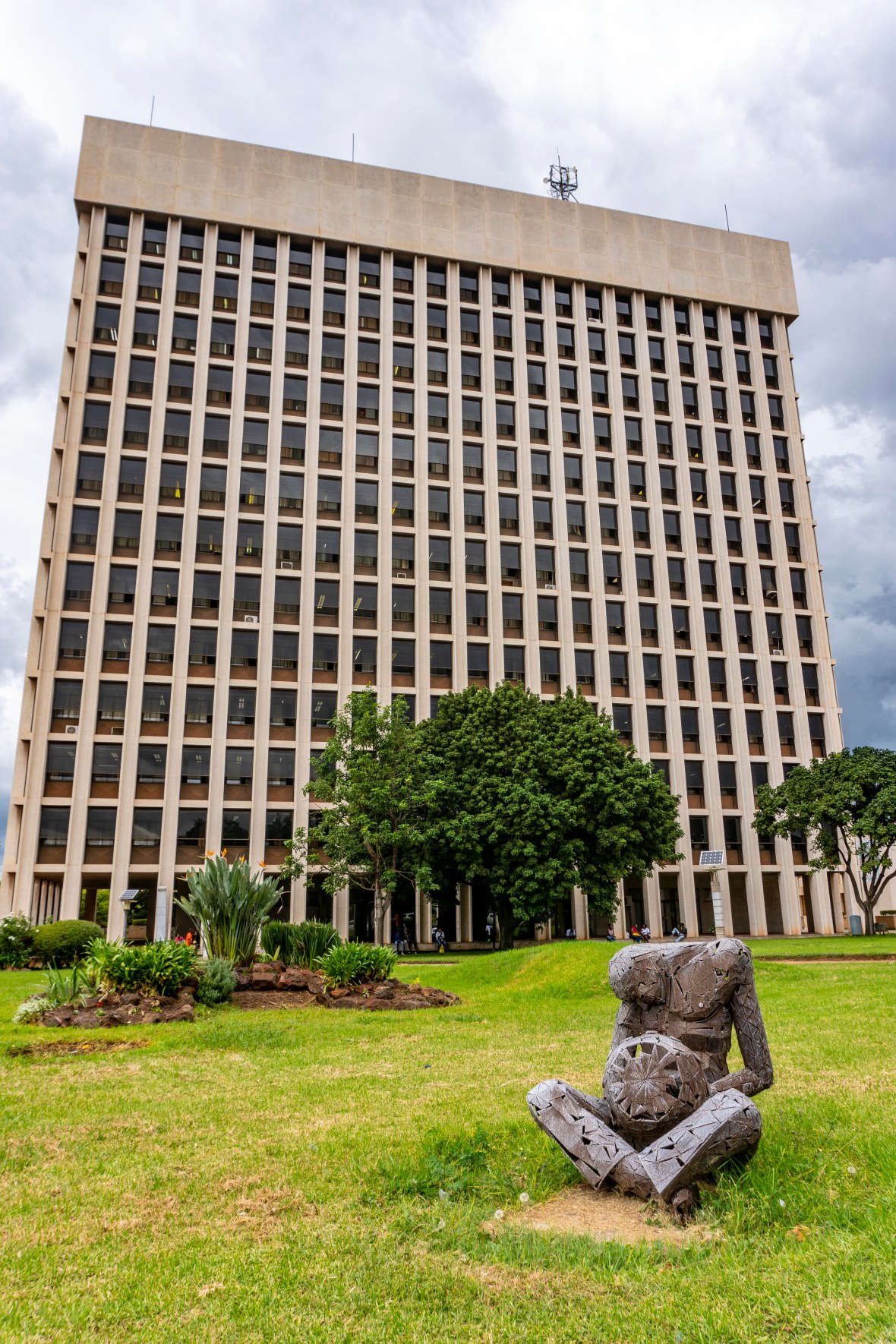 many buildings have a communist era feel 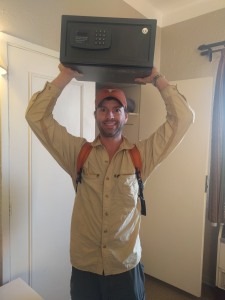 the most “unsafe” safe

We stayed at the Rainbow Inn which is a huge yellow building in the center of town. It was $60 which is a bit pricey but all accommodations in Zim are quite expensive for pretty low quality. This place had very good customer service, a welcome drink, secure parking, wifi (slightly functional) and a good location in the center of town. The funniest thing was that the safe in the room was not bolted down so someone could just run off with the whole thing! 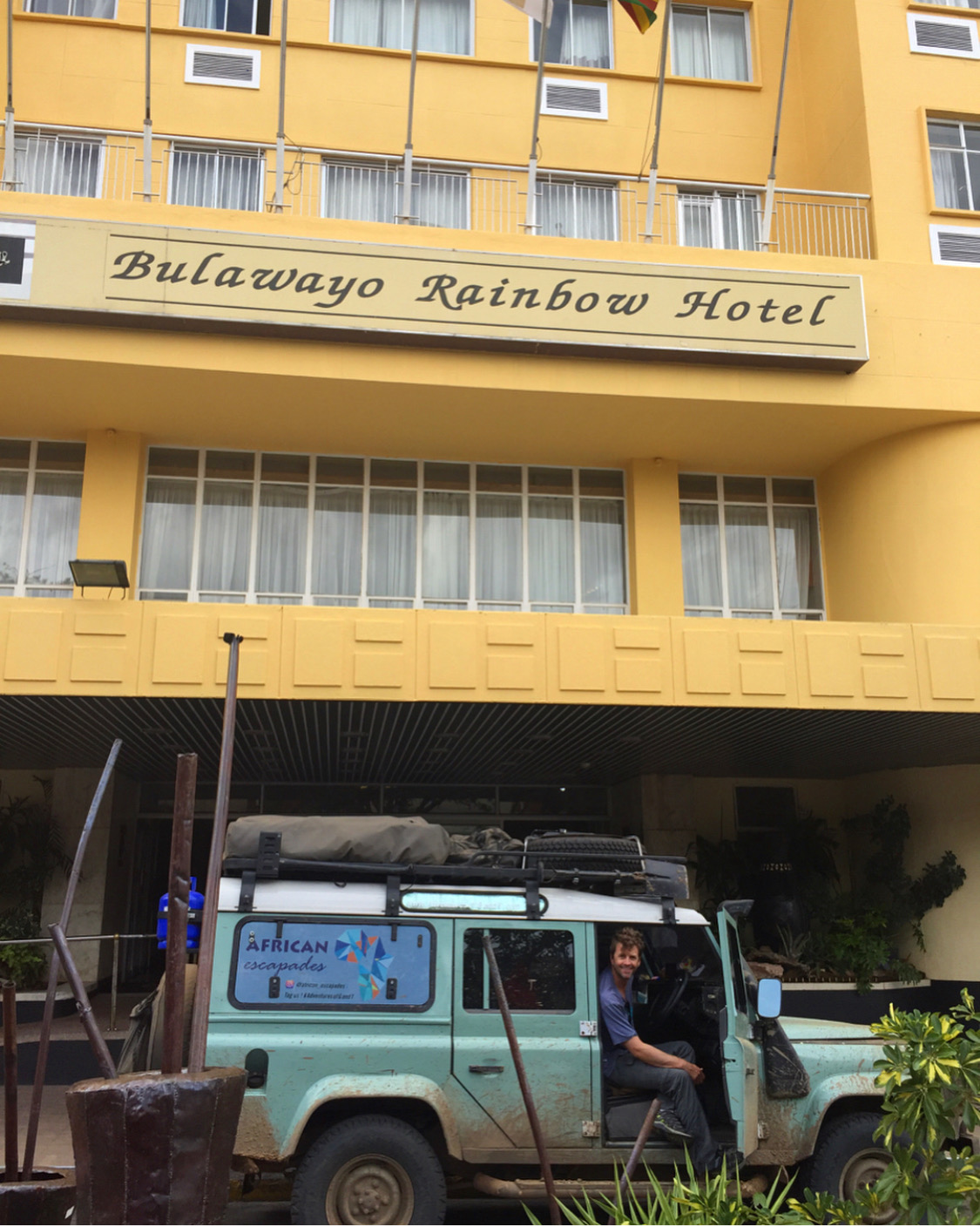 arriving to the Rainbow Hotel

We only had an afternoon to walk around. I was hoping to find a large craft market but only found some pretty sad looking small craft shops that were overpriced. We also went in search of a fabric shop and after 30 minutes of walking found a few. However, there was not much local fabric to be found. I got a few items but was overall disappointed. I really wanted to find fabric with Robert Mugabe’s face on it! 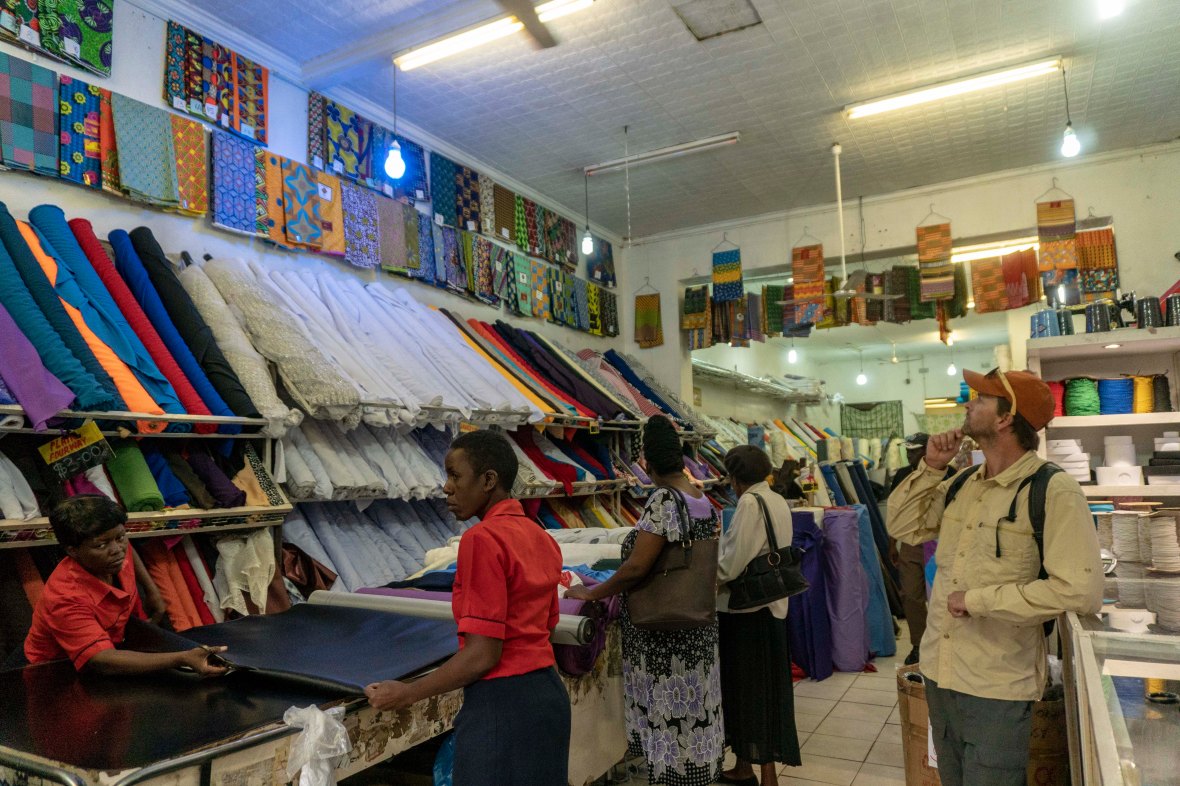 While walking we happened to see a few paintings in a window. There was a watercolor of wild dogs which caught my eye. We walked around and tried to enter the building to take a closer look. At first the front desk told us we could not enter. On a bit further investigation we found that it was actually an art show and we were just trying to enter from the wrong door. 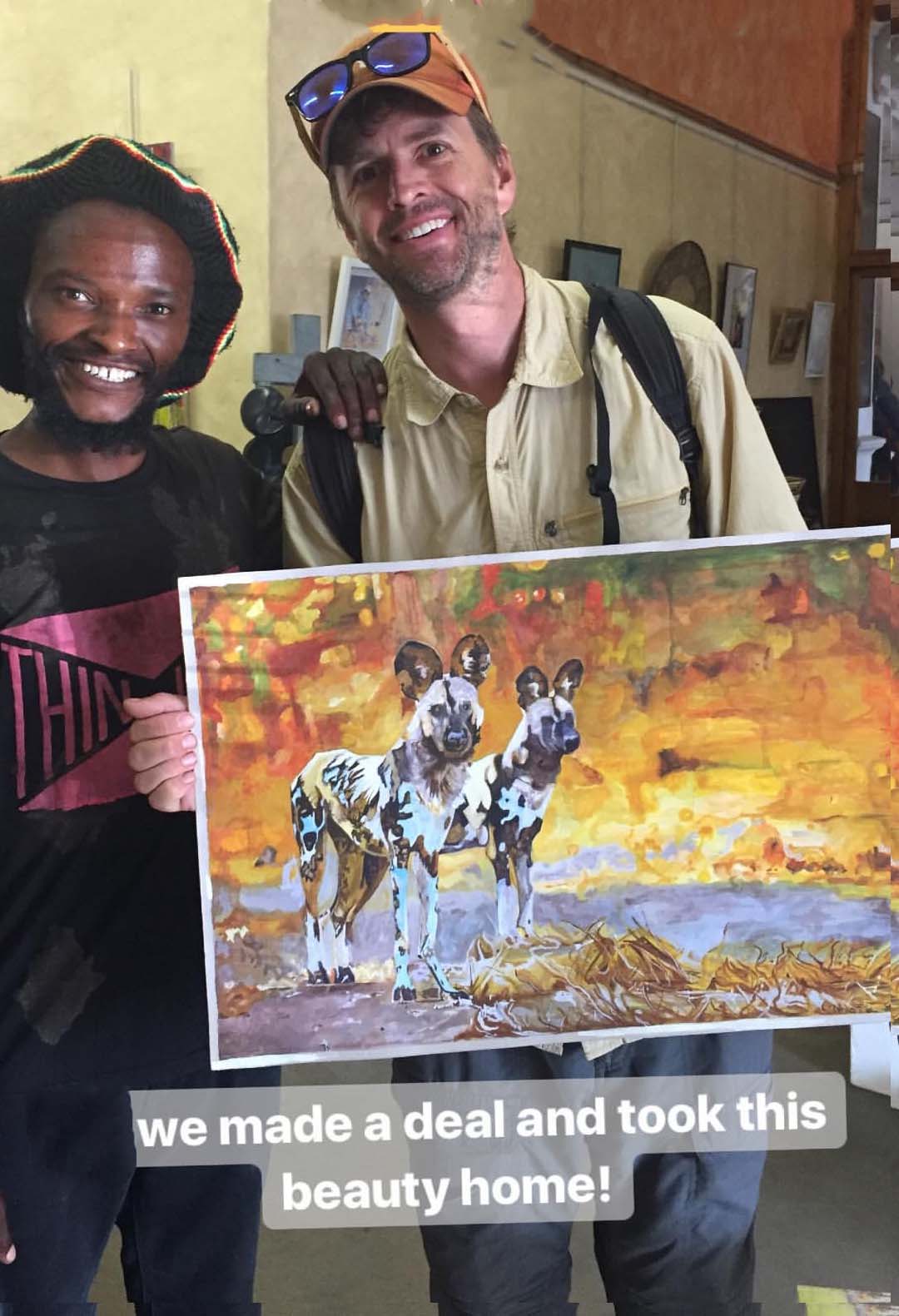 We met the teacher who runs the art school for local youth. The teacher took us to the painting we were interested in but there was a label saying “not for sale”. How disappointing. There were other good pieces but I had become obsessed with this wild dog watercolor. Luckily, pretty much anything in Zim is for sale for a price. We just had to do some more negotiating. We offered $120 for the piece and it was ours! I could not be more excited. I will always cherish this painting of my favorite african animal! We have not bought many things on the trip so I was happy to have found something really special. 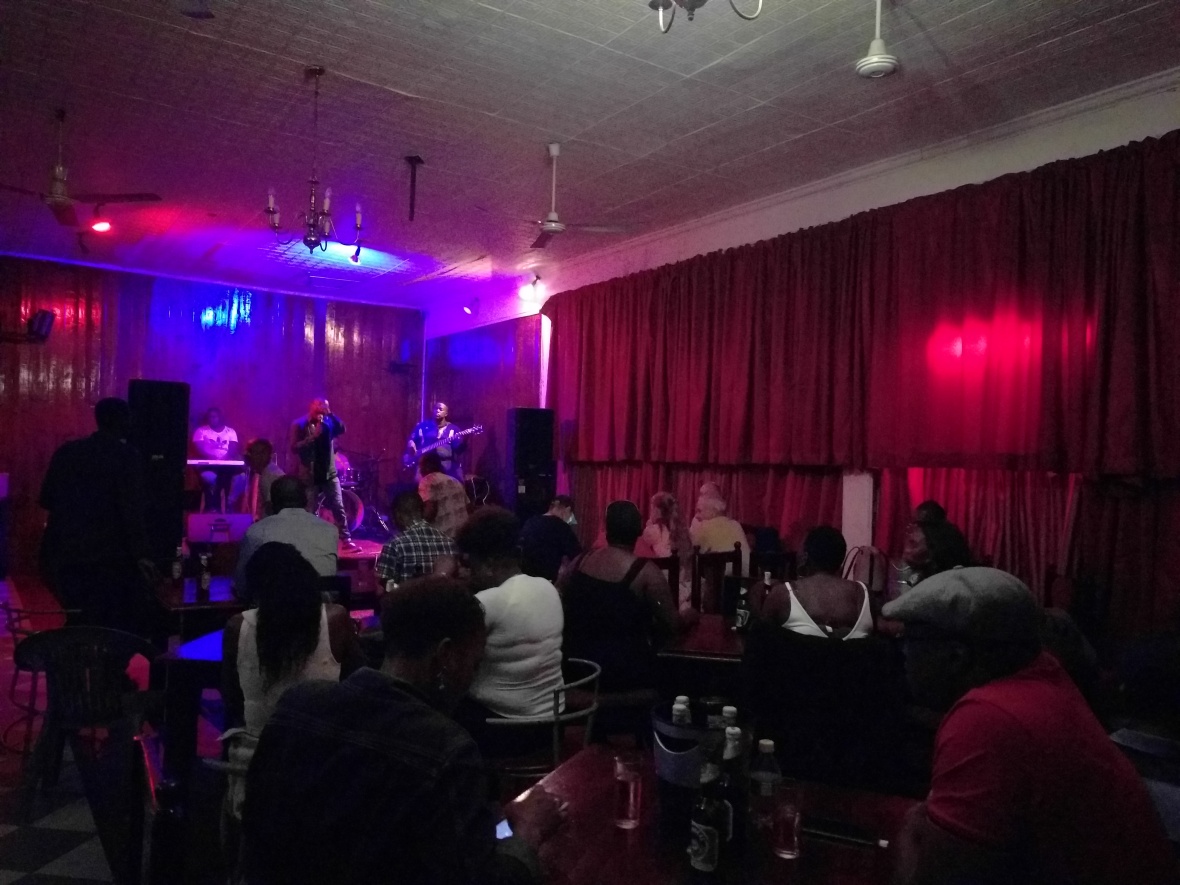 That night we went to a local jazz club for dinner. We got a large steak and chips for ~$7 for both of us and could enjoy the band while eating. The place was packed and there was a mix of locals in the audience.  Despite being exhausted from an 8 hour day of driving, we always try to take advantage of  local experiences to get a feel for the culture. It was really good to see locals out having fun. Life is hard in Zim but people are kind, happy and take the time to enjoy what they can in life. It is one of my favorite countries for these reasons. It is also incredibly beautiful! 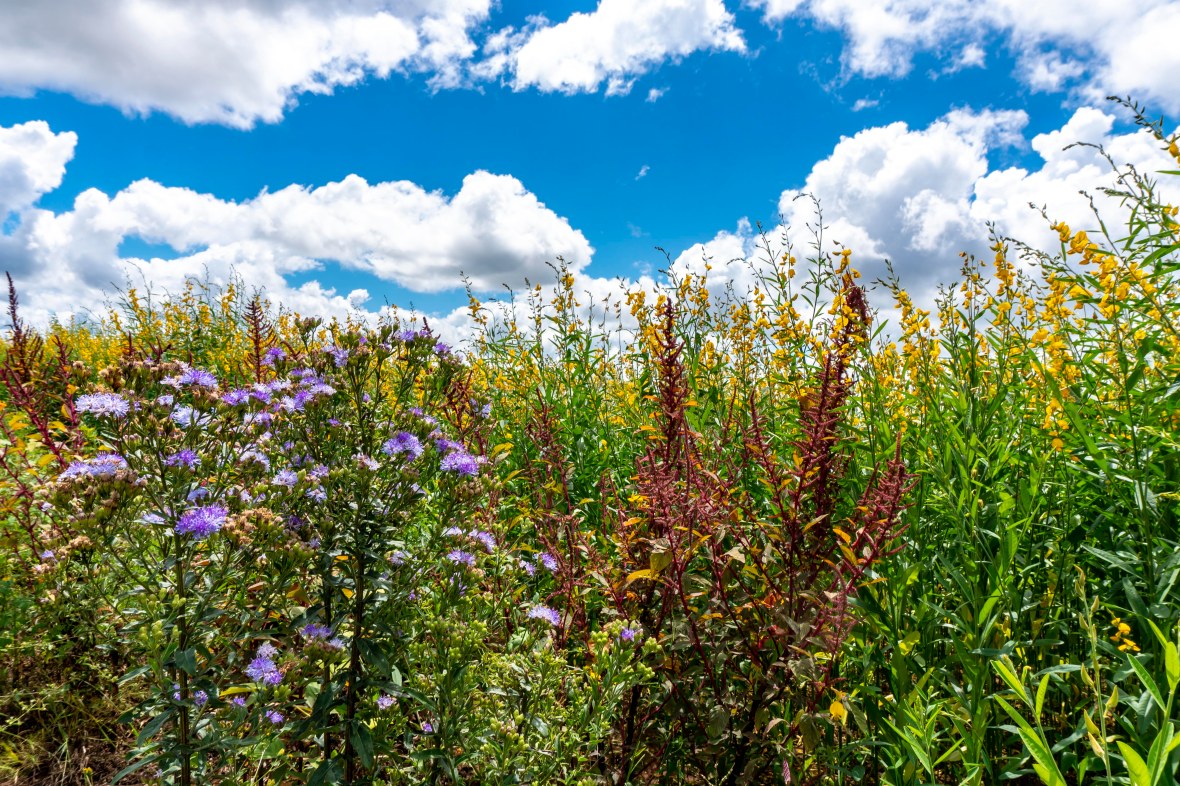 endless fields of flowers fill up the countryside of central Zim