Its no secret, I’m obsessed with diving. When I knew I would be back in Tanzania this past November – I immediately started scheming about a way to get back out to the islands to do more diving. I’ve had my eye on Mafia Island for a while and was pretty pumped to see what the diving was like. Mafia is a smaller island off the southern coast of Tanzania – closer to the border of Mozambique.

There is one small airport in Kilondoni which is the larger of two main cities on the island. Getting there is a short 30 minute flight from Dar. There are usually only 2 flight a day because the island is much less visited than its famous neighbor Zanzibar which has flights every 30 minutes! You land on a tiny airstrip to a one terminal airport. I was immediately greeted by a friendly tuk tuk driver who spoke English and offered me a ride to my hotel – super easy. He of course tried to overcharge me (although only by about $2). I always do my homework and check on the standard rates before arriving so I know what I should be negotiating for transport prices. It took about 25 minutes by tuk tuk to get across the island to Utende and the Mafia Island Marine Park.

I booked to stay at Big Blu Divers which is inside the marine park. I chose to stay at this resort because they are really serious about diving, conservation and supporting the local community. Tanzania’s marine life is heavily threatened due to the fishing industry. They have made some progress by creating 3 marine parks and 15 marine reserves to try to protect key marine ecosystems. However, these protectorate areas mean nothing if fishing laws are not being enforced by constant surveillance and patrols. The government gives these marine officers a tiny shoestring budget to monitor these huge pieces of land. Without the means to patrol vast areas of land and water everyday – there is no way to stop locals from continuing harmful fishing practices.

Big Blu Dive Center was noticing huge declines in fish populations and damage to the Mafia Marine Park. They got sick of seeing less and less marine life and decided to do something about it. They began directly funding a boat and a captain to patrol the Marine park daily. Just the simple change of having some form of constant surveillance has made a big impact. Illegal fishing has almost disappeared from the area and fish populations have started to noticeably rebound.

There are multiple other dive centers and resorts in the same area within the Park. Big Blu has tried to convince the resorts that everyone should chip in and help support these marine patrols. I was shocked to find that all other resorts have refused to contribute! They are directly benefitting from the conservation of the area’s wildlife which is the only thing that brings in tourists. I cannot believe how greedy and short-sighted they could be. I hope they will come around in the next few years to help support conservation, because it is a huge expense for Big Blu and you never know how long they will be able to shoulder the cost alone.

To stay inside the park you have to pay $20 a day. Mafia Island Marine Reserve is the only marine park in Tanzania that has a tourist industry and a well maintained gate to be able to charge a fee. That means that the income from this nominal fee has to get spread across all the marine parks and reserves in Tanzania! One of the managers was telling me stories about the great lengths visiting tourist go to in order avoid having to pay the park fee. Trying to sneak in at night, coming in by back roads, sneaking past the gate by foot….come on! What the heck is wrong with people! What makes you think that you should be able to come and enjoy the beauty of a foreign country and not be expected to contribute anything to its up-keep or the local community. It is so selfish and disappointing. If you don’t have the money to pay a park fee then you do not deserve to enjoy the park! 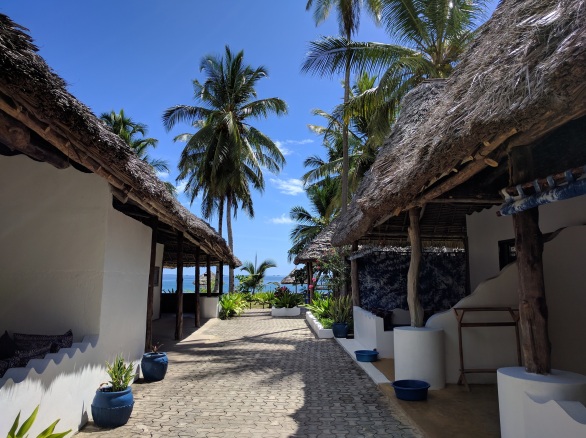 I thought Big Blu was a fantastic place to stay and dive. You can choose between staying in a tent (for those on a tight budget) or you can stay in nicer bungalows which are on the pricier side. I chose to stay in a bungalow and was pleased with my choice, especially because I was only there for 2 nights. 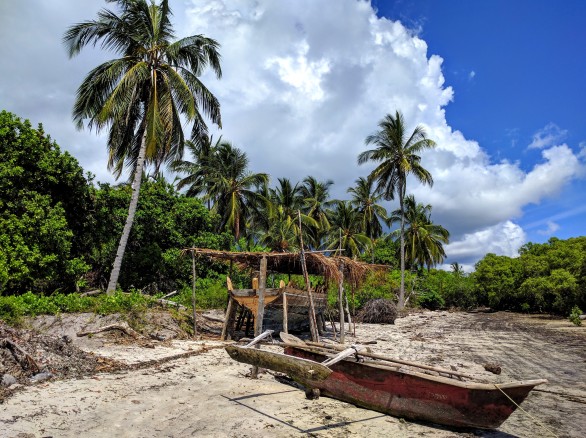 The hotel staff were super friendly and helpful. The dive guides were also very chill and also well trained. I did three dives. The first two dives were in the outer lagoon – Jina Wall and Jina Reef. I liked Jina Wall the best – because I love beautiful wall dives. The visibility was awesome – about 50ft. I was most amazed by the size of the stingrays – each one we saw was HUGE. About the size of a large dining table! There were lots of schooling fish, huge painted lobsters, mantis shrimp, turtles, nudibranches, etc.

The second dive was more of a drift dive over a very lively and beautiful reef. We saw less because of the speed of the current, but it was still very enjoyable. The last dive was inside the lagoon and called Msibiji. I loved this area because it is a hotspot for nudibranches and flatworms. I saw over 20 in one dive and at least 5 types that I had never seen before. Really incredible bright neon blue, green and orange ones with ornate patterns and crowns. I even saw some swimming freely. It was awesome! Another highlight was seeing a grunter with its wings spread walking along the ocean floor.

One of the most famous things to do in Mafia is the snorkel with whale sharks. I chose to do more dives instead of doing this activity because I’ve seen whale sharks before and its been pretty hit or miss lately whether you find them. They also have a turtle conservation center on the island run by Sea Sense. From around June – August the turtles hatch and you can hike across the island to go visit them. 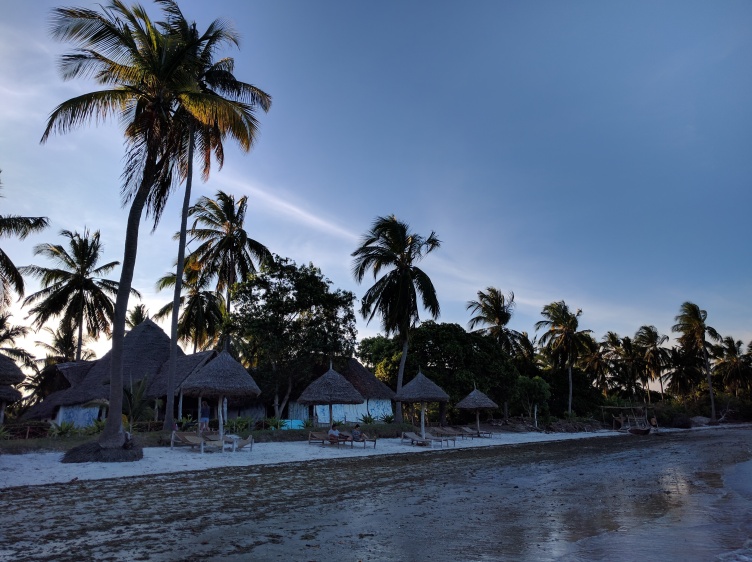 There are also multiple spots to snorkel. Plenty of things to do even if you aren’t a diver. Mafia is a very chill island with a low density of tourists. If you are looking for a great relaxing dive spot in east Africa, I would highly recommend it!

More pics and videos from Mafia!

Fantastical light patterns over Sand Beach at Acadia
Fall in Acadia #fall #travel #nationalparksusa #maine
Favorite wildlife experience ever - crawling on our hands and knees up to a pack of wild dogs!! We found the pack in Mana (where you are allowed to self drive/walk), we crawled up so they wouldn’t get scared off/disturbed. As we approached a warthog made a bad decision to walk by and the pack took off after him and flew by us!!!! Thrilling!! This is not something to do if you don’t have significant wildlife experience- we know wild dogs don’t hang out in areas where other large predators are and there have literally never been any reported attacks between the dogs and humans. Still always must proceed with respect and caution around all wildlife! @glister22 #zimbabwe #manapools #wilddogs
An ode to Skippy! We found this rum in Zim named after our doggie @skippylister who we miss very much when we travel. Too bad it tasted like petrol 🤪 @glister22
Our beautiful campsite on the banks of the Zambezi at Mucheni 2 . Nice shade, great views and a nearby pond for bird watching. But of course we had some stealthy baboons make a few raids 🙈 #zimbabwe #zimparks #manapools
Heading into Mana Pools in our Britz rental. We definitely missed having Boomie but were glad to cut out 2 days of driving
Gas lines in Zim are no joke! We were lucky to have some help from local friends or else we just wouldn’t have made it to Mana! Every petrol station we saw in every town had a line stretching for blocks! It took us a whole day to get supplies for our hilux rental since we decided not to drive Boomie to Zim
Typical village scenes from rural northern Botswana. Square or round thatch roofed huts, simple natural wood fences, lots of cattle, small tuck shops to get basic goods, central village water pumps, tiny one room health posts, and nearly all are connected to the electrical grid
Brought some nice new flare for Boomie from Peru! #llamalover #landrover #defender #landylover #overlanders #overlandafrica #landroverdefender
Most people think of Botswana as flat and dry - but driving across you will find areas of green lush hills and lots of kopjes jutting out (rocky cliffs) #botswana #camping #overlanding #overlandafrica #safariguide #safariadvice #africatravel #defender #landroverdefender #landylover
This was our second visit to the Kuru Arts Project in D’kar Botswana which is one of my favorite community development programs. The program supports local San Bushman to use art as an expressive outlet for their cultural traditions and a source of much needed income. I am obsessed with the genuinely unique colorful style of the art #art #localculture #tradition #bushmen #botswana
CAUGHT on camera! A very clever honey badger knows how to take down a latched trash can. He knocked it over so that gravity would be pulling on the latch, then he dug out underneath so that the latch would drop down into the hole and he could climb in! He visited us every night while in Savuti camp 7 #honeybadgerdontcare #honeybadger #gamecamera #botswana #camping #safari #overlanding4x4 #overlandafrica #travelgram
Last year water was up to the bonnet in Moremi and Khwai....this year river crossings were a breeze and allowed us to explore more areas. But we still always check the depth just to be sure!
Many people love Khwai northgate camp so we decided to give it a try but we definitely prefer Khwai community camp! The location of the campsites is lovely but they are really packed in together which made things quite noisy #botswana #camping #overlanding #overlandafrica #safariguide #safariadvice
If you want to see a wet delta this year, you’ll have to go far west. Vumbura Plains is an absolutely stunning camp set on a permanent lagoon so you can do water activities and game drives year round. The rooms are HUGE - my favorite part being the dramatically elegant central shower draped by a grand canopy of white curtains. Massive balcony with plunge pool, private dining on your deck and a unique modern design style. Game viewing and overall experience was fantastic! #wearewilderness #safariguide #okavango #botswana #botswanasafari #travelgram #safariblogger #africasafari #overlanding #explorebotswana #africansafari
Follow The Adventures of G & T in AFRICA on WordPress.com