Wadi Rum is a large desert valley that has been carved into sandstone and granite rock cliffs covering an areas of 720 km² in southern Jordan. It is a very special place both because of its remoteness and because the landscape it like nothing else you can find on earth. It really makes you feel like you are on another planet. In fact, Wadi Rum has been used as the landscape for Mars in multiple movies – most recently The Martian. However, it first became famous as the film site of Lawrence of Arabia in the 60s. Along with Petra, it is one of the most commonly visited sites in Jordan. Activates include desert hiking, rock climbing, 4×4 trips, camel rides, horseback rides, and Bedouin camping. 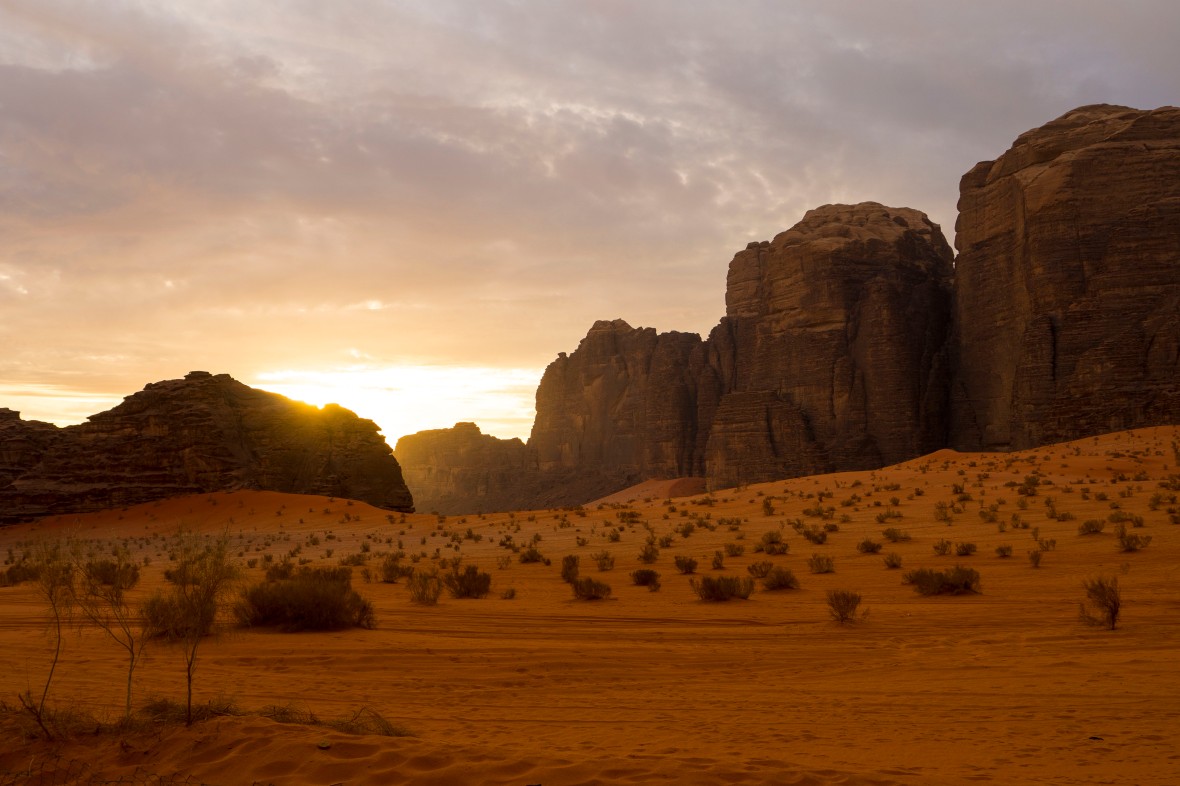 We got to Wadi Rum via taxi from Petra. This was easy to organize – there are plenty of taxi drivers around just hoping for the chance to take you to your next destination in Jordan. It cost 40 JD and took about 2 hours. You get dropped off in the main town center of Wadi Rum Village and thus must call your guide ahead of time to meet you there. Taxi drivers know this and will offer to call for you.

Our camp was about a 10 minute ride from the main town. Wadi Rum Nights is marketed as an upscale luxury camp which offers the unique experience of sleeping under the starts in a bubble dome tents. There are plenty of similar and cheaper Bedouin tented camps throughout Wadi Rum – we chose this one specifically for the experience of sleeping in a star bubble!

There are 12 bubbles and they seem to book out most of the time so make sure you book well in advance if you want to stay here. We paid 170 JD per night which is significantly more than any of the other options in the area. I felt like it was totally worth it for the experience.

We were given bubble #11 which is supposed to be the best one due to its slightly larger size and a better view because it is on the end. Each bubble is set up on a wooden platform with a porch and bean bags for relaxing. The bubble is set up like an igloo with a entrance chamber that has two doors. You cannot open both at the same time or the bubble will deflate because it is kept open by a constant fan sucking in air. We saw a few other guest make this unfortunate mistake and end up with a deflated bubble. 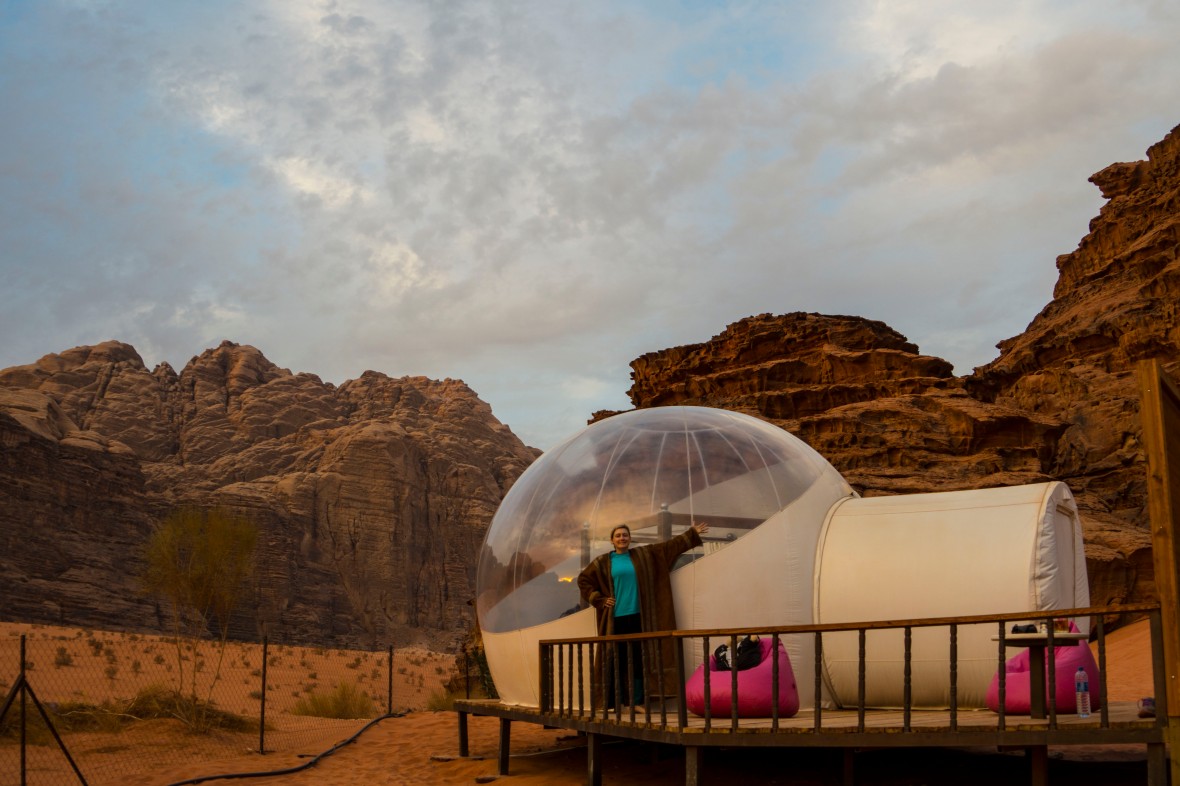 The inside is small but has everything you could want. A queen sized 4 post bed with side tables, a coat rack, a air con/heater, a separate bathroom with a sink, mirror, shower and full toilet. They provided a set of bathrobes and also a set of Bedouin robes for guests. I LOVED the Bedouin robes and if we could have possibly fit one in our bags I would have bought one to take home!

Almost immediately after arrival, we set off on a 4×4 tour. We only had one day in Wadi so this was the best way to see the most scenery. The tours are run by local Bedouins and there are set routes and set prices. But still be sure to clarify the length of your trip, the spots you will visit and the cost prior to departing….we made the mistake of being too trusting and our guide tried to screw us over with the cost. 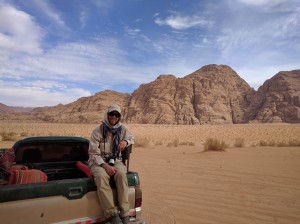 Most of the 4x4s are pick ups with the truck beds fitted with benches. It is a pretty bumpy ride but lots of fun and the best way to experience the desert. We did a 4 hour trip and stopped at a few key sites where we hiked up to view points and over natural arches. Even though the geography of Wadi is similar to areas in Utah like Canyonlands – it still feels sooo different. Wadi is a vast empty desert studded with random massive rock formations. There is just nothingness as far as the eye can see. Except for a few trucks, camels and Bedouins here and there….you are entirely alone. Almost no life exists out there. If you want a place to clear your head and think about life, this is it.

We returned back to our bubble village for sunset and dinner. The camp served buffet style meals with traditional Jordanian cuisine. It was good but nothing spectacular and certainly not 5 star quality. The only option for alcohol was a local beer which tasted like camel pee! No joke! We were pretty sure it was non-alcoholic. Definitely not recommended. While watching the sunset on our porch we couldn’t help but think how nice a sunset cocktail would be!

After dinner they set up a fire with a lounging area on the cliffs above the camp. It was mainly for smoking shisha (hooka) but they also served Bedouin tea, played music and the hotel staff keep us entertained with local dancing around the fire. 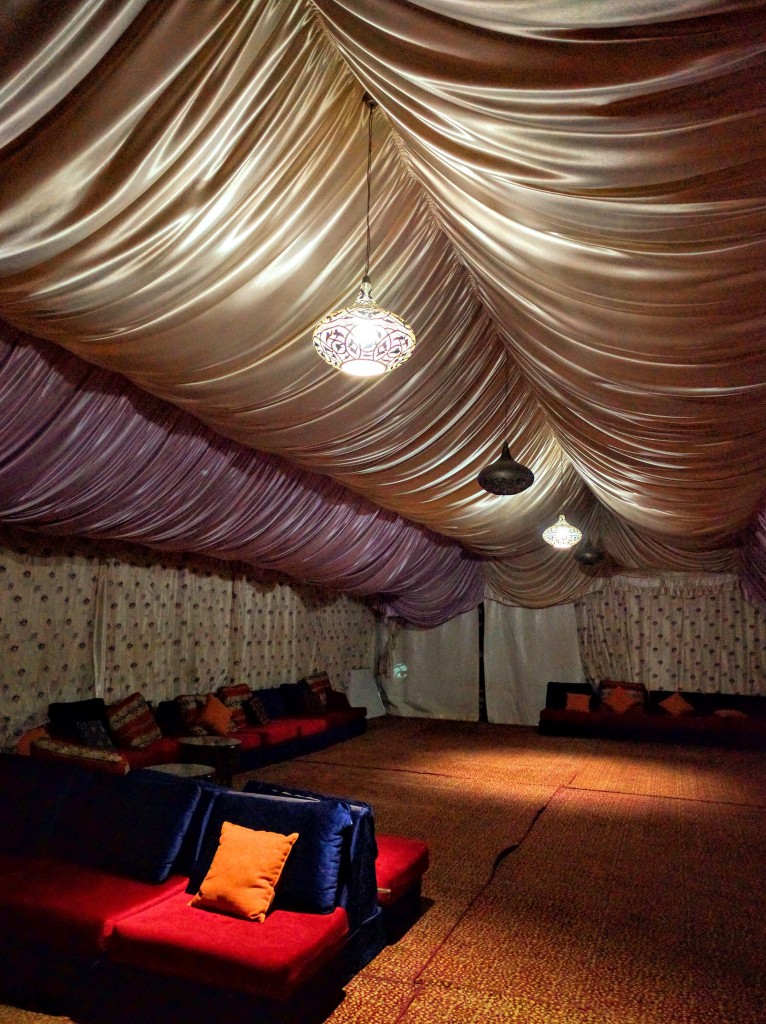 We ducked out early so we could focus on the main event – the stars! Thank goodness the sky was clear for our night in Wadi Rum – it had been cloudy for the week prior and we would have been devastated! We just got a new wide angle lens are were pretty excited to try it out for star photography. The stars were beautiful but there was actually a lot of light pollution from our camp and from the nearby village so they were not as sharp and crisp as they could be. 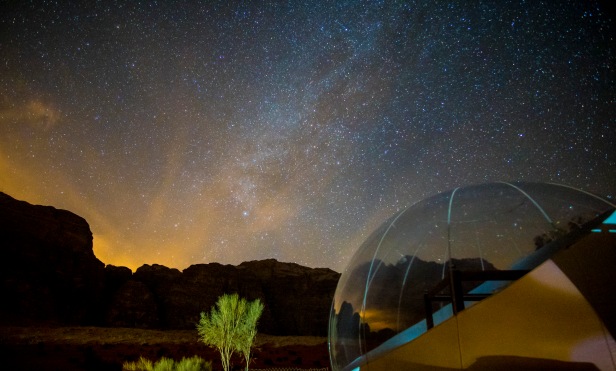 Honestly we are so spoiled by the night sky in Botswana which I will continue to argue has some of the best star viewing in the world! But what we haven’t been able to do yet in Botswana is sleep with a perfect view to the night sky. The starbeds we have done on safari are covered in mosquito netting so you don’t get a view to the sky.

caught garrett coming out from the bubble bathroom!

Sleeping in the bubble was better than I imagined it would be. The visibility was great and I really just didn’t want to close my eyes because the view was too good. Garrett saw 3 shooting stars! We finally did fall asleep and slept surprisingly well. The bed was very comfortable (for a bubble bed). We woke up at dawn to watch the sunrise. Once the sun did come up it didn’t take long for the bubble to become a magnifier for the sun – you definitely cannot hang out in there during the day without a cover or you will fry!

sunrise from the bubble bed!

We loved our time at Wadi Rum Nights. I think one night was perfect there. If you wanted to do more activities like longer hikes or rock climbing, you would need multiple days, but I think one night in the bubble was enough. However, we wouldn’t have stayed at that camp had it not been for the bubbles. The manager was very disorganized and in a constant state of distress. We didn’t feel like anyone really welcomed us or helped answer any of our questions. We didn’t think the food or amenities lived up to the “luxury” standards they promote. If not for the bubble experience, we would have much rather stayed in one of the more remote tented Bedouin camps located deeper in the park which are much cheaper and more authentic.

Jordan is a wonderful country and I highly recommend visiting. The people are very welcoming, warm and helpful. It is very easy to get around and rare for you to get ripped off or be in harms way. The only downside is that it is relatively expensive (or at least more than we expected).