Maun is a village in the northwest of Botswana. It’s the biggest base for tourism in Botswana because it is the gateway to the Okavango Delta (known locally just as “the Delta”). Most people that visit Botswana make it to Maun or Kasane and never see Gaborone where we live. I have been trying to set up an outreach dermatology clinic in Maun since I arrived in Botswana. The villages in the northern part of the country – especially surrounding the Delta are extremely neglected in terms of healthcare – particularly specialty care. There used to be programs to support physicians to fly up to Maun for clinics, but since the healthcare budgets have been struggling in the past few years these programs have all been cut. There also used to be a private airline company that would fund physician’s outreach trips in Botswana. However, their funding has run out too. So after petitioning the MOH over and over and getting nowhere, I decided just to pay for my own trip.

I wanted to at least visit the hospital to understand how much of a need there was for dermatology, what potential there might be for training and to spend some time teaching health care providers how to access dermatology care by teledermatology consultation. I have been using Whatsapp for telederm consults for over a year and it is working very well. It provides an easy mechanism for providers to quickly have questions answered or more importantly triage patients into our dermatology clinic in Gabs or our other outreach sites of Lobatse, Mahalapye, Mochudi or Kanye.

The visit to Maun was very eye opening. I am always amazed when I visit outlying hospitals. You would expect them to be small, sparsely staffed, and much poorer than the largest primary referral center in the country that I work at. However, shockingly this is not the case. Princess Marina Hospital, where I work, was the first hospital constructed in Botswana. It was designed based on the old colonial style hospitals. There are separate wards connected by long outdoor corridors allowing lots of room to let air flow in order to control the spread of TB and other infectious agents. The wards are much too small for the patient population this hospital supports. Patients are crowded into small corridors. There aren’t even enough room for the number of physicians in the outpatients clinics. The rooms are tiny and are jammed with dilapidated equipment. There are temporary trailers which house the Infectious Disease clinic – which is one of the most important parts of the hospital.

The government hospital in Maun

Every hospital that has been built since Princess Marina has been a major improvement. They look more like modern hospitals with indoor wards, more spacious rooms and most have two stories. I was amazed at how open and clean the hospital in Maun was. The hallway corridors were huge and mostly empty. PMH is always bustling with throngs of patients and families. Most mornings I can hardly get to my clinic room for having to fight my way through all the patients waiting for care. In Maun the clinic rooms were huge and open. They have modern exam beds, a sink, counter space and a desk. They were even large enough for me to do minor surgeries. Most importantly, they were individually separated. A large problem at PMH is that clinics rooms are interconnected so you don’t have privacy and people can barge in and out of your room during clinic (my clinic gets interrupted anywhere from 10 to 30 times each day). 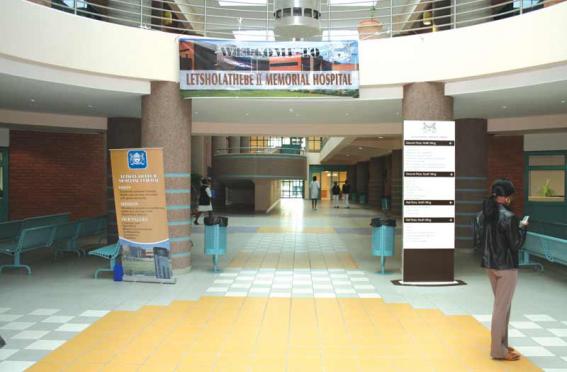 In Maun, I worked one day with the hospital’s chief medical officer who was incredibly excited about my visit. He eagerly listened to everything I said and was so grateful for what I was able to teach him. This was very refreshing for me! It is rare that I get any appreciation for teaching from students, residents, physicians or other health care workers in Gabs. On the second day I worked with a nurse. I shockingly found out that she had been functioning as a the “local” dermatologist and running her own clinic at the hospital. She used to work with a Cuban dermatologist who was stationed in Maun for a few years. After he left there was no one to take care of the derm patients so she was forced to use what she had learned to do her best to care for patients. I was floored. She was independently trying to learn and provide care to the best of her ability, while I could not even get a nurse to work with me on a regular basis at PMH…let alone teach them anything. She soaked up every word that I said and was so grateful to spend any time with me. I just couldn’t believe that there was someone who wanted to learn derm who I could have been training during my time in Botswana. Such wasted opportunity.

I attended the hospital’s morning report where cases are presented each day. I was quite impressed at the level of thought and care that was being provided to patients compared to PMH. Also surprised to see the doctors and nurses utilize the EMR in ways I didn’t even know possible. I gave a lecture after morning report and was pleasantly surprised to see how intensely the audience listened and how thoughtful their questions were.

Overall it was an eye opening experience. People think Maun is basically “the sticks” and might assume that people would not be as advanced with healthcare — but everything that they were doing seemed so much more organized and advanced than PMH. They were also so kind and grateful. What causes me the most burn out in Botswana is the apathy and lack of appreciation for anything that I do. I often feel used and abused by patients and the healthcare system. I honestly wish I could work in Maun or an outlying hospital where the staff would be more caring and the overall atmosphere would be less hectic. I am so glad I bit the bullet and paid my own way to visit the hospital in Maun. It gave me a different perspective on the healthcare system in Botswana and solidified my thoughts that the dysfunction of PMH has a lot to do with the inherent attitudes of employees. I believe if individuals could be transported to a different work environment, where good work was rewarded, coworkers pushed each other to improve and healthcare workers had role models that were compassionate and conscientious…things would be much different. Environment has a huge effect on the mind. Being in a negative situation can poison even the most hardworking, high integrity person.

During our time in Maun we stayed at a Motsebe Backpacker Lodge. In the past we had stayed at Old Bridge Backpackers which is quite lovely. It is situated on the river, has a bar and restaurant and each tent is linked to its own bathroom. We chose Motsebe instead to save maybe $10 and try something different. Big mistake! This place was  awful. The tents were basic and you had to use a poorly equipped shared bathroom. The grounds were dirty with a dead mice outside our tent. There was no bar or restaurant at the lodge and you were not in walking distance to any food or shops. The management was poor and the place was filled with the smell of marijuana smoke. If you are looking for a budget option in Maun – stay at Old Bridge!

One thought on “Outreach Visit to Maun”