Finally, the Defender was up and running and ready for its first big trip! And we were lucky enough to get to join in with a group of local friends for a weekend camping trip to Khutse.

Khutse is a small game reserve called “the gateway to the Kalahari” – because it is the first part of the vast Kalahari that you reach when you drive from Gabs. It takes about 4 hours and used to be a rough ride but road renovations in the past few years have made things much more comfortable. However, the Defender isn’t exactly a smooth ride……

I was absolutely terrified to drive in this thing! Garrett has done most of the repairs and it seems like once something gets fixed….something else breaks! I was so worried we were going to break down before we even got to Khutse – or worse yet break down on one of our game drives and ruin the whole weekend. Well…thankfully that didn’t happen. But our drive was not entirely smooth sailing….. For about the last hour of the drive you travel down a dirt road that really has nothing but some animals and donkey carts carrying farmers back from their cattle posts. We were making good time cruising along past lots of cows and goats. It is pretty standard that cows tend to stay put where they are when you drive past, but for some reason one cow seemed to have a death wish and ran straight for us as we drove by. Agh it was terrifying! There was not enough time to swerve and thankfully Garrett didn’t do this because we likely would have flipped the car. The cow slammed into the corner of the front bullbar. I assumed when I opened my eyes that the front of the car would be destroyed and the cow would be dead. But astonishingly the front of the car was fine – just a dent to the corner of the bullbar! AND the cow was still standing and walking. Who knows how this is possible. We didn’t know what to do. We definitely did not want to stick around and get involved in some dispute with whoever the cow’s owner was and since he seemed ok we just kept driving. If we would have been in any other car – it would have been totaled and we could have also gotten really hurt. The defender really is a BEAST!

When we rocked up to our camp and told our friends the story they decided to call the defender the “Yellow Peril” since it almost killed something on its maiden voyage. We had already been calling it “Big Bird” but this name seemed more appropriate when out in the bush.

Khutse does not really look like a desert at all. It is a vast open savanna covered in short scrub and trees. There are various “pans” which are remnants of ancient lakes. Their salty bottoms now only grow short grass making them big open areas that are great for game viewing. Khutse is supposed to be famous for lions. Not just any lions – the great black mained lions of the Kalahari.

Garrett has been talking about these lions even before we moved to Botswana. Khutse is one of the best places for seeing them up close – often too close! Prides of lions often stroll into people’s campsites. There are videos of campers waking up to lions licking the sides of their tents. Most people would be terrified of this – but Garrett and I have been dreaming of having this opportunity. There just aren’t that many places in the world where you are allowed to just roam free with wild animals and no gates. Botswana is truly one of the only places left where this possibility still exists – which is why it is so special! Our hopes were high for seeing lions but alas no luck! Because there was so much rain this year the grass is really high making it hard to see animals. Also the lions have scattered all across the Kalahari since they didn’t have to stay crowded around a few water sources. Although we didn’t see lions – we saw elephants which is really rare in the Kalahari and again a result of the rains this past year.

The most spectacular thing about the Kalahari is the incredible stars at night. It is pitch black so you really can see the twinkle of every little star. We taught our friends how to light paint and did some fun photos in the dark. I’m still working out the kinks on my star photography so no good ones to show yet. 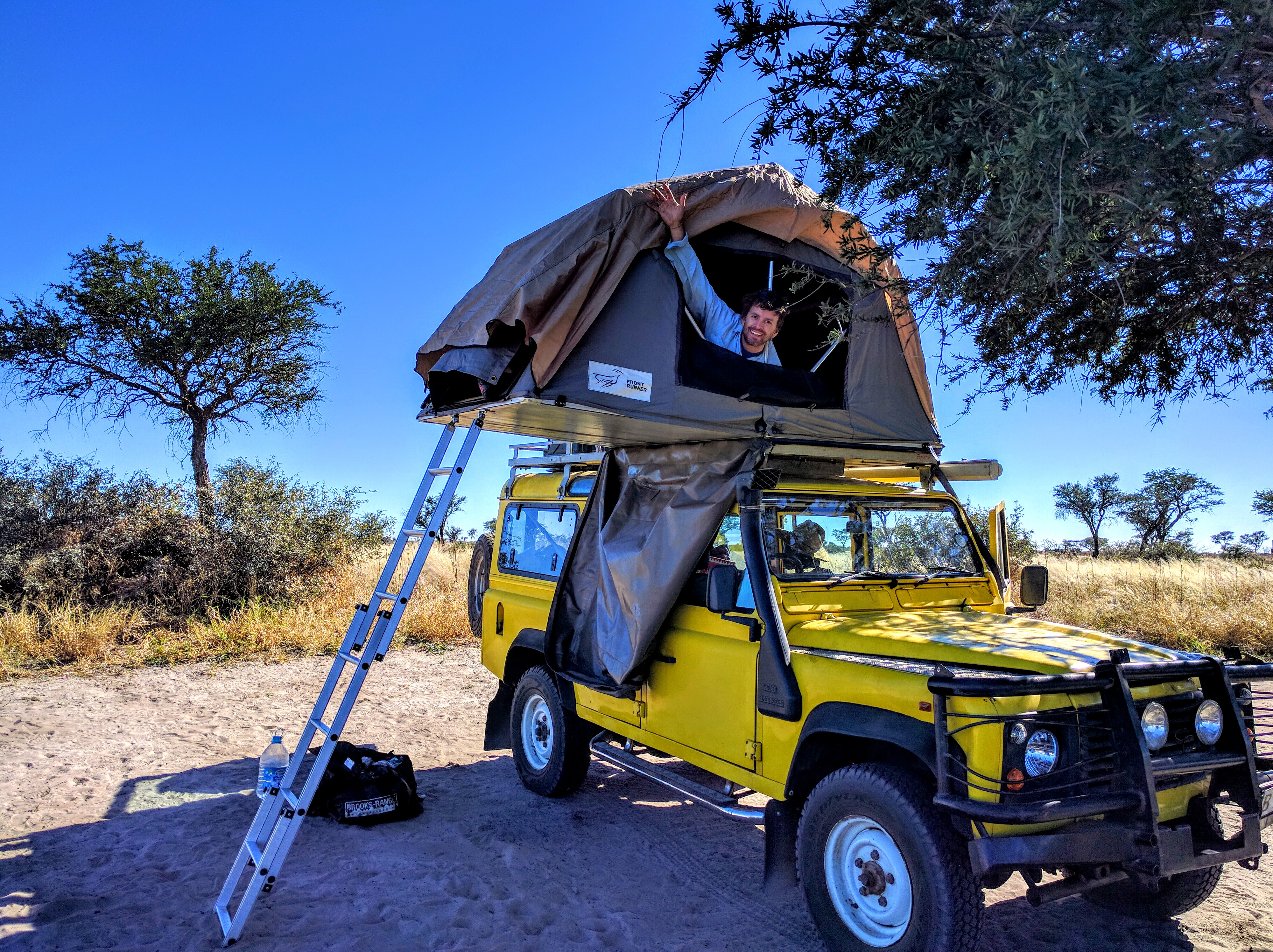 This was our first camping trip with our new gear including our rooftop tent. I was pretty excited to try it out. I thought is would be pretty cramped but actually it is really quite roomy and comfortable. The only bad thing is having to climb down the stairs at night when you have to go to the bathroom! Trying to navigate the stairs and worry about the fact that a lion or hyena might be waiting at the bottom for you is pretty daunting! We are working out the design for a little port-a-potty to mount on the roof for me!!

This trip was also the first time we have ever gone camping with children! Which to us was more scary than the thought of lions in the camp! Not just one kid but 5! Luckily I knew 3 of the kids and liked them….but you just never know what is going to happen on a trip. Are they going to be screaming and running around the whole time? Are they going to be staying up all night? Are we going to have to do activities with them all day? We were pleasantly surprised with how well behaved all of them were and that they really just entertained themselves. The oldest child was 12 and he is actually incredibly mature and well behaved. Also the little ones went to bed after dinner at 7 and we didn’t hear a peep out of them until morning. All of this was a very welcome and pleasant surprise!

My impressions of the “Yellow Peril” after this first trip are that it is very safe and likely to keep us alive in any accidents. It is very spacious and convenient for packing. Garrett installed pull out drawers and is going to install cabinets along the side windows which will make things even easier to organize. We also have a table that slides up to be stored in the roof which is very handy.  The coolest part is that at any time I can just hop out of the car, climb up on the ladder and just hang out on the roof. This is handy for sunset viewing and for checking out game. The bad part is that The Yellow Peril is not very comfortable. It’s a rough ride – loud and bumpy. Also – the front is not sealed very well yet so dust can leak in through the vents – really annoying to be covered in sand all the time! Garrett has been working so hard to get this car into shape – I’m glad it survived its first trip but I still am not fully confident in its reliability. We will need to test it out a few more times! We’ve got another trip to Khutse planned for September so we will update on how the second time around goes! Fingers crossed for LIONS 🙂