When you say the word Zanzibar – I think it inevitably evokes visions of some fantastically exotic land of wonderment. And the reality is not far off! Visiting Stone Town is like walking back in time. The historic capital (also a World Heritage Site) is a labyrinthine maze of narrow cobblestoned alleyways that are packed with a menagerie of sights, sounds and colors. Everywhere you look are signs of the rich cultural history – a blend of Swahili, Arabic, Portuguese, Persian, Indian and British cultures. From the bustling spice market to the turreted palaces to the iconic dhows floating in the crystal clear turquoise waters – Zanzibar is a true paradise for the senses! 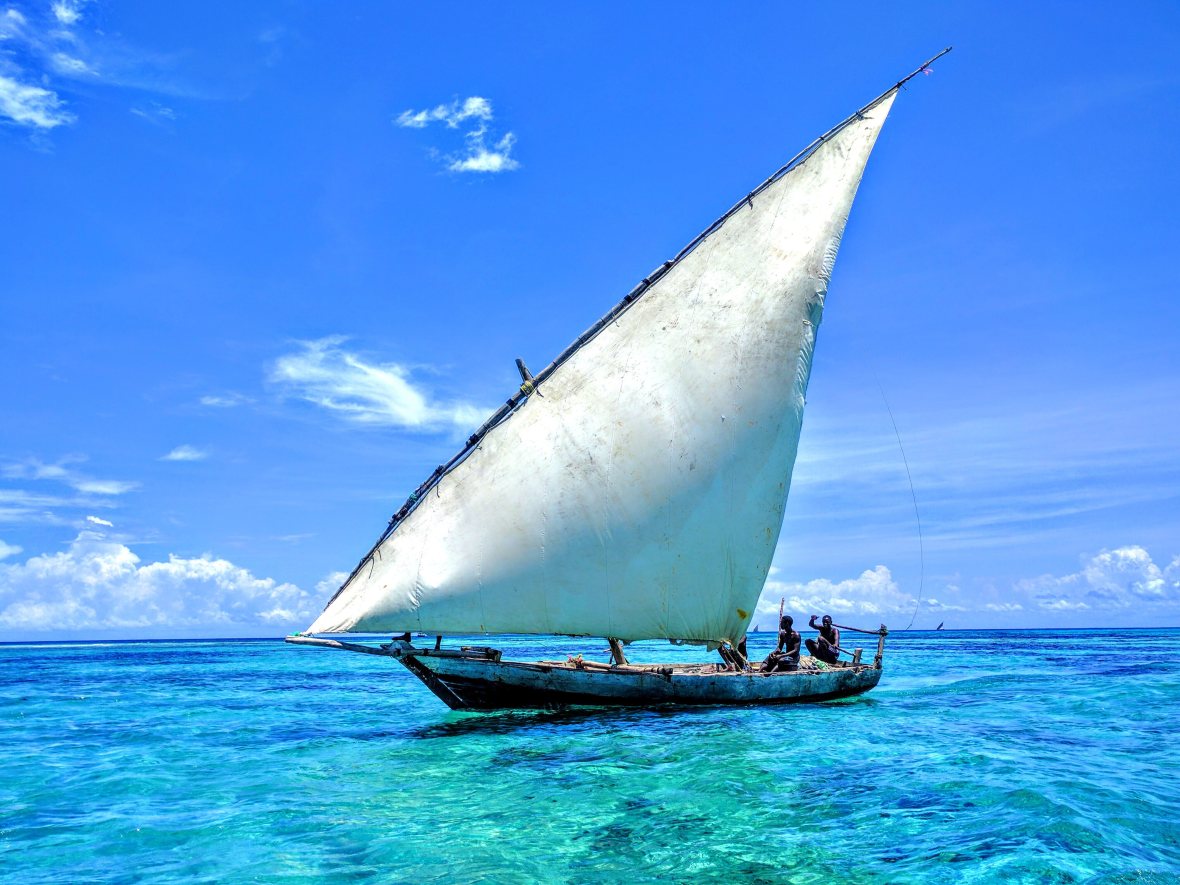 When I found out I was going to be visiting Tanzania for the second time, I knew we could not miss out on Zanzibar. Luckily the timing lined up perfectly for Garrett to meet me there for the weekend of our 2-year anniversary. Since we got married on an exotic island (Ko Phi Phi Thailand), it has been our dream to visit a new island paradise every year for our anniversary….so far things have worked out – last year it was the Seychelles and now we can tick another one off the list – Zanzibar! Our main goal was diving so we arrived by flight into Stone Town, spent a quick morning walking around and then drove up north. Garrett arrived one night before me and stayed at the Protea Mbweni Ruins – which was amazingly built into the remnants of ancient ruins and looked like an awesome hotel. 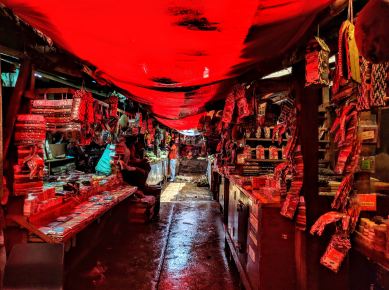 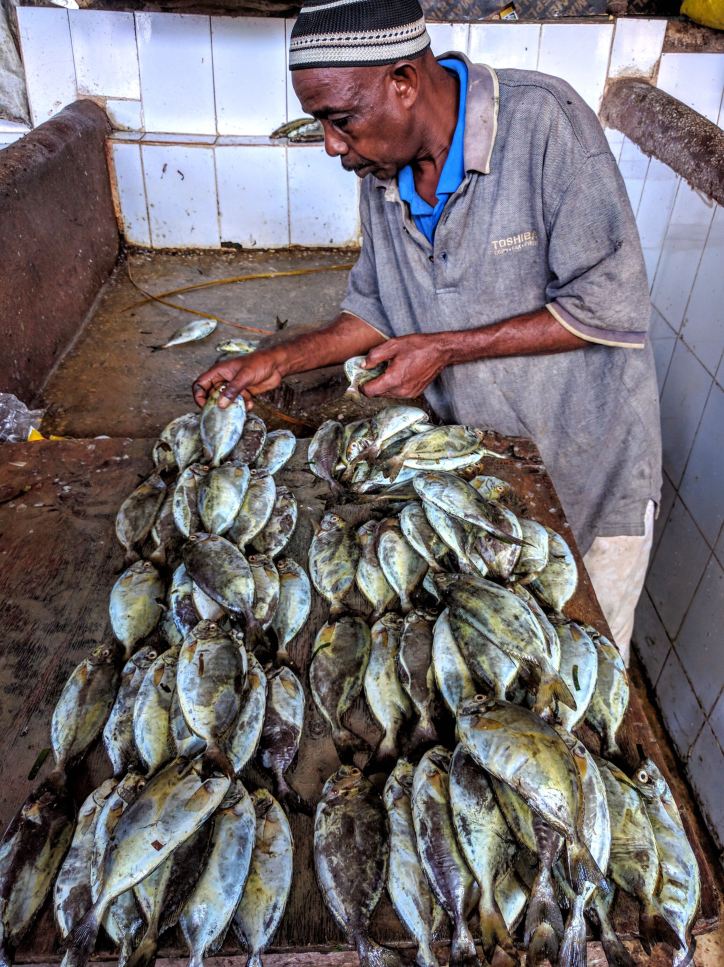 We rented an air bnb on Nungwi Beach at the northern tip of the island. It was a simple house – a few steps from the beach with a nice king bed, large bathroom…. but pretty non functional wifi. We decided to dive with Fun Divers Zanzibar which is a new diving company started by a local. It is the only dive company not owned by expats on Zanzibar. The owner used to be a fisherman, then inadvertently fell in love with diving and started working for a dive company. After many years with the company, he was not being promoted to a higher level of pay despite more job responsibilities. So he decided to take a HUGE risk and borrow money to start his own company. With little more than a high school education, he taught himself how to build a business. I was incredibly impressed with what he had accomplished. These are exactly the type of people we try to find and support when traveling. When you support locals – you support the environment and help secure its protection by future generations. Almost all the locals in Zanzibar are fishermen – mainly because there just aren’t any other options for jobs. Overfishing is a huge problem that will eventually lead to complete loss of sea life around the island. By showing other locals how much there is to gain financially by protecting sea life, this entrepreneur is encouraging others to give up fishing and pursue other job ventures. 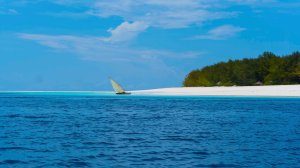 We spent one day diving in Mnemba Atoll on the northeast side of the island. The atoll offered beautiful scenery and the visibility of the dive sites was amazing. We dove Wattabomi and Kichwani and saw lots of nudibranches, mantis shrimp, an octopus, scorpionfish, snake seahorses and a spanish dancer. The best part was getting to swim with two dolphins in the crystal clear water! On the way back we hit Kichafi dive site and saw some rays, a yellow leaf fish, a torpedo stingray and more octopi. The next morning we added on two closer dive sites on the north side of the island – House of Turtles and Magic Reef. Highlights were a black sea horse, lots of turtles, a crocodilefish and weedy scorpionfish. We liked diving in Zanzibar much better than the Seychelles. The visibility was better, the coral was healthier and there was much more diversity of sea life – we saw number of species for the first time!

The Nungwi Beach area is a pretty chill strip of hotels and restaurants along the northern tip of the island. Lots of cheaper backpacker places to choose from – but many looked pretty run down. The coolest place we found in the area was the Essque Zalu Zanzibar. This place was so fab! It had a huge traditional thatched roof as the main lobby ceiling and the rest of the place decorated with sleek modern designs. We had fantastic sundowners at the pool bar and then ate dinner at the main restaurant. Both were superb! If we ever go back to this area – this is absolutely where we would stay – a bit more expensive but totally worth it! 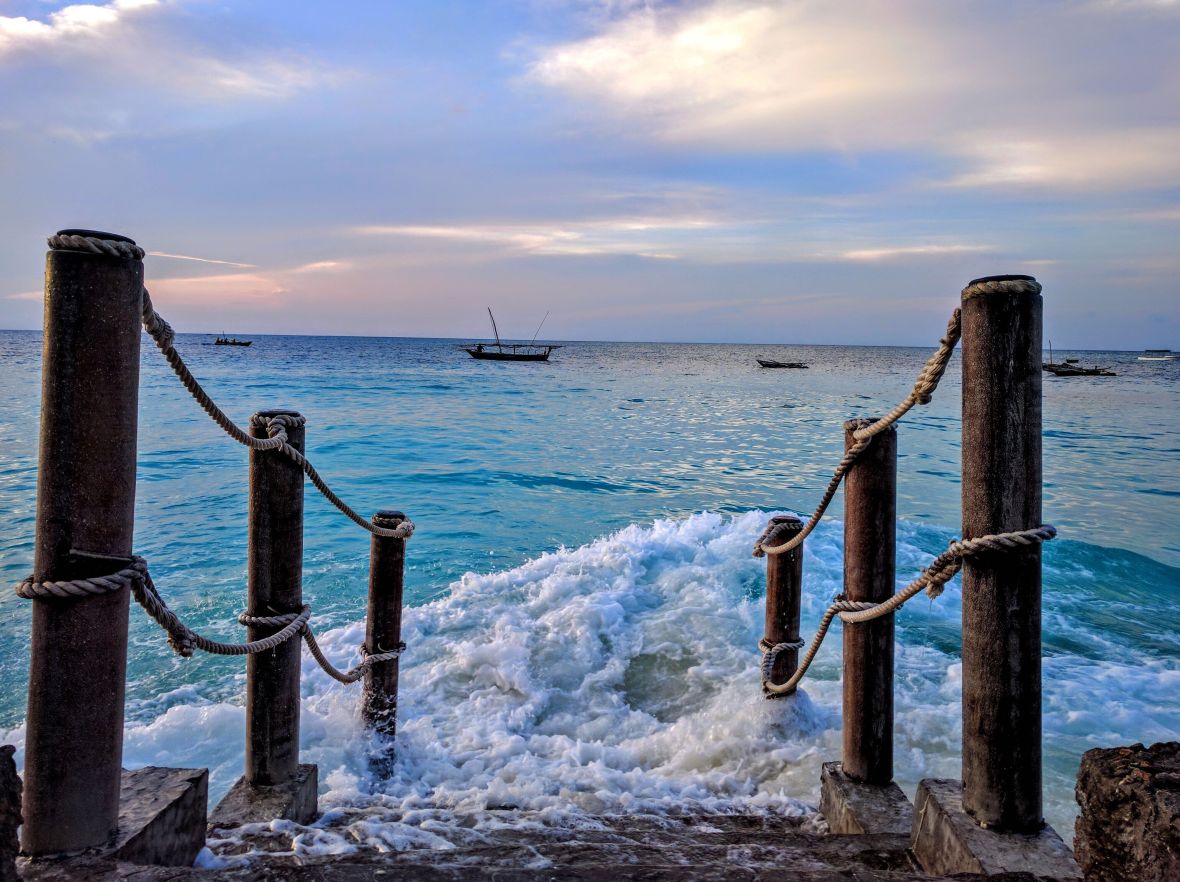 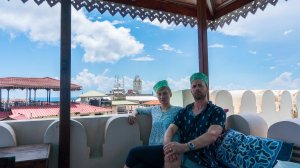 Regal faces in our penthouse palace

After two nights on the northern coast, we spent one night in Stone Town at the Emerson on Humruzi. This historic hotel is the restored palace of a rich arabic merchant from the 1870s. The décor is very traditional and makes you feel like you have been whisked away to ancient Oman. Each room has a theme and is uniquely decorated – a difficult feature to find in hotels these days. We stayed in the “Keep Suite” which is basically the top floor of one of the palace towers. Although our bedroom was small, we had a two level balcony and a whole private rooftop gazebo to ourselves.

dinner at the Tea House

We celebrated our anniversary by sipping champagne and watching a dreamy sunset over Stone Town. We then had dinner at the hotel’s rooftop restaurant called the “Tea House.” This restaurant lets you experience the unique blend of Omani and Persian cultures that have come together in Zanzibar. We sat on silk pillows on the floor, got served on small wooden tables and were entertained by a traditional Taarab band. The food was very unique – lots of new flavors and textures – but all delicious! The overall experience was wonderful – would highly recommend it. 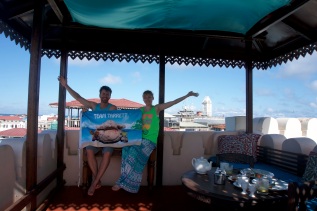 On our final morning we were served a fabulous breakfast spread on our rooftop. I could have spent all day there just starting out across the rooftops of Stone Town. Our memories of this wonderful room will be with us forever! If you aren’t able to get a room at Emerson on Humruzi – their sister hotel is Emerson Spice. We visited there as well and found it to be just as beautiful and with a similarly awesome restaurant! You couldn’t ask for better service at either hotel – they really do treat you like royalty!

Hotel Tour of Emerson on Humruzi 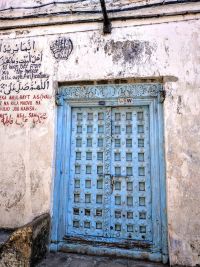 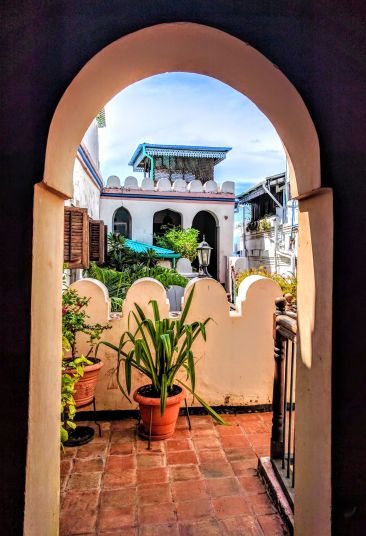 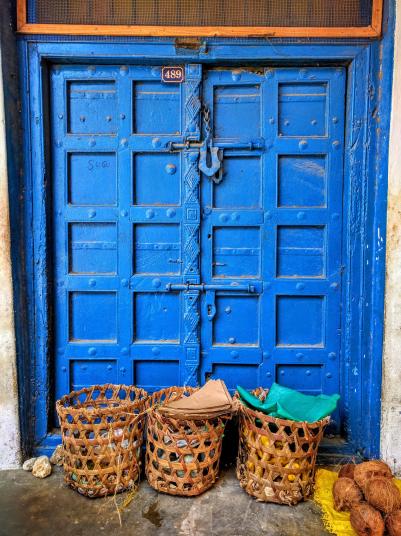 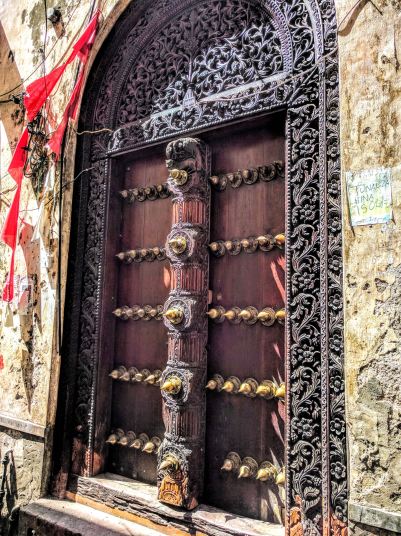 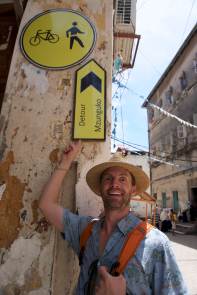 We spent our last day wandering the maze of streets in Stone Town. My favorite part ofthis city is the beautiful mix of architectural styles and the stunning array of ornate doors – oh the doors! I could spend a lifetime admiring these doors – so many colors, patterns, shapes, styles! Each one seems to have its own story to tell.  You really do feel like you have been taken back in time….until you momentarily get jolted back to reality by noticing the yellow arrows marked “Muzungu” and realize you are really just white kids in a tourist town LOL.

We visited the local bazaars, spice market and several of the iconic historic buildings. We were most impressed by the Slave Market museum. I had little prior knowledge of the east African/middle eastern slave trade and did not realize what a huge portion of all slavery originated in this area. Behind all its beauty, Zanzibar hides a dark and disturbing past as the center of the East African slave trade. It was horrifying to learn of the practices of the slave traders in Zanzibar. Most disturbing was seeing the tiny underground chambers where all slaves were forced to spend at least 4 days chained up without food or water. 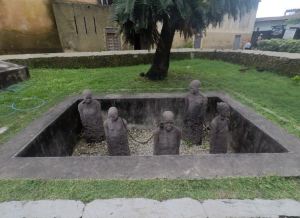 The goal was to see who was tough enough to withstand this type of torture. Those that made it would fetch a higher price. Those that didn’t were either killed or sold for a much lower price. Horrendous. History places the lion’s share of the blame for the evils of slavery on West African/American slave trade. However, the Arabic slave traders were active in East Africa long before the west African slave trade started and long after it ended….and for some reason nobody ever talks about this! We also found many interesting and disturbing accounts of slaves who were freed but then immediately used all their money to purchase their own slaves and become a part of the slave trade. I just cannot understand how one could endure such cruelty then turn around and do the same thing to others….but I guess this has happened many times throughout history. Money drives many unthinkable behaviors.

Garrett and I loved our time in Zanzibar – great food, great people, great history and you couldn’t ask for more beautiful scenery. Although there is a lot to experience in Stone Town – its is small and do-able even in a weekend. I wouldn’t advise spending more than 3-5 days for your visit unless your goal is to sit on the beach for a few days and just relax….which is a more than reasonable trip plan! 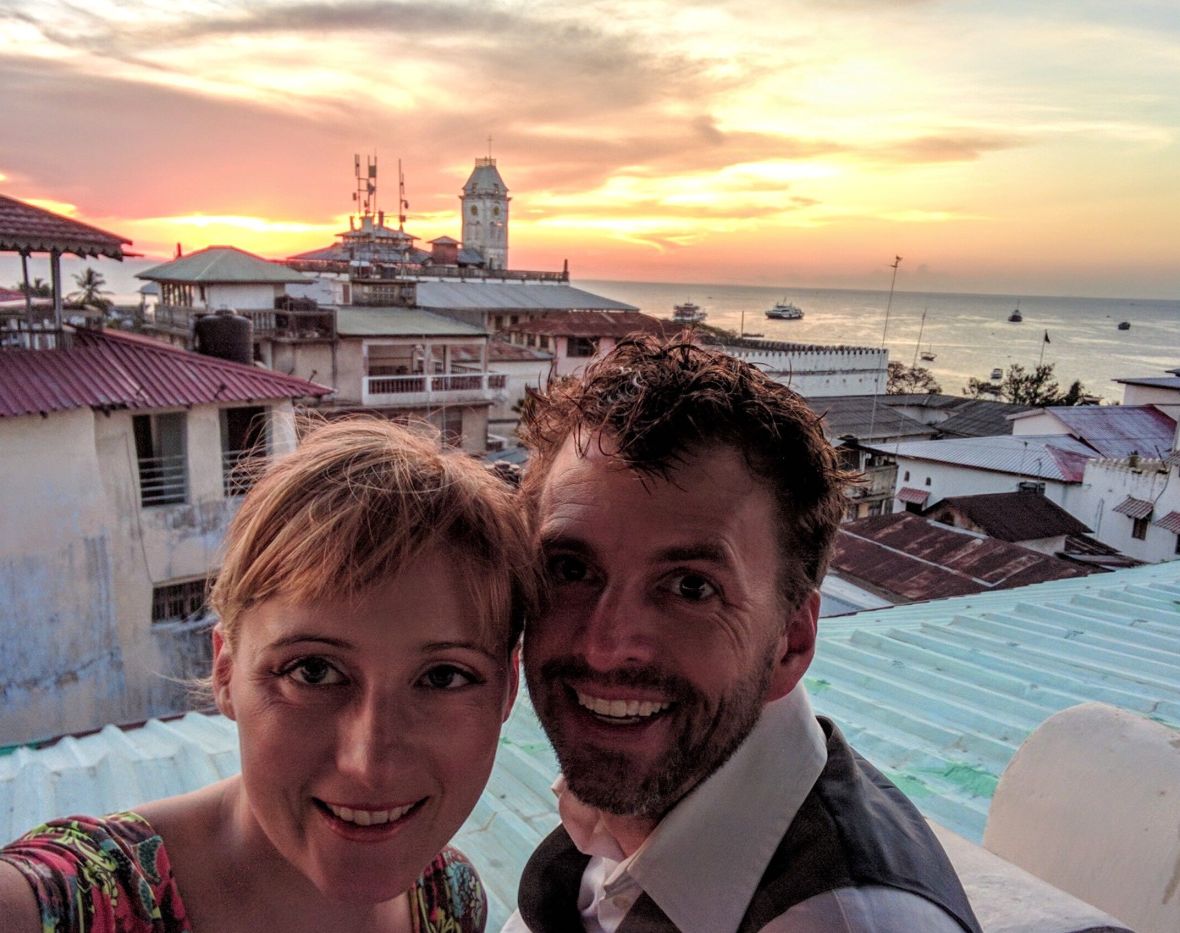 2 thoughts on “Our Two Year Anniversary in Zanzibar”