Botswana is full of random holidays – July especially which has back to back holiday weekends. We used our second long weekend to take a trip down to the Garden Route on the coast of South Africa (which is the nickname for the western coast from Port Elizabeth to Cape Town). We flew into Port Elizabeth on a Friday and spend the first night there.In Plettenberg, we had booked a whale watching tour, but rough seas cancelled the trip! Instead, we spent the day hiking in Robberg Nature Reserve which was fantastic. 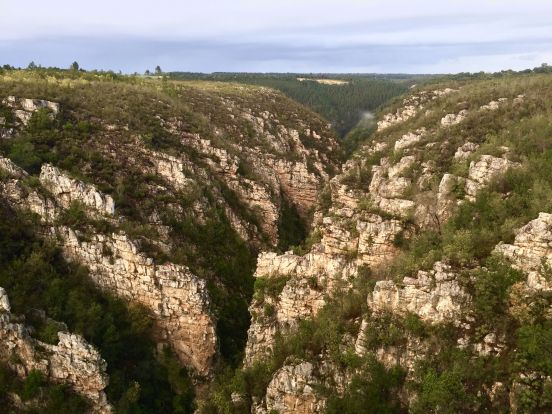 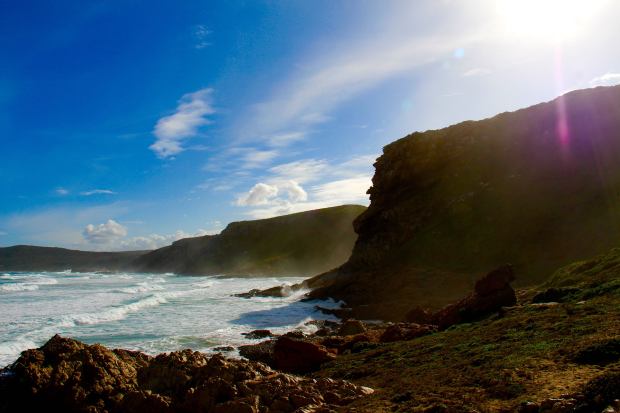 The whole park is on a cliff-like peninsula and we hiked a large loop around it. From the top we could see great white sharks and seals in the water below. We had sundowners on the beach at Lookout Deck Restaurant then had dinner at The Fat Fish – both excellent. We stayed at a super cute air bnb that had a Jacuzzi tub!

On Sunday we started the day in the town of Knysna at the East Head Café – which was maybe the most perfect breakfast spot I’ve ever been to (thanks to Kiran for the rec!).

Knysna is set on a lagoon which is guarded over by two rock formations called East Head and West Head – because… well they kind of look like two faces staring at each other. After getting some good views of the ocean and the “heads” we drove to Thesen Island which is in the middle of the lagoon. The island had a cute village area with shops and restaurants. We then planned to visit a local brewery – Red Bridge Brewery but it was closed! So sad!

So we moved on to our next destination – Wilderness. This is a small town nestled along a beach with cliffs in the background. We had lunch at Salinas Beach Restaurant which had great views and great local beer – a good substitute for the brewery we missed out on.

We tried to make a stop in George for some wine tasting but made big-time fools of ourselves! We showed up to what looked like a winery and had a website which indicated they were a winery/wedding venue. There was lots of activity inside and what looked like wedding decorations everywhere. We went up to the counter and asked where the wine tastings were. The guy gave us a weird look and said he had some coffee for us but there was no wine in the building. He said it was a church! They had just converted it the week before! He invited us to stay for the evening service….we turned around and slunk out of there as fast as we could! Man people need to keep their websites updated!! 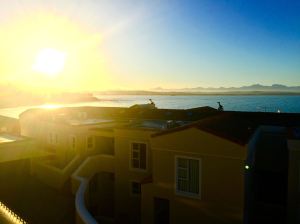 The last stop of the day was Mossel Bay. This was probably my favorite town on the Garden Route. It is situated on a hilly peninsula with houses and buildings perched at all different levels. We had a lovely air bnb cottage with a pool deck that had fab views out to the ocean. We had sundowners at the Blue Oyster Bar which was a perfect spot for sunset views. Then we had dinner at the attached Café Gannet which had excellent seafood.

The next morning we got an early start with coffee and breakfast at Blue Shed Café then walked along St. Blaize’s trail. 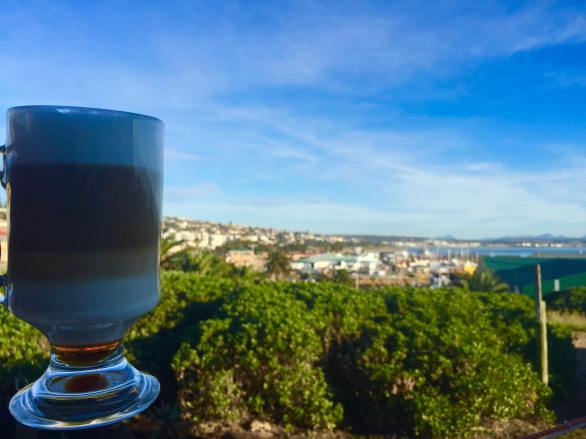 The trail follows along the beach then goes up into the cliffs of the peninsula. It is supposed to be excellent for whale watching but sigh….we saw none. But still a beautiful walk!

Our next stop was Creation Winery in the Hemel-en-Arde Valley. This place was amazing! We had an 8 course wine a tapas pairing along with a wine and charcuterie/cheese pairing platter. We ate and drank for like 2 hours and the total cost was less than $50.  Even after visiting Stellenbosch, Paarl and Franschoek – this is still our favorite winery experience!

Final stop of the day was Hermanus. This is probably the most well known of the towns along the Garden Route. It sits on Walker Bay which from July – November becomes home to over 70 humpback whales who migrate here from the antarctic to give birth and raise their babies. We had such high hopes but alas no whales! It was still a fantastically beautiful town though! We had dinner at the Fisherman’s Cottage which had great ambiance because it was converted from a real life fisherman’s cottage!

The next morning we had breakfast at the Cuckoo Tree which is a lovely local farm fresh café. Then we made a stop at Whale Haven winery for a wine and chocolate pairing. I am not the hugest chocolate fan but I loved this! Their chocolates were amazing – made from unique local ingredients and paired perfectly with the wine. I bought the Fynbos White Chocolate bar which is probably the best chocolate I’ve ever had in my life!

We drove the scenic route to Cape Town around Kogelberg Nature Reserve where you can stop to visit the penguin village at Betty’s Bay. Unlike Boulder’s Beach, this area isn’t as heavily regulated and the penguins actually walk right up to you. It is amazing!

Traditionally the Garden Route ends/begins with a stop in Cape Town but we skipped out on that for this trip and headed right to the airport. This was definitely a whirlwind visit but so glad we did it! We have a huge to-do list for our time in Africa so we’ve got to fit things in where we can! I would recommend the Garden Route soooo highly for anyone visiting this area – it is so easy, cheap and stunningly beautiful! But next time we will make sure the whales have arrived in before we plan our trip!